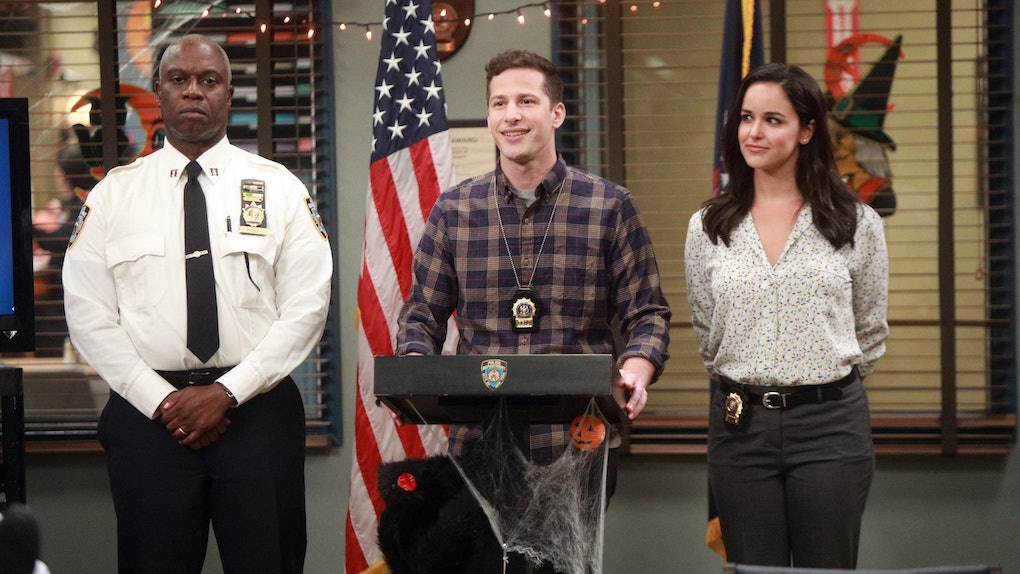 'Brooklyn Nine-Nine' Can Use Bleeped Curses Now, So Season 6 Will Get Wild

Brooklyn Nine-Nine fans can expect a ton of changes when the sitcom returns for its sixth season. Not only is the series jumping networks and shaking up its cast, but it will also sound a lot different from the first five seasons. The show's crew and cast revealed Season 6 will be filthier than ever before, because Brooklyn Nine-Nine can use bleeped curses now.

One of the fringe benefits of Brooklyn Nine-Nine's jump from Fox to NBC earlier this year is that the cop sitcom will actually get some more freedom in its jokes. Series co-creator Dan Goor told TVLine that Brooklyn Nine-Nine Season 6 will be dirtier than before because NBC allows them to use bleeped curse words and blurred images, whereas Fox had a "no bleeping or pixelation" policy when it came to the sitcom. That means that although, of course, Brooklyn Nine-Nine still will not include any actual swearing or explicit images, the sitcom can play with those aspects much more in its new season than it ever could before.

Apparently, this change is already surprising many Brooklyn Nine-Nine cast members as they film Season 6. Terry Crews, who plays the soft-hearted Sergeant Terry Jeffords, admitted everyone needed to take a beat and recover a bit after he delivered a particularly scandalous line:

Some filthy, filthy things have been said. I had one [joke] where I’m ashamed. I’m actually very, very ashamed. It was so jarring that everyone was like, 'Whoa,' and we needed to regroup… But holy cow, we never heard language like that on the show.

This change will also make the show more similar to its spiritual predecessor Parks and Recreation, on which co-creators Dan Goor and Mike Schur first worked together. Parks was a workplace comedy similar to Brooklyn Nine-Nine, and it was able to employ bleeped curses and pixelation to work in even more outrageous jokes. Similarly, Schur's currently running NBC series The Good Place has actually become known for its creative way to work around characters cursing.

Because of this new, curse-friendlier development, Brooklyn Nine-Nine fans can expect the show to feel even more in line with its sibling series, Parks and Recreation and The Good Place.

That is not the only change Brooklyn Nine-Nine's jump to NBC means for the show. The new network already showed some confidence in its acquisition by upping the episode count of Season 6 by five episodes. Although the lengthened 18-episode season is a big order for NBC, it will still be notably shorter than the 22- and 23-episode Fox seasons of Brooklyn Nine-Nine. Another big change is that Season 6 will see the exit of series regular Chelsea Peretti, who plays the sarcastic office administrator Gina Linetti on the show. Peretti posted a note announcing her exit from Brooklyn Nine-Nine will occur at some point partway through Season 6, although she did tease the possibility of a guest cameo in the future.