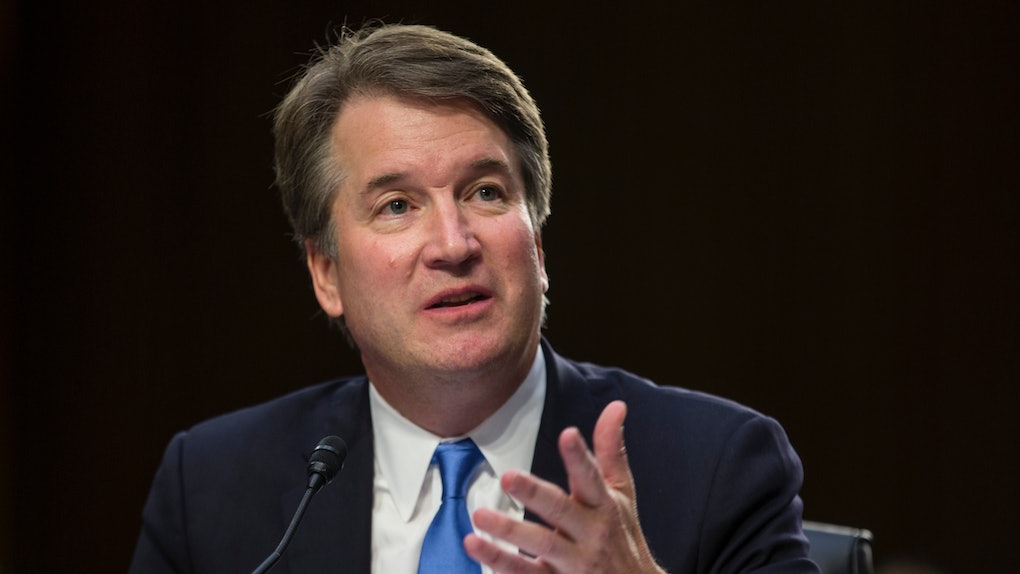 During the week of Sept. 3, Supreme Court hopeful Brett Kavanaugh took the hot seat in preparation for the confirmation hearings that would possibly affirm him as former Supreme Court Justice Anthony Kennedy's replacement. However on Sept. 4, a video went viral of Kavanaugh appearing to snub a handshake from the father of a victim of the Feb. 14 Marjory Stoneman Douglas High School shooting in Parkland, Florida. Well, the man himself has finally addressed this photo, and Brett Kavanaugh's explanation for ignoring a Parkland victim's father is pretty straightforward.

On Thursday, Sept. 13, The Associated Press reported that Kavanaugh claims the reason why he didn't shake the father's hand was because he "didn't recognize" the man as a victim's father and assumed he was a protester. Kavanaugh's response to this inquiry is one answer among the hundreds of written responses that the Supreme Court nominee wrote in in answer to the Senators' questions. He wrote,

It had been a chaotic morning. I unfortunately did not realize that the man was the father of a shooting victim from Parkland, Florida. Mr. Guttenberg has suffered an incalculable loss. If I had known who he was, I would have shaken his hand, talked to him, and expressed my sympathy. And I would have listened to him.

The video in question shows Kavanaugh interacting with Fred Guttenberg, the father of 14-year-old shooting victim Jamie Guttenberg, who was among the 17 people killed in February's school shooting in Parkland. In the video Guttenberg can be seen reaching for a handshake from the judge, and the word "Parkland" can be heard. Kavanaugh stares, not interacting with him, before turning and walking away.

The interaction was especially relevant because of questions about Kavanaugh's stance on gun control. The D.C. Circuit Court judge has had what NPR characterized as a "less hospitable" stance on gun regulation, and in a 2011 dissenting opinion equated the right to bear arms under the Second Amendment with free speech. "A ban on a class of arms is not an incidental regulation," he wrote at the time. "It is equivalent to a ban on a category of speech."

The senators' question about Kavanaugh's interaction with Guttenberg is just one of the many topics discussed during these confirmation hearings. However, it was Kavanaugh's stance on abortion rights that's drawn the most attention. On Sept. 5, Kavanaugh was asked by Sen. Dianne Feinstein about his thoughts on a woman's right to choose. At first, Kavanaugh acknowledged that the 1973 Supreme Court case Roe v. Wade, which legalized abortion in the United States, is precedent and has been reaffirmed by the 1992 case Planned Parenthood v. Casey, which ruled that states couldn't put an "undue burden" on access to abortion. However, on Sept. 6, The New York Times shared a leaked 2003 email from Kavanaugh which suggested he may not consider Roe a "settled law," as he claimed during the confirmation hearing. In addition, he stated in the email that the Court can always "overturn its precedent." Elite Daily reached out to Kavanaugh's office in the U.S. Court of Appeals for comment on the emails at the time, but did not hear back.

Judging from Kavanaugh's stance on women's rights and that controversial photo with Guttenberg, it's easy to assume that the Supreme Court hopeful isn't necessarily the most popular man at the moment. In fact, the first day of Kavanaugh's confirmation hearing started off pretty rocky to say the least, especially since a number of protestors had to be escorted out of the room right when the hearing began.

Next week marks when the Senate Judiciary Committee will vote on Kavanaugh's nomination, and everyone is on the edge of their seats. I suppose we'll just have to wait and see what the future holds for the United States justice system.