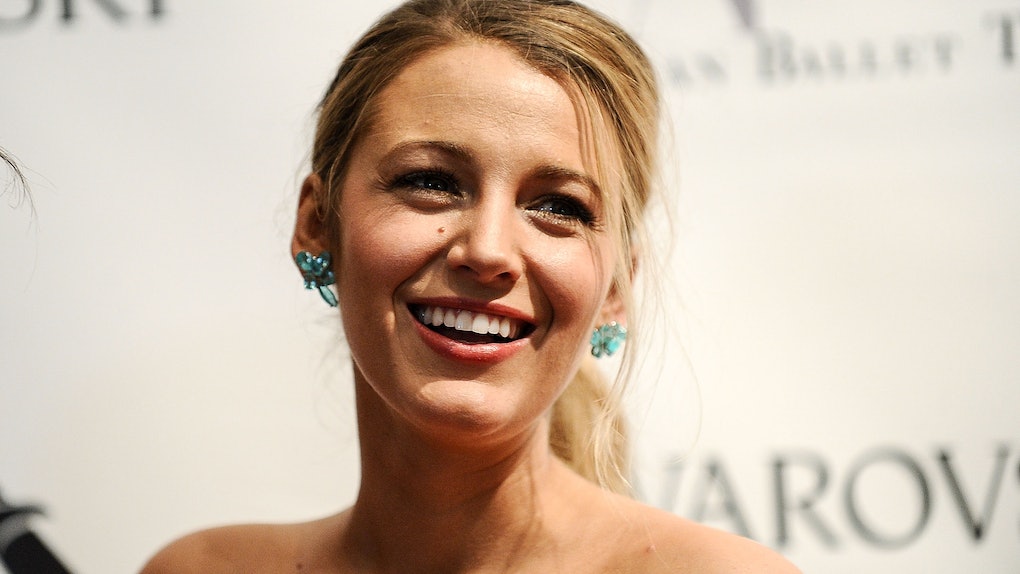 Blake Lively is a style maven, but apparently, she's also an expert doodler. In a Thursday, Oct. 22 Instagram post celebrating her husband's first time voting in the United States, Lively had some suspicious footwear. Upon closer inspection, fans noticed something was up, and lo and behold, Blake Lively drew shoes on herself on Instagram. After her doodled-on footwear was clocked by fans, Lively had a sense of humor about the whole thing.

Since Reynolds now holds dual citizenship in the United States and Canada, the 2020 presidential election was his first official vote. To celebrate, Lively posted a sweet picture of them holding their official ballots. She captioned the post, "It was Ryan's first time. He was understandably scared. It all happened so fast. Like, REALLY fast." She continued, "He wept. I pretended to weep. Then he called all his friends. #voteearly."

In typical Lively style, she made an innuendo out of Reynold's first-ever vote, but fans were more concerned with Lively's footwear than her joke. Her outfit was on point, but something was obviously suspect about her brown heels. The strange appearance of the shoes didn't get past fans, especially since Reynolds posted the same photo, which featured Lively’s bare feet.

Many fans pointed out the differences in the posts on Twitter. "Did...Did Blake Lively photoshop heels in her post," one fan asked. "Someone please tell me I’m not crazy and that Blake Lively actually photoshopped a pair of heels on her feet for her photo," another wrote.

Shortly after these responses had gone viral, Lively took to her Instagram Stories, writing, "Can you tell I was so happy to get outta a onesie and vote? Sure it was an absentee drop-off ballot with a mask covering my look. But dammit I exercised my right to vote. And to not wear shoes that ruined my outfit."

Then, Reynolds posted the photo to his Stories, but this time a pair of drawn-on boots replaced the drawn-on heels on Lively's feet. He added an arrow and a question mark pointing them out. After his troll, Lively shared his post in her Stories and captioned it, "I don't see the issue," before sharing a close-up look at the doodled boots, tagging Christian Louboutin. "Are you hiring?" Lively wrote. "Barefoot iPhone doodler with vast experience avail."

Lively also shared a close-up of her doodle heels on her Stories:

Fans lost it over her doodle shoes:

Shoes aside, Reynolds' original post was also full of joy and levity about his chance to participate in the political process. "This is my first time voting in America. I’d like to thank my wife Blake for making my first time so gentle and loving. It was super scary at first, then exciting and now I’m a little tired. But proud. #VoteEarly," he wrote.

Whether Lively can get Louboutin to pay her for her shoe doodling is up in the air, but at least she and Reynolds know how to keep things lighthearted.