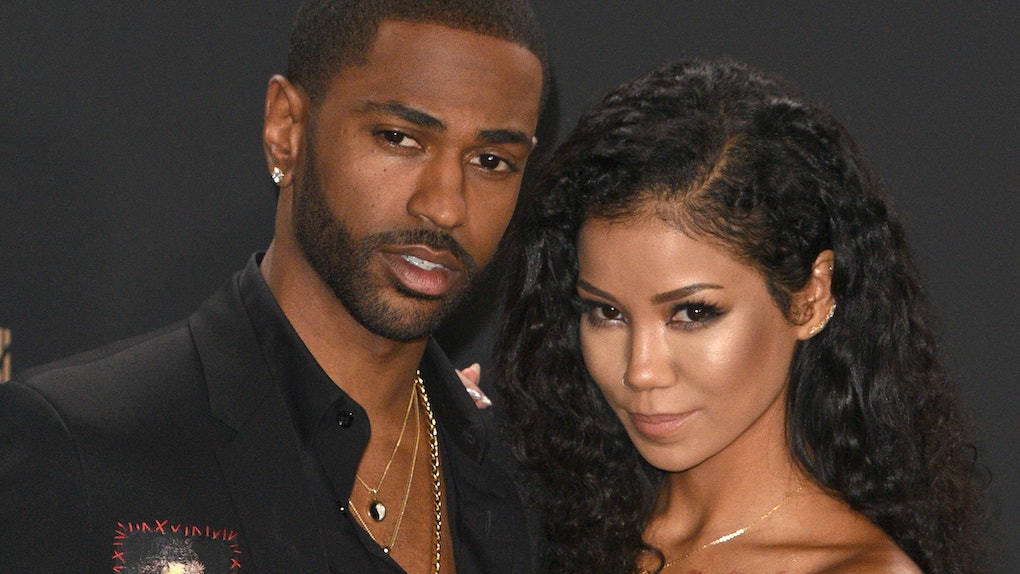 Big Sean and Jhené Aiko aren't just a music industry power couple — they're also longtime friends, frequent collaborators, and IMO, really freakin' cute together. Yes, their four-year on-and-off-again romance has been a bumpy ride, but these two always seem to find a way back together, and that's what counts, right? Despite how much they seem to have in common, their tumultuous relationship history may be due to the fact that Big Sean and Jhené Aiko's astrological compatibility is majorly challenging. Fire and water aren't exactly like peanut butter and jelly, and this fire sign and water sign certainly have their work cut out for them.

Big Sean was born on March 25, which makes him an ambitious Aries. Aiko's birthday falls on March 16, making her a dreamy Pisces. It's amazing how people born a little over a week apart could be so different, but that's astrology for you. Rams and fish often fail to form a connection, as Aries never beat around the bush and Pisceans avoid conflict like it's their job. Aries also tend to be energizer bunnies who never sit still for a minute, while Pisces spend approximately 95% of their time dreaming and meditating. Sorry, Big Sean and Jhené, but Pisces-Aries relationships are tricky AF.

The rams of the zodiac can be confident and courageous to a fault, while fish tend to be far more deliberate in their behavior. For them, feeling secure is far more important than experiencing thrills. During a Sept. 2019 interview with Byrdie, Aiko spoke about her favorite mantra ("I am protected"), as well as her study and practice of "sound healing." Though she lives her life cautiously, she also accepts that things may not always go according to plan. "The most Pisces thing about me is that [at] any given moment I can be anything," she said, later adding, "I'm a free, go-with-the-flow kind of person."

Unlike most Aries — who would rather cut out their tongue than talk about emotions — moody, mystical Pisceans live in their feels. As a Pisces queen (I mean, she has a poetry book entitled 2Fish, guys), Aiko devotes a lot of her energy to meditation, reflection, and artistic creation. "I make music for healing purposes, for myself," the self-proclaimed "open book" told Essence during a Feb. 2020 interview. "It's like journaling or when people paint. It's sort of an escape. It's turning pain or frustration into something; into art." She even told Byrdie that, after each song, she feels like she's "lost like a piece" of herself, because she put it into her music. That's some Big Pisces Energy right there.

Unlike gentle Pisces, the rams of the zodiac are fierce, feisty, and totally ferocious, which is why they often make for great leaders and ruthless competitors. For Aries, if you're not in first place, then you're in last, and Big Sean is pretty much Aries epitomized. The rapper has faced several setbacks in his life — including being diagnosed with heart disease at 19 and living with depression — but he's been able to persevere. "When I graduated from high school, the teacher said I was throwing my life away following music, and the same teacher invited me back to speak at the school," he explained to Interview in June 2011. "I don't say that to brag. I just want to be an example."

As confident and career-focused as Big Sean may be, he's different than other Aries in that he's willing to open up about his feelings. Around the time Big Sean turned 30, the artist — who's been producing music since he was 11 — realized he needed to slow down. As he explained during a Feb. 2020 appearance on Joe Budden’s Pull Up, "It's hard to think of [your passions] when all your experiences are the same — essentially like, you sit in the studio, you do a show, you do this, do that. I didn't take time to live life between those moments and the balance caught up to me." It's rare for always-on-the-go Aries to allow time for reflection, but it seems Big Sean is ready to make time.

Astrologically speaking, these two artists are far from an ideal match, but it seems as though Aiko's calming Pisces vibes has had some effect on Big Sean's restless Aries energy. As long as an Aries is willing to open up to their Pisces partner, then it's possible for these two to get on the same page. I'm rooting for you two!