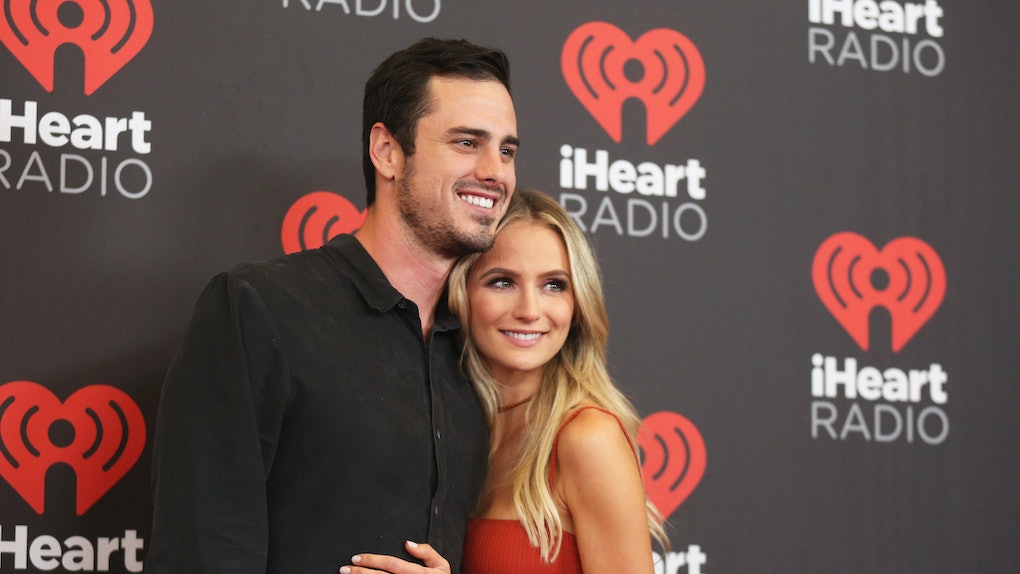 It's never easy to find out that an ex is engaged. It's even harder if you and that ex fell in love on a reality dating show and then publicly called off your engagement just two years before she became engaged to someone else. That's exactly what happened to Bachelor alum Ben Higgins, whose ex-fiancée, Lauren Bushnell, recently announced her engagement to country singer Chris Lane. It should be no surprise that the former Bachelor has a flare for the dramatic, but Ben Higgins' reaction to Lauren Bushnell's engagement still has me pretty shook. It's dramatic, but strangely understandable.

Two days after Bushnell accepted the 3.5-carat, emerald-cut diamond from her country crooner, Higgins opened up on his podcast, The Ben and Ashley I Almost Famous Podcast, giving listeners his thoughts on the news, which — apparently — he's "thrilled" about. He even offered his ex a joint blessing from him and his now-girlfriend, Jessica Clarke. "We’re thrilled for you,” he said. "You found a man that you love without any pressure and in a moment, after dating for a long time, you have said 'yes' to spending your life with him and I could not be more excited for you."

That wasn't all he had to say, however. As to be expected, Higgins' feelings about Bushnell's new life development are pretty complicated. He and Bushnell were engaged for 14 months after he proposed during The Bachelor's season 20 finale, and understandably, their breakup was hard on him. While he seems sincerely happy for her, he also suggested that having her officially promised to someone else will help him put their relationship behind him.

As he explained during his podcast, he hopes that, going forward, his life will not be "as closely tied" to Bushnell's. "I hope that this separates us,” he confessed. “ ... we’re gonna move on and it’s good for all.” Sure, their parting was largely amicable (as Higgins said, he and Bushnell ended their relationship "knowing it was for the best" and hoping the best for each other), but it never really ended until now. As strange as it sounds, Higgins believes that Bushnell's new chapter with Lane will officially "close a chapter" in his and Bushnell's own story.

When a person once meant a lot to you, cutting them out of your life — even after a breakup — is next to impossible. "My life will always be tied at some level to Lauren and Lauren’s to mine," Higgins explained. "That’s just part of it when ... you have a serious relationship at any point in your life. You have a piece of them with you.” But for Higgins, he's ready to finally detach his life from his ex-fiancée's.

If Bushnell's engagement causes a permanent rift between her and Higgins, he thinks it's probably for the best, and after hearing his explanation, I can't help but agree with him. “I hope this is a chapter being closed completely," he said, "because I don’t know Lauren anymore ... " As much as I loved Higgins and Bushnell together, I'm happy to see them both happy, even if it's not with each other.