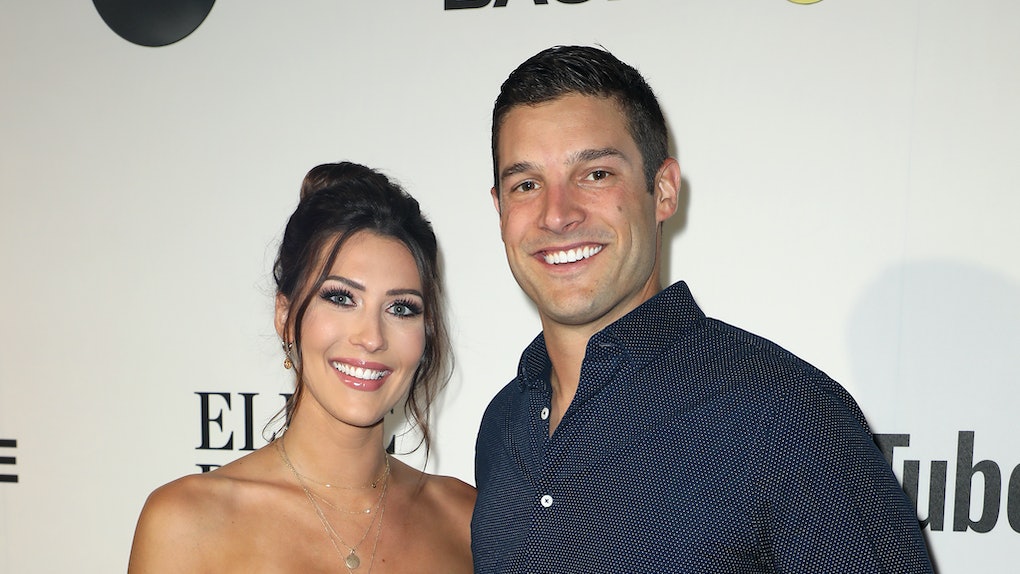 Raise your hand if you've ever felt personally victimized by 2020 🙋. Like so many others, Becca Kufrin has found the first half of the year to be a bit of a struggle, and during the July 7 episode of her Bachelor Happy Hour podcast, the Season 14 Bachelorette opened up about what's made 2020 such a bumpy ride (besides, you know, the whole global pandemic thing). Apparently, Becca Kufrin feels "tested" by the Garrett Yrigoyen breakup rumors, which follow the announcement of her fiancé's controversial stance on the Black Lives Matter movement. (Elite Daily reached out to reps for both Kufrin and Yrigoyen for comment on the breakup rumors but didn't hear back in time for publication.)

While chatting with her co-host Rachel Lindsay, Kufrin said, "It was easy sailing, and now I look back just to a couple of months ago and I feel like I was at a totally different place in my life, like, a completely different mindset. With everything happening, I feel like I'm being tested. I'm learning a lot more about myself and my friends and my family and just having new conversations that I've never had before in my life." Though she didn't specifically mention Yrigoyen, I have a good feeling many of those tough convos have been with him.

"You want to try to put on a brave face, but I think I'm learning that that's not the case," Kufrin later added. "This is not the year to do that and to pretend everything's perfect. So just going through the motions. Thank god I have a great support group and friends and family but I'm learning a lot. 2020, it's been a lot. But I look at it as, I would never want to not do 2020 for as many crazy things that have happened. So that's kind of where I am."

In June, five days after Yrigoyen showed support for police officers in an Instagram post amid protests over police brutality, Kufrin defended her partner on the podcast. "Garrett is my fiancé and I love him, and to his core, I believe that he is a good person," she said. "What he posted … I don't align with and I don't agree with. I don't think he meant it in a malicious way. I do think it was tone deaf and it was the wrong time and message and sentiment. … I'm trying to get him to see the bigger picture."

A week after that, during the June 16 episode of Bachelor Happy Hour, Kufrin sounded less sure about where she and Yrigoyen stood. "For those who are curious about my relationship with Garrett at this point, all I can say right now is that I don't know," Kufrin confessed. "I can't give anything more than that. It's something that we are trying to work through and discuss and do work on at home at this time and that's where the work will remain and that's really the best I can give you at this point." 2020 has certainly put the former Bachelorette to the test, but hopefully, Kufrin can figure out what's best for both her relationship and herself.