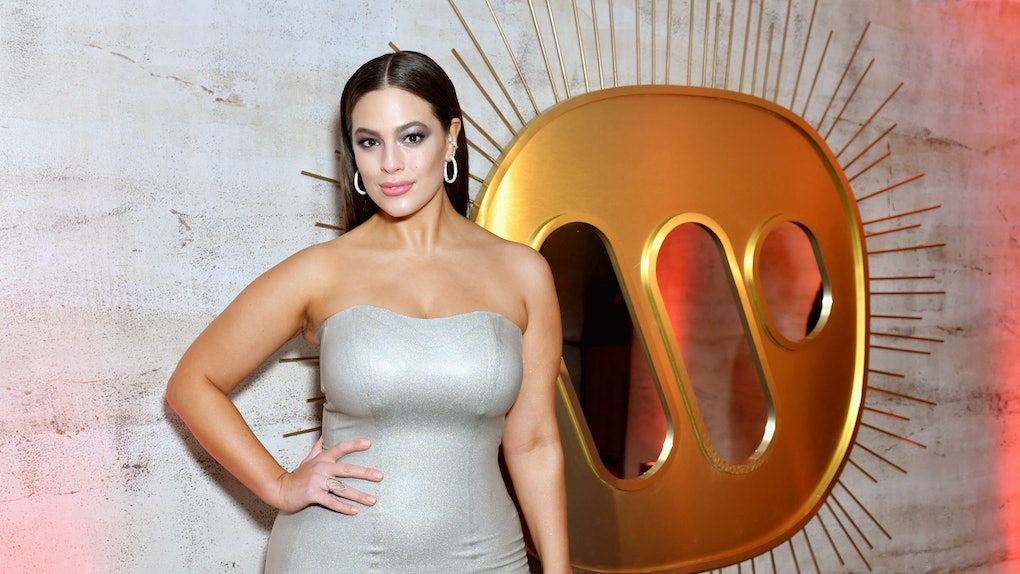 Insta trolls, look out. It seems like an increasing amount of celebs and influencers have decided to no longer put up with your BS, and instead, they're clapping back with the cold hard facts in the comments section on social media. The latest celeb to do so is Ashley Graham, whose response to body-shamers on Instagram is the legit epitome of a perfect clapback. Seriously, this woman does not hold back when it comes to putting jerks right back in their place.

On Wednesday, Aug. 29, the 30-year-old model posted a series of (totally gorgeous, if I do say so myself) photos of herself posing in a set of Dior lingerie. While most of the comments celebrated how incredibly fierce Graham looked, a lone Instagram troll pounced on the opportunity to body-shame the model, writing, "We thought you work out." But Graham didn't miss a beat; she countered the rude remark with the perfect question: "Girls with cellulite and rolls can't work out also?" Yes. Queen.

Personally, I love how Graham's response is so powerfully simple, composed, and to the point. Clearly she wasn't phased in the slightest by someone insinuating that her rolls and cellulite mean she must not actually work out, because the truth is, that's a load of body-shaming BS.

Plus, Graham didn't just put the troll in their place with her response. She also raised the very important point that maybe, just maybe, not everyone works out to lose weight or to look a certain way. Fitness is about feeling your healthiest from the inside out, and exercise is for everyone, regardless of what you look like. Time and again, Graham relays these messages to her fans and social media followers by being incredibly outspoken and fearless when it comes to body-positive advocacy.

Graham's interaction with the troll on Wednesday's post certainly wasn't her first rodeo with body-shamers, either. In an Instagram post from October 2017, the model revealed that just about every single time she posts a workout video, she sees rude comments such as, "You'll never be skinny, so stop trying," or, on the other end of the spectrum, "Why would you want to lose what made you famous?" TBH, my eyes couldn't be rolling further back into my head right now — I think they're going to get stuck this way. HELP.

These comments that Graham regularly sees on her posts are obviously frustrating and disappointing, but it just goes to show that everyone will always have an opinion on these things, even when those opinions are completely unnecessary to express, even when they're contradictory, and even when they're just downright rude. The important thing to remember is that people and comments like this aren't worth a minute of your time, so you might as well just do you and be happy in your own skin — and that's exactly what Graham is doing herself.

"Just for the record — I workout to: stay healthy, feel good, get rid of jet lag, clear my head, show big girls we can move like the rest of em, stay flexible & strong, have more energy," Graham wrote in the October 2017 Instagram post. "I don't workout to loose weight or my curves, bc I love the skin I'm in."

Guys, I'm screaming. This woman is my idol. Thank you, Ashley, for being a positive role model for women everywhere, for constantly reminding us all that working out is great for so many things in life, not just aesthetics, and for showing us that anyone who feels the need to comment on another person's body, can kindly escort themselves out.

More like this
These 40 Clever Vaccine Selfie Instagram Captions Deserve A Shot On Your Feed
By Rachel Chapman
I Tried Singing While Running Like Miley Cyrus & OMG, My Lungs
By Rachel Varina
7 TikTok Recipes Using Ramen To Make Lasagna, Pizza, Smoothies, & More Treats
By Kelly Pau
Stay up to date