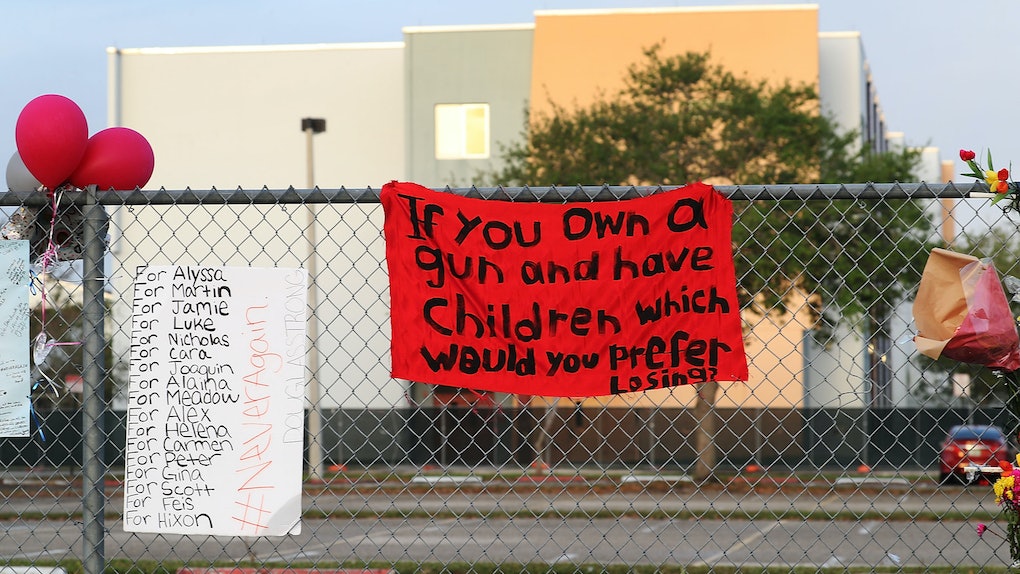 After President Donald Trump proposed the idea of arming teachers with guns to prevent school shootings, educators around the country have been putting in their two cents. In what's become a social media movement, #ArmMeWith tweets show teachers' thoughts about guns in the classroom. The hashtag has inspired countless posts about gun violence.

The hashtag was started by Olivia Bertels and Brittany Wheaton, English teachers in Kansas and Utah, respectively, according to CNN. I spoke with Bertels and Wheaton about their movement, which took off on Tuesday, Feb. 20 in response to Trump's proposal.

"I knew we would make a small statement, but I had no idea it would take off like this," Wheaton tells me over email. "However, I am so glad it did. When we launched the #ArmMeWith movement, we had one goal in mind: for teachers to have their voices heard and to present logical solutions to the horrific events that have been occurring in our schools."

After a former student shot and killed 17 students and teachers at Marjory Stoneman Douglas High School in Parkland, Florida on Feb. 14, the idea was proposed during a White House listening session with survivors and community members earlier this week.

In tweets later on, Trump denied that he suggested this, though he confirmed that he was still entertaining the idea of arming teachers in some capacity. "I never said 'give teachers guns' like was stated on Fake News @CNN & @NBC," Trump wrote in a Tweet from Feb. 22. "What I said was to look at the possibility of giving 'concealed guns to gun adept teachers with military or special training experience — only the best.'"

The New York Times reports that Trump on Thursday reiterated his stance on arming teachers, mentioning government funding to provide them with firearm training, as well as bonuses to those who have it. The proposal was reportedly backed by the NRA.

But teachers, inspired by the #ArmMeWith movement, are making clear what they'd prefer to be armed with rather than firearms.

"Teachers, now (more than ever) is the time to take and stand and say we will not accept another one of our students being lost to another senseless school shooting," wrote Wheaton, who goes by the handle Superhero Teacher on Instagram, in a post on Feb. 21. "We have to strive for MORE. Our students deserve it."

You can see some of the #ArmMeWith tweets here.

Since the tragedy, the nation has taken up the controversial topic of how to address gun violence.

Wheaton see steps that can be taken to prevent mass shootings in schools. "I think providing teachers with the resources and funding needed to help students experiencing mental health issues is an excellent start," she says, explaining her stance on gun control. "We need universal background checks, we need waiting periods, we need to increase the age to purchase, we need to close the gun show loophole, and we need controls on the large capacity ammunition. We keep students safe by keeping firearms out of the hands of dangerous individuals."

The national conversation has be tense, to say the least. In the last several days, talks have focused specifically on gun control and how to prevent shootings.

On Tuesday, Feb. 20, Trump recommended banning bump stocks, which convert semi-automatic weapons into fully automatic ones. The next day, he met with Stoneman Douglas students and community members in the White House listening session on gun violence in schools. CNN hosted a town hall with survivors, also on Wednesday, but Trump didn't attend. Senator Marco Rubio (R-FL) and representatives from the National Rifle Association (NRA) did, however, and the exchanges became heated.

Meanwhile, numerous demonstrations are being planned to protest gun violence in schools, and students are behind all of them. Chronologically, nationwide demonstrations will begin with the Enough! Walkout on March 14 (I spoke with organizers about this), followed by the March For Our Lives on March 24 and the National School Walkout on April 20.

Now, the #ArmMeWith movement has given voice to teachers to offer solutions to the problem.

It appears that the two English teachers have achieved their goal; Wheaton says they've gotten responses from over 7,000 teachers proposing solutions.

"The response has been overwhelmingly positive," Bertels says in an email for Elite Daily. "Any negativity has been largely from those who, we notice, are not generally classroom teachers."

Growing up in a state with many gun owners, Bertels says that gun control wasn't on her radar until the wave of mass shootings in the last decade, and she began to educate herself about common sense gun laws.

"Many people here are responsible gun owners, and I respect that," she says. But the Parkland shooting was the straw that broke the camel's back. "I have a friend who works at Marjory Stoneman Douglas, so that is where I've found renewed energy to pursue the #ArmMeWith movement alongside Brittany," she says.

And beyond solutions, the movement appears to be having a larger impact on the community.

"Teachers are taking over Instagram with #armmewith and I'm crying, I love it," wrote one user on Twitter. Actor and teacher Nicholas A. Ferroni used the hashtag to comment on what it means to be a teacher in general: "Teacher: a person who often refers to other people's kids as 'my kids,' because they care about them as if they are their kids."

I asked both Wheaton and Bertels what they'd say to the president on this issue if given the chance. Their responses were similar: Listen to what educators are saying.

"It is evident through this movement that we do not feel comfortable being armed in the classroom — arming teachers is NOT the solution," Wheaton says. "Instead, arm me with the resources and funding needed to help students experiencing mental health issues. Arm me with stronger background checks. Arm me with change."