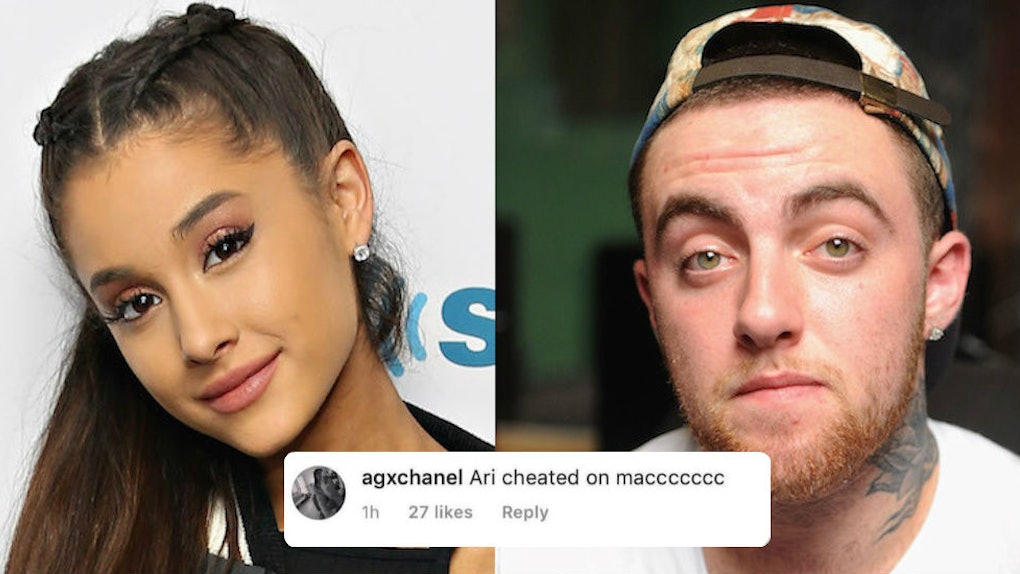 Ariana Grande and Pete Davidson's engagement happened so fast, it caused a lot of people online to come up with their own theories about what happened behind the scenes of Grande's breakup with Mac Miller and Davidson's breakup with Cazzie David. So far, those theories have gone unaddressed by the engaged couple, but the singer finally had enough with the theories and addressed them on Instagram. Ariana Grande's response to accusations she cheated on Mac Miller was blunt and simple: she didn't.

A fan on Instagram posted a presumptive comment and Grande clapped back at it hardcore, showing she's had quite enough of all the negative comments from people. The user commented, "Ari cheated on maccccccc."

If you've been living under a rock with no wifi, here's the abridged history of Grande's love life: Grande and Mac dated for two years before reportedly breaking up sometime in May. She started dating Davidson just a few weeks later and was engaged to him by June. The quick timeline left a bad taste in some fans' mouths, but that doesn't mean there was cheating involved.

Grande responded to the hater saying, "i didn't but go off. can u like .... go stan someone else? ur boring." Woof. The user's other comment said, "Pete Davidson will be the song I skip all the time," to which Grande snapped back, "awwwww boo f*cking hoo Alexa play Pete Davidson." LOL. Ari ain't got time for that.

"Pete Davidson" was a song formerly named just "Pete" on the Sweetener album, coming out Aug. 17. Grande changed the song's title to her fiancé's full name for a romantic reason. When asked by fans what inspired the title change, she tweeted back,

I like the way it looks. I love his name and i love him. music lasts forever. it’ll outlive any tattoo, any memory, any anything, even myself so i want my love for him and how i feel to be a part of that.

Basically, don't come for Ari when it comes to Pete Davidson.

In another Instagram comment, Grande expanded more on why she gladly alienated the negative fan. She said, "jus done w the mean ones u kno? we're supposed to be the most loving and funny and dope fan base around. i do not accept this energy anymore. there's no room for it. it won't be tolerate[d]. or noticed anymore tbh."

Another Ari stan tweeted a screenshot of the exchange and said, "love how she calls us the most loving and funny and dope base around. i adore her."

Grande responded to the fan's tweet saying, "u really are. the sickest." Got that, Ari stans? The light is coming! No more negative energy.

Fans spewed even more negative energy when Nicki Minaj pushed back the release of Queen to the same day as the release of Sweetener. Fans were essentially pitting the two women against each other saying that neither will be as successful as they could be on streaming services now that the albums are dropping the same day.

Grande addressed all of these comments basically saying it ain't that deep. One apparently very stressed out Ari stan tweeted, "arianators, please shut the f*ck up. its enough that nicki pushed it. i don’t need y’all pitting her and nicki against each other now. i don’t. nicki’s push has nothing to do w her 'not being ariana’s friend' just shut the f*ck up. jesus."

jesus is this what’s going on today? imma jus stop logging in at all lmfao. that’s my f*cking sister. she’s clearing a sample. buy and stream queen & sweetener aug 17 bye. these numbers don’t mean as much to the artist as they do to y’all. jus want y’all to listen to the project.

If there's one lesson to learn from Grande's Sweetener era, it's that she's not going to tolerate any negative conspiracy theories from people, even if those people have been devoted fans. And quite frankly, she doesn't have to.