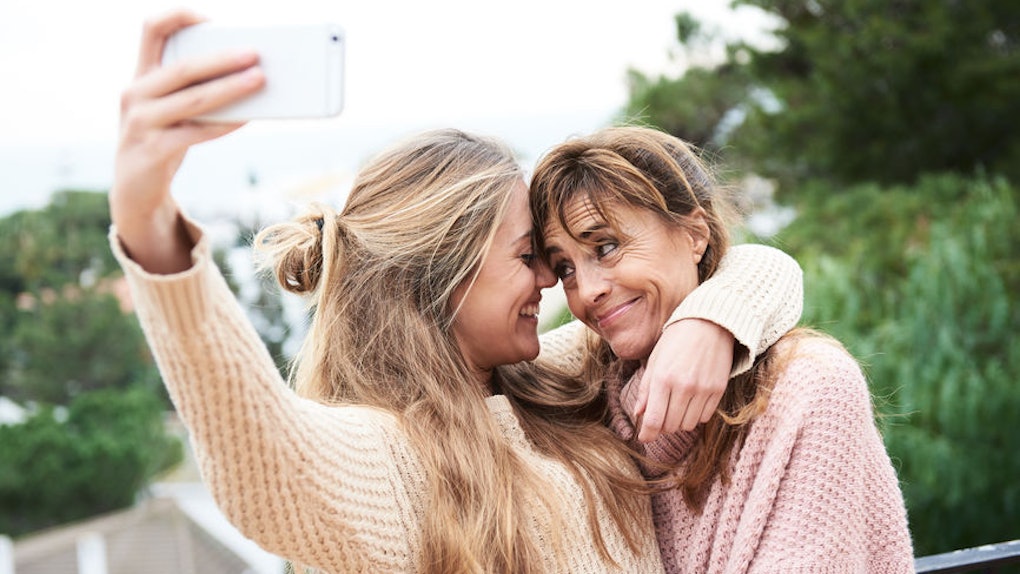 Are Millennials Close To Their Parents? Science Says You Love Them More Than You Realize

The dynamic between you and your parents gradually changes as you get older, and it’s admittedly a little sad when you realize how natural a progression it is. Think about it: Can you remember the last time you kissed your dad good night, or asked your mom to braid your hair? One minute, you’re 5 years old and your parents are your entire world, and the next, you’re passing on movie night with the parentals to hit happy hour with your squad. But according to new research from UCLA, millennials are close to their parents, despite what their social calendars may reflect. So go ahead and shoot a text over to your mom and dad today, friends — and not because you have to, but because you know you secretly want to.

Having grown up with three siblings, each of whom are at least eight years older than me, I spent a lot of one-on-one time with my parents and still, to this day, I consider them to be two of my best friends. But, being 26 years old, married, and living in an entirely different part of the state as them now, our relationship has changed. I didn’t consciously realize it, though, until my husband pointed it out: He asked if I could remember the last time my mom brushed my hair and I could not, for the life of me, picture that happening for the final time. It was like an itch I couldn’t scratch — but instead of making me feel annoyed, I felt sad.

Unless you’ve somehow inherited the Peter Pan gene, you and I were destined to grow up and create lives outside of our childhood homes. But that doesn’t necessarily mean you have to trade in your parents for your peers. It just means the time you spend with your fam evolves; it becomes something you actively plan for and cherish in a way that you never did in the past. And sure, maybe in between juggling work, school, and play, you really haven’t been paying enough attention to your parents lately. It happens, and that's life, but according to a new study, it by no means translates to you not caring about the people who raised you.

The study, published in the scientific journal Psychological Science and led by UCLA assistant professor of psychology, Jennifer Silvers, is the first of its kind, according to ScienceDaily, to explore whether or not college students are close to their parents. To do this, Silvers and her team rounded up 174 people between the ages of 18 and 30 to play a series of games in which they’d earn points toward helping a friend or parent of their choosing. Before the games began, participants were asked to complete a 28-question survey about the parent or friend they were playing for. On paper, participants seemingly felt stronger about their friends than their family members, but the actual competitions showed something entirely different.

The experiment was carried out like a card game: Each of the 16 cards in play yielded a certain amount of points, cash value, or represented a loss. The cards were presented face-down to participants, who were allowed to turn over as many cards as they wanted until they either lost or decided to cash out. ScienceDaily reports the game lasted for all of 48 rounds, and the results showed that “when they knew they were playing the card game to benefit their parents, the participants were more than 25 percent more likely to turn over additional cards.” In other words, millennials might love their squad, but when it comes down to it, family (especially parents) still comes first.

It's worth mentioning, though, that there was some slight hesitation from participants when it came to choosing between the two — which makes sense, right? As you grow up, your loyalties can kind of split between the family that raised you, and the family you built for yourself outside of blood relatives. Still, study author and one of Silvers' doctoral students, Joao Guassi Moreira, said parents won out the majority of the time: "Several [participants] said slight variations of, 'Even though it was hard to not pay as much attention to my friend, I felt like I owed it to my parent, who has helped me so much,'" Moreira explained in a statement. It just goes to show family does, indeed, matter.

Is this hitting you in all the feels? Are you reaching for your phone as you're reading this, opening a message to good ol' mom and dad to make plans this weekend? Same, girl. Trust me, I understand life gets busy quickly, and sometimes an entire week will go by before I pick up the phone to hear my parents' actual voices instead of just shooting them a text. But scheduling some much-needed bonding time in between your responsibilities at the office and cramming for an upcoming exam is possible; it just takes a little planning and effort on both your parts.

For example, maybe you can find a time to call one another and catch up every week that fits nicely into all of your schedules. If you don't live particularly close, vow to make and keep dinner plans once a month. But that quality time together doesn't have to be so basic; you could go to a football game with Dad in October and schedule a spa day with Mom in November. Much more fun than dinner at Red Lobster for the umpteenth time, right?

Unfortunately, spending time with your parents is never going to feel the same as it did when you were a kid, but the beauty in that is it's not supposed to. The older you get, the more mature your relationship becomes, and that's special in its own right.