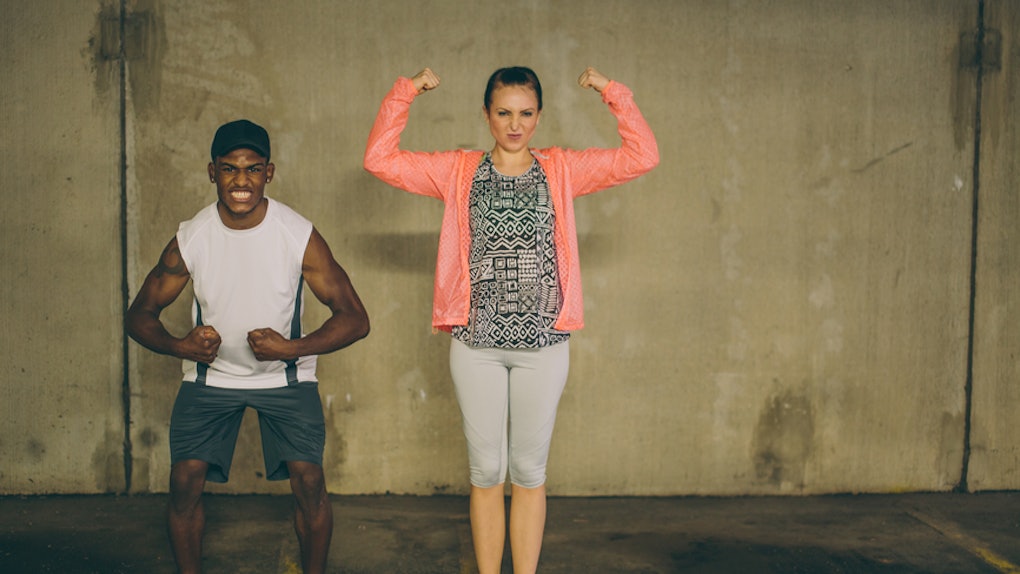 I was running on a treadmill at the gym when I sensed a presence next to me. To my left, stood a strange man who gestured me to take off my headphones. Before I could even try to guess what he wanted, without missing a beat, he told me my form was off. Then he got on the treadmill next to me to show me how to run correctly. While there are many inappropriate behaviors at play here, this man's confidence might have, in part, been owed to the common conceptions that men's bodies are stronger than women's bodies, that male bodies are better built for exercise, and as a result, they're more competent athletes.

Well, mansplainers at the gym, y'all can suck it, because a recent study shows that young, healthy females might be better athletes than young, healthy males, and that female bodies might actually be better built for aerobic exercise than male bodies. Feeling mind-blown yet, my dudes?

The study, published in the journal Applied Physiology, Nutrition, and Metabolism, sought to reveal which gender was more athletic overall, and able to process oxygen faster during aerobic exercise. The research, which was carried out at the University of Waterloo in Ontario, Canada, showed that young female athletes are able to process oxygen faster than men, and that their bodies seem to more quickly absorb that oxygen into the bloodstream (this is called oxygen uptake). A quicker rate of oxygen uptake eases strain on cells, which is one way aerobic fitness is calculated.

Now, it's worth noting that only nine men and nine women, all of whom were in their mid-20s, participated in the study, so yes, it's a super small sample size, which definitely factors into how much we can generalize these results o the masses.

As for how the study was conducted, participants were asked to walk on a treadmill while researchers compared their oxygen consumption and extraction while they moved.

They found that women processed that precious, precious air 30 percent faster, and they were more efficient at doing so than men across the board.

Thomas Beltrame, a lead author on the study, elaborated on the findings,

While we don’t know why women have faster oxygen uptake, this study shakes up conventional wisdom. It could change the way we approach assessment and athletic training down the road.

The findings are contrary to the popular assumption that men’s bodies are more naturally athletic.

As for how this factors into women's performance in aerobic exercise, Richard Hughson, a professor in the Faculty of Applied Health Sciences at the University of Waterloo, explained,

We found that women’s muscles extract oxygen from the blood faster, which, scientifically speaking, indicates a superior aerobic system.

And in case you were wondering, the use of oxygen during exercise is one of the most important and beneficial parts of getting that heart rate pumping. It promotes lung health, removes carbon dioxide, and gets oxygen to the muscles. So a woman's ability to put it to good use faster than a man also means that women are less likely to experience muscular fatigue or feel over-exerted after a hard workout. Yaaas, girl power for the freaking win, guys.

Interestingly enough, previous research argued that men were the ones who had a faster oxygen uptake at the onset of exercise routines — but there's a catch to that.

This characteristic had previously not been studied in groups of young people of similar athletic ability, whereas the University of Waterloo's study did factor these details into the equation.

Yes, the current study was small, but it was telling nevertheless, and in relation to the size and capabilities of our bodies, it simply might mean that women are just more naturally built for exercise than men.

Plus, and perhaps most importantly, once and for all, this research proves that I'm definitely good without all those unsolicited "pro tips" at the gym from mansplaining gym bros. Unless, of course, one of them is alerting me to the fact that my shoes are untied or something.

More like this
I Tried Singing While Running Like Miley Cyrus & OMG, My Lungs
By Rachel Varina
These 40 Clever Vaccine Selfie Instagram Captions Deserve A Shot On Your Feed
By Rachel Chapman
15 'Schitt's Creek'-Inspired Mother's Day Cards On Etsy For The Moira In Your Life
By Rachel Chapman
Stay up to date