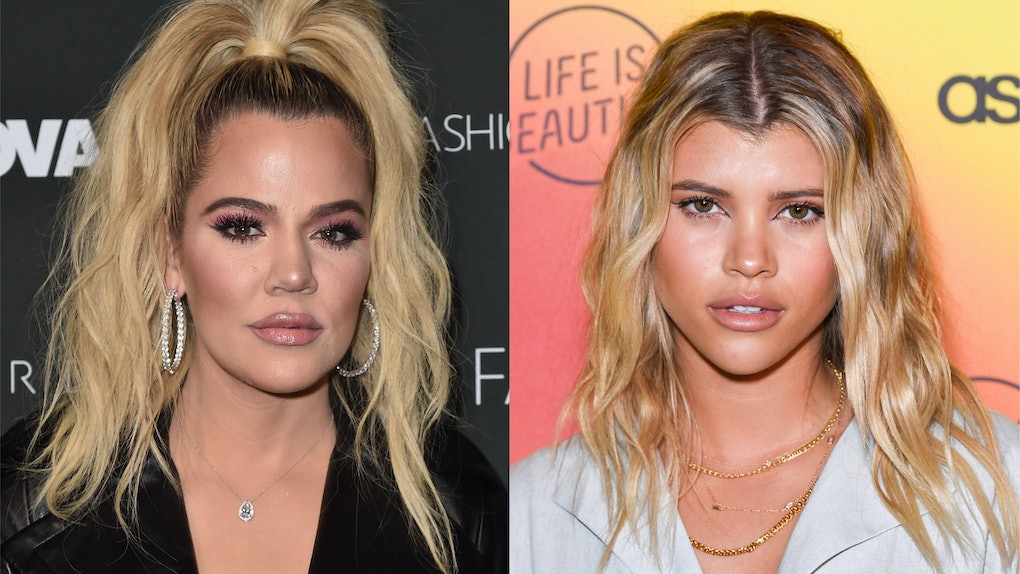 Are Khloé Kardashian & Sofia Richie Friends? All Signs Point To Them Being Pretty Close

In May 2017, Scott Disick and Sofia Richie raised eyebrows when they were first pictured getting "friendly" with each other in Cannes. Disick and Kourtney Kardashian had long called it quits, but what made Disick and Richie's relationship so controversial to the public was that back then, Richie was only 18 years old. With Disick being twice Richie's age, many people felt it was inappropriate for the two to be romantically involved. Well, it's been two years since then, and Disick and Richie are still going strong. Since Disick is the father of Penelope, Reign, and Mason Disick, the Kardashian-Jenner family won't ever be without Disick and any of his girlfriends, either, which brings us to the question, are Khloé Kardashian and Sofia Richie friends?

As it turns out, it seems that Khloé and Richie may actually be friends. *Gasp!* Yes, it seems that it's actually possible to be friends with your sister's ex's girlfriend (wow, that's a mouthful). I give the whole Kardashian-Jenner family props for not being awkward about it at all. Instead, they've seemingly handled the whole situation maturely and have even included Sofia Richie in family outings, like their birthday parties.

For example, Khloé Kardashian turned 35 on June 27, and to celebrate, she had a big birthday bash with all her sisters, as well as Richie, in attendance. In case y'all don't believe me, Kylie Jenner, who is apparently best friends with Sofia Richie, documented the whole party on her Instagram Story, and you can see Sofia Richie in one of her posts. Take a look below.

No, your eyes aren't deceiving you. That's really Sofia Richie at Khloé Kardashian's birthday party on June 26. Richie's attendance at Koko's party had to mean that, at the very least, Khloé and Richie are on good terms, right?

Alright, Sofia Richie could have totally gone to Khloé Kardashian's party just to be polite, but hear me out, because I really do think they're friends.

On Aug. 8, Kylie Jenner posted a "Drunk Get Ready With Me" video with Khloé, and in the video, the sisters Facetime Sofia Richie. Richie teased Khloé's half-done makeup and says she looked "so f*cking crazy." It's wasn't like an ugh-you're-so-f*cking-crazy-I-don't-like-you comment, but more of an "I love you. You're so f*cking crazy," if that makes sense. Hear it for yourself below (it happens around the 4:10 mark).

Richie then joined the sisters at the end of the video and she looked like she was really enjoying herself. It wasn't awkward at all. In fact, it was the opposite. Richie and Khloé seemed so comfortable around each other. Khloé even gushed about how "naturally pretty" Richie is and how she doesn't need makeup.

Now, does that sound like two people who hate each other? Nope. It seems to me that Khloé and Richie are good friends and really enjoy each other's company. So props to them for being so mature and not letting anything get in the way of their friendship!