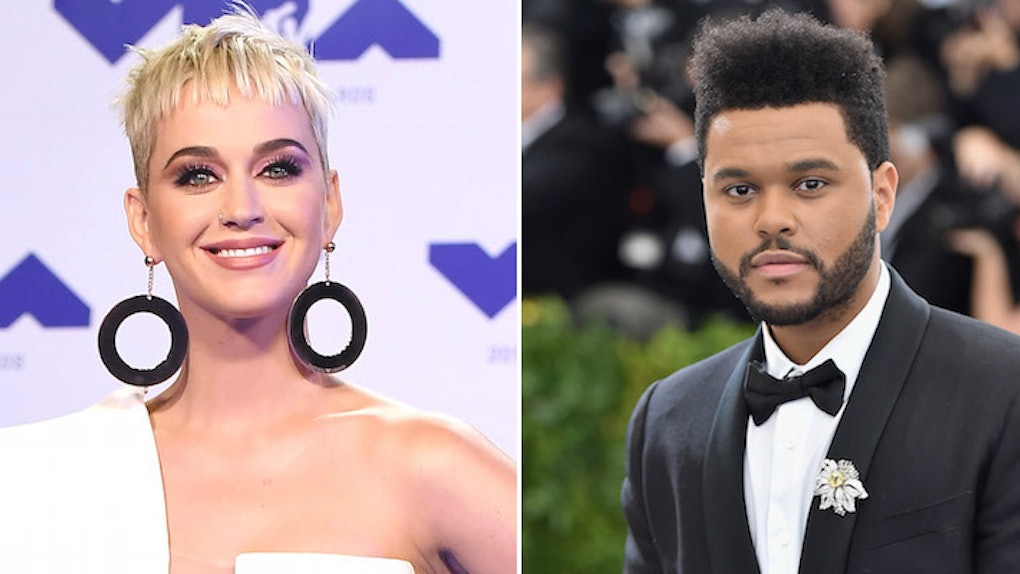 As if we weren't already confused as hell about Selena Gomez and The Weeknd's dating lives post-breakup, The Weeknd and Katy Perry reportedly went on a date, and I'm just done with everything. Are Katy Perry and The Weeknd dating?! I can't keep up with these celebrity relationships anymore, guys. I quit. This is over, it's canceled. Cut, print, moving on. The two singers were reportedly seen getting dinner together in Hollywood on Monday, Nov. 20. According to eyewitnesses, Perry arrived to the restaurant 15 minutes after The Weeknd, they had dinner, enjoyed each other's company, and then left separately at the end of the night. I'm going to go ahead and label this under "things I never thought would happen but hey, it's 2017, so I guess this is right on brand."

This is coming right after rumors that The Weeknd and Bella Hadid got back together following his breakup with Selena Gomez, and right after we learned Selena Gomez and Justin Bieber are back together. Safe to say we're in a really confusing era, fam. It's possible Perry and The Weeknd were just hanging out platonically, but it really, really seems like these two went on a date. Meanwhile, Bella Hadid is in Shanghai, China for the 2017 Victoria's Secret Fashion Show.

On Nov. 14, The Weeknd was seen leaving Bella Hadid's New York City apartment in a rush, likely hoping to avoid being seen. According to reports, The Weeknd spent a couple of hours at Hadid's apartment before leaving. This made fans believe they might be getting back together, but maybe they aren't considering The Weeknd and Katy Perry's reported date. Selena Gomez and Justin Bieber, on the other hand, are reportedly already exclusive and are spending a lot of time together. The Weeknd's famous exes have been doing their own things lately.

Gomez recently performed at the American Music Awards where Justin Bieber and The Weeknd were up for a bunch of nominations. The two men, however, did not attend the show.

Bella Hadid had a nip slip during the Victoria's Secret Fashion Show on Monday, Nov. 20 in Shanghai, but she handled it like a pro and didn't let it stop her from slaying the runway.

Fans have some pretty mixed reactions to Katy Perry and The Weeknd going on a date.

But other fans think this wasn't a date at all, and it's actually two artists meeting up to talk a potential music collaboration.

People were a lot more excited for The Weeknd and Bella Hadid to get back together than they are for a potential relationship with Katy Perry.

They're also pretty pleased Selena Gomez and Justin Bieber are back together, as well.

One thing's for damn sure, people were not expecting this whole Katy Perry and The Weeknd thing. Let's just hope this is about the music, guys.