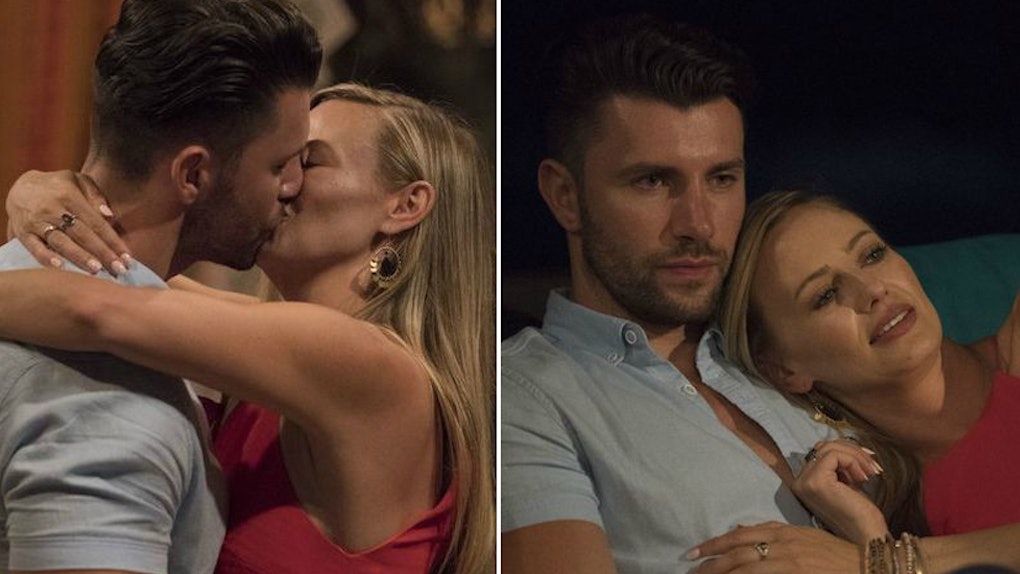 Annaliese and Kamil's Body Language On 'Bachelor In Paradise' Is Inconsistent, An Expert Says

Ah, Bachelor In Paradise. It's the only show currently on television that's actually worth watching, in my humble opinion. But really, this show has it all: beautiful people, tequila, the beach, and bad decisions. It's great, and this season has given viewers a few different couples to root for, with some actually surprising fans at how serious they seem to be about each other. (Yes, I'm looking at you Jenna and Jordan.) But after Monday night's Fantasy Suite-filled episode, Annaliese and Kamil's body language on Bachelor In Paradise shows a lot of uncertainty.

If you haven't been obsessively keeping up with the couple on Bachelor In Paradise like I have, then allow me to fill you in. Basically, Annaliese has been looking for her one true love since day one of this season, and while she's certainly tried with a few men, it wasn't until Kamil arrived in paradise that she really dove in head first.

And while Annaliese has insisted time after time that she and Kamil are each other's end game, Kamil hasn't sounded nearly as certain about the future of their relationship. That's why I reached out to body language expert Blanca Cobb to get the lowdown on what's happening between these two.

By the time Kamil arrived in Paradise, Annaliese had been pretty unlucky in love. But from the moment he walked down those steps, Annaliese was smitten. During their time together, it certainly looked like Kamil was into her! And according to Cobb, their connection was just what you'd expect.

"Annaliese and Kamil are having fun, laughing and enjoying each other’s company," she explains. "Exactly what you’d expect with a couple in love. Annaliese is snuggled right beside him. And he’s got his arm around her."

I mean, I don't really have anything to say about this photo, other than the fact that it's a meme waiting to happen. According to Cobb, though, it's a surefire sign that the two have chemistry galore.

"Whoa — this photo is hot!" Cobb exclaims. "What a way to let your man know that you’re hot for him! Annaliese laying on top of Kamil is much too intimate. You can tell that Kamil is enjoying the attention. You can tell that he’s relaxed because his arms are hanging over the side of the lounger. Look at his fingers, when you see the natural curvature of his fingers. You tend to hold tension in your hands and fingers when you’re uncomfortable."

3. This kiss seemed a little off.

Now, on the outside looking in, it might seem odd that Annaliese was so convinced that she and Kamil would be together forever. But when you consider how quickly things change in paradise, and how many other couples who seemed rock-solid actually fell apart, it's no wonder Annaliese has been trying to remain optimistic.

"This kiss lacks a bit of intensity," she says. "Annaliese keeps her hands on thigh instead of reaching out to touch Kamil. However, their bodies are facing each other, which is a great sign." At least they seem in-tune with each other!

4. But, they certainly seem connected.

Now, if you watch Bachelor In Paradise, then you're aware that Annaliese has seemed a little more into Kamil than vice versa. However, Cobb insists that even though he doesn't always say it or show it as strongly as Annaliese does, Kamil might be feeling the feels, after all.

"Leaning up against Kamil shows a level of comfort and intimacy of a loving couple. Even though they’re looking in different directions and not talking, having their hands on each other is a sign of enjoyment." Not too shabby, huh?

5. In the end, though, their love might have faded.

During last week's rose ceremony, it certainly looks like Annaliese is still feeling it. But Cobb describes this as a "lack-luster kiss."

"Notice that Kamil isn’t quite into it," she says. "His arm is hanging by his side instead of reaching out to touch Annaliese. Not what you’d expect at a rose ceremony. She’s definitely feeling some kind of way with her arms wrapped around him and pulling him close."

It's too early to write them off entirely. On last night's episode, they decided to go to the Fantasy Suite together, where Kamil lovingly told Annaliese that she wasn't the type of girl he wanted to be with, but rather, "you are the girl." If you're not swooning, I don't know what to tell you! It's also worth mentioning that Kamil repeatedly rejected Shushanna, another Paradise contestant, because of his connection with Annaliese. Their body language might not be totally consistent according to Cobb's analysis, but only time (and tonight's season finale) will tell if these two can make it work off-camera.