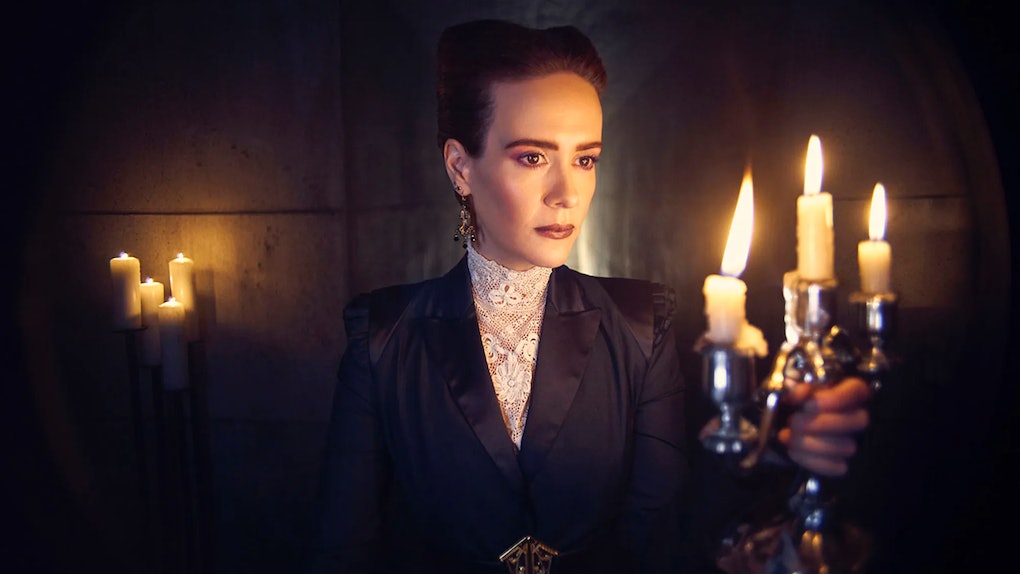 It's been a decade since fans were first introduced to Ryan Murphy and Brad Falchuk's "murder house" in Season 1 of American Horror Story. From ghosts to killers to an iconic rubber bodysuit, viewers were both shocked and delighted by the Glee creators' dark series. In the years since, viewers have been enchanted and horrified to see what the duo comes up with each new season. While there are still a lot of mysteries surrounding the next installment, here's everything to know about American Horror Story Season 10 — including the title, trailer, and release date news — to get you ready for some new frights in 2021.

For many, autumn isn't complete without a new season of AHS. And while seeing what new horror the creators whipped up is thrilling, half the fun of the show is the anticipation. In the years since AHS fans were introduced to the series, they've experienced a wide array of horror, much of which is loosely based on real events and American folklore. Viewers have fallen victim to an old asylum, a creepy killer clown, and a hotel that seems to murder its own guests — and that's just the start.

While you might have thought you've seen it all, Murphy always seems to have another scary story up his sleeve. The frustration (or excitement) for fans, however, is his infamous tendency to keep the seasons' themes and details well under wraps. Ahead of each season, he releases a few clues for fans to devour and dissect. This is what fans are working with so far:

Murphy revealed the AHS Season 10 title on his Twitter on Friday, March 19, posting a short video. In the clip, the series' Season 10 title is quickly unveiled as AHS: Double Feature. The teaser continued to give a bit more context saying the show will feature "two horrifying stories [in] one season" with "one by the sea" and "one by the sand."

In February 2020, Murphy announced the Season 10 cast via an Instagram post and it's full of series veterans. Sarah Paulson, Evan Peters, Lily Rabe, Billie Lourd, Leslie Grossman, Kathy Bates, Angelica Ross, Finn Wittrock, and Adina Porter are all returning, and one very interesting newcomer has been added to the cast: Macaulay Culkin, who was mostly retired, is joining as a Season 10 regular.

On March 23, Murphy released another casting announcement on Instagram, noting model Kaia Gerber will also be in Season 10.

There's no full Season 10 trailer as of March 2021, but considering filming began in December 2020, there's a chance fans will get to catch a glimpse soon. According to Murphy, the theme was "weather dependent" and required warm weather and some summer-specific shots. The Double Feature reveal about the sea and sand confirmed the beach will be a major part of the season.

No specific plot details have been released, but that's not exactly a surprise since each season's story is usually kept top-secret until they're released. Still, Murphy has started dishing out some clues. Back in February 2020, he released a grayscale video of a beach showcasing the upcoming cast list. As the names were displayed over the footage, Orville Peck's moody song "Dead of Night" played. Then in May 2020, he released another beach photo (this time sunny) with a knocked-down fence and a caption reading, "American Horror Story. Clue."

While a water theme seems pretty apparent for Double Feature, Murphy has also been hinting at something involving teeth. In August 2020, he released a photo of a very pointy set of humanoid teeth, and in November 2020 he released an AHS poster with a similar mouth and a geotag of Provincetown, Massachusetts. Many fans are theorizing the Season 10 theme involves sirens or sharks, since Provincetown is known for great white shark sightings, and the 1795 film Jaws was filmed just a few hours away in Cape Cod.

In March 2021, Murphy released another clue, seemingly confirming at least the setting of the season. The AHS creator posted a photo of series veteran Leslie Grossman walking along a beach with newcomer Macaulay Culkin. The pair is dressed in coats and the geotag once again reads Provincetown, Massachusetts. Murphy's caption simply says: "Something wicked this way comes."

As of March 20, no release date has been announced, but considering the series' history of fall releases, a September 2021 premiere is likely. That said, Murphy is known for doing the unexpected. Fans should stay on their toes and possibly out of the water until more details wash ashore.

This article was originally published on March 10, 2021