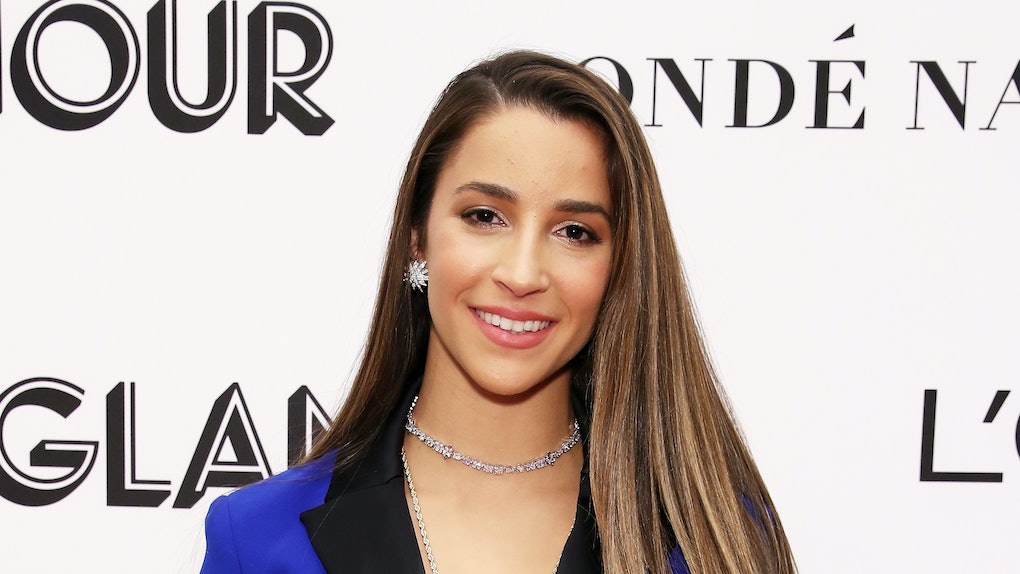 It would be hard to deny that gymnast Aly Raisman is a strong woman. The gymnastics superstar, 24, earned her fame as the captain of Team USA, leading the American gymnasts to victory at not one but two Olympic games in 2012 and 2016. But in 2017 and 2018, she made headlines again — this time, for her outspokenness and powerful statements in the abuse case against former USA Gymnastics doctor Larry Nassar. However you want to define strength, she's got it. But with 2019 in full motion, she's focusing on being strong in a new way, and putting herself first.

"In the last few months I’m realizing that being strong doesn’t always mean that I am fighting 24/7," she says in an interview with Elite Daily. Right now, she's focusing on being strong enough to put herself first. "Strength is also about having the courage to say, ‘I’m really tired today, and I really need a break.’"

In 2017, Raisman made headlines for speaking out as one the survivors of sexual abuse by Nassar, who in January 2018 was sentenced to 40 to 175 years in prison on charges of sexual assault, plus an additional 60 years on charges of child pornography. Nassar was accused of abusing more than 140 women and girls using his authority as a doctor. In the midst of it, Raisman emerged as a prominent voice in holding the former doctor accountable for his abuse, speaking at his sentencing with a powerful impact statement that quickly went viral.

In the months following, Raisman became a prominent figure within the #MeToo movement against sexual harassment and abuse, advocating for change, calling out the culture of silence around abuse, and even launching an initiative, Flip The Switch, to raise awareness of sexual abuse in sports. With everything she's accomplished in the past year, she says she's now focusing on appreciating what she's done and allowing herself to take in the praise she's received. "I want to keep fighting for women’s rights and to protect children from going through what I and so many others have gone through," she says. But being strong doesn't mean forcing herself through things. "There are some days that I don’t want to talk about sexual abuse and what happened to me," she points out. "I’ve learned that’s OK to say, ‘You know what, I don’t want to talk about it today.’"

Raisman thinks that it's too easy to feel like putting yourself first is selfish, or something to feel guilty about, particularly for women. "We don’t want to seem difficult, we don’t want to seem like we’re being spoiled or complaining because people will always say something no matter what you do," she says. She's taken to meditation, spending time with her family, and writing in a journal as ways to take care of herself, and advocates the importance of taking five minutes — or more — for yourself, every day. "I put a lot of pressure on myself to speak on behalf of not only the gymnastics world but also other people who don’t feel like they’re being heard," she says. "So those moments, those quiet moments are when I feel most proud."

Quiet moments, though, don't mean that she's been inactive. Raisman has been a public face for advocacy, including as one of the Fearless Women taking part in Olay's "Face Anything" campaign, which tackles the idea that women are "too" much. Fittingly enough, the words associated with Raisman are "Too Strong" — with the "too" crossed out. "I think a lot of women can relate to being told that you’re too something, you might be too loud or you’re too quiet, or you’re speaking up too much," she tells me. "Whatever it is. It’s just not right."

In fact, she was with Olay at the 2019 Super Bowl as part of their Fearless squad, to both cheer on the New England Patriots and watch Olay's first-ever Super Bowl ad starring Sarah Michelle Gellar. Fittingly enough, part of the point of the ad was to put a little female strength in the middle of the male-centric Super Bowl. "I think that it’s really incredible to see brands taking a stance," Raisman says, "encouraging women to be fearless and encouraging women to face anything."

"When I was younger, when I would go to school, I would get made fun of for being too muscular, too strong," she reflects. "I never liked my body, I felt like I wasn’t feminine enough. And then, as I’m getting older and I’m speaking out... I think that there are always those people." She connects the people who didn't understand her strength then with those who didn't get it when she chose to keep speaking out about her abuse. Not everyone, she says, is going to understand you. But that doesn't mean you should be afraid to make them listen.

"We live in a world where not everyone understands sexual assault," she advises. "Even though it’s so hard when somebody doesn’t believe you and it feels like you’re being abused all over again, I would encourage [others] to not stop until they find somebody that will support them."

And if all else fails? That supportive somebody will be her. "If you are someone out there that’s going through a hard time, just know that I support you," she adds. "And you’re not going to feel like this forever."