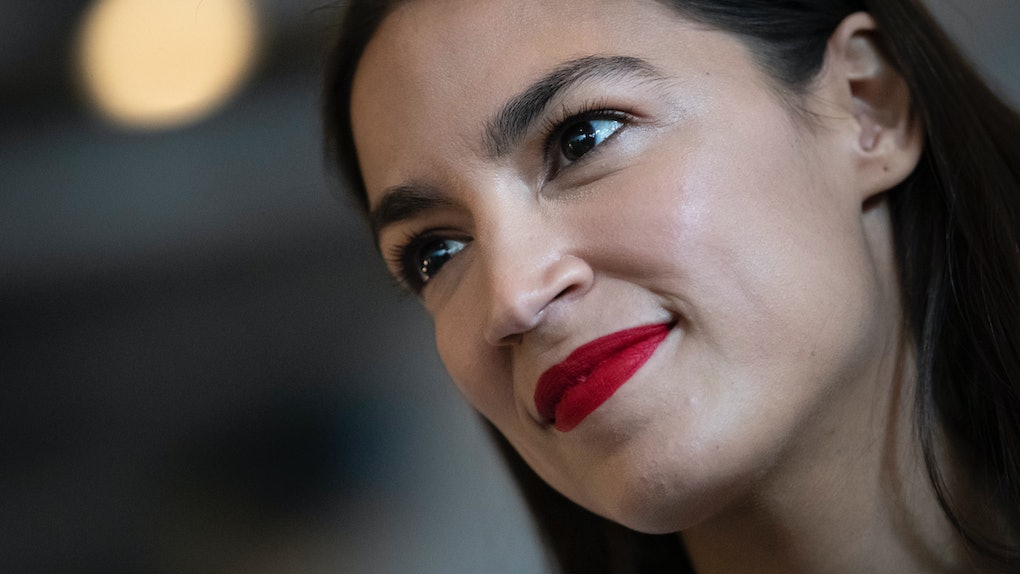 At a time where politics seem more divided along party lines than ever, the news that Sen. Ted Cruz (R-Texas) could be joining forces with Rep. Alexandria Ocasio-Cortez (D-New York) on a bipartisan bill for over-the-counter birth control is a surprising but welcome development. After the Texas senator appeared interested in teaming up with the freshman Congresswoman on a birth control issue on Wednesday, June 12, the 29-year-old is continuing her push for affordable birth control with a millennial-approved reference. Alexandra Ocasio-Cortez's tweet about affordable birth control included a play on some classic Destiny's Child lyrics, and it will have you ready to sing along.

It all began when the unlikely duo decided to start a dialogue about the subject on Twitter on Wednesday, June 12. While Cruz and Ocasio-Cortez are arguably some of the most extreme members of their parties, they've found common ground in a few surprising topics: More strict laws surrounding lobbying and now, easier access to birth control.

In response to a June 7 tweet from Ocasio-Cortez calling for more accessible and affordable birth control, the Texas Senator responded "I agree." He then proposed, "Perhaps, in addition to the legislation we are already working on together to ban Members of Congress from becoming lobbyists, we can team up here as well. A simple, clean bill making birth control available over the counter. Interested?"

Fellow Democrats quickly jumped in to let Cruz know that Washington Sen. Patty Murray (D-Washington) had already begun work on such a bill with a Destiny's Child reference.

"Hi there [Ted Cruz] hit up our girl [Patty Murray] she and I have already written the bill, album dropping tomorrow [AOC]'s vocals (& original co sponsorship) = on point," Rep. Ayanna Pressley (D-Massachusetts) tweeted on June 12. [Katie Hill]'s an original too. Just call it the Destiny's Child of OTC birth control"

Ocasio-Cortez took her role as a member of a Congressional Destiny's Child quite seriously, responding with a play on the '00s group's track "Bills" on Friday, June 14:

"Can you pass these bills / For affordable birth control pills / If they don’t want to /Then the GOP is through."

Nothing like adding some classic throwback tunes to spice up the process of passing a bill, am I right? TBH, I'm very much here for adding early '00s references to any and every part of the political process.

Meanwhile, Murray got in on the conversation as well, tweeting on June 12, "Hi @SenTedCruz. @AyannaPressley is exactly right. We'd all love to have your support for accessible *AND* affordable OTC birth control. Will get you the details."

As of publication, Cruz has yet to respond to the latest tweet, so you'll have to keep an eye on where this birth control bill goes.

You might remember that back on May 30, the New York politician proposed a change in current lobbying laws. She tweeted, "If you are a member of Congress + leave, you shouldn’t be allowed to turn right around and leverage your service for a lobbyist check. I don’t think it should be legal at ALL to become a corporate lobbyist if you’ve served in Congress. At minimum there should be a long wait period."

Interestingly enough, Cruz decided to get on board with the idea and work with the representative on legislation that would prevent former members of Congress from lobbying — and less than two weeks later, he's now hoping to make access to over-the-counter birth control a bipartisan issue.

Needless to say, the Twitterverse is losing it over the fact that the two very different political figure are potentially collaborating once again.

The proposed legislature comes as several states have introduced anti-abortion laws that push back against the protections of Roe v. Wade. So, could cheaper and more accessible birth control be around the corner? Only time will tell, but it looks like these two politicians working together across the aisle is a good start.