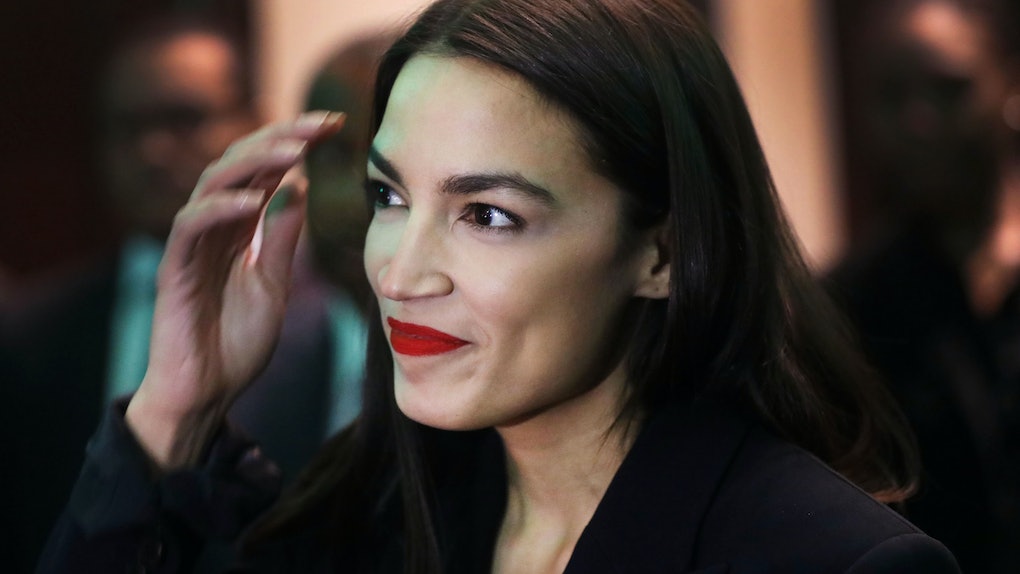 President Donald Trump loves to jab at Rep. Alexandria Ocasio-Cortez (D-New York). Most recently, he reportedly ridiculed her for her days in the service industry, calling her a "young bartender." Elite Daily reached out to the White House for confirmation of the reported comments, but did not hear back by the time of publication. Now, the freshman congresswoman is hitting back, and Alexandria Ocasio-Cortez's response to Trump calling her a "young bartender" makes a great point.

This comes days after the president reportedly roasted her (without flat-out naming her) while speaking to House GOP lawmakers about her climate change initiative, the Green New Deal, at the National Republican Congressional Committee dinner on April 2. "The Green New Deal, done by a young bartender, 29 years old," Trump reportedly told the guests, according to The Hill.

On Friday, April 5, Ocasio-Cortez responded to that reported jab while speaking at Rev. Al Sharpton’s National Action Network convention in New York, taking pride in and owning her past profession. According to Business Insider, she said:

Ocasio-Cortez continued, "I, in fact, am encouraged when people remind the country of my past. Not because of anything about my story but because it communicates that if I could work in a restaurant and become a member of the United States Congress, so can you."

The White House did not immediately respond to Elite Daily's request for comment on her remarks.

Could she have said this any better? I mean, Ocasio-Cortez really pulled herself up by her bootstraps, which is #Goals if you ask me. She started working as a bartender to help her family make ends meet while fighting for her own dreams and became a member of Congress in basically a year, and she made it clear on Friday that working in retail or working in the restaurant industry is something to proud of. During a March 29 town hall with MNSBC's Chris Hayes, Ocasio-Cortez reiterated her experience as a bartender and how it helped shape her current view of the economic system. She told Hayes:

As an economics graduate in the wake of the recession, I decided that I needed to go back home in the Bronx and that I needed to work in education advocacy and organizing, but just economically speaking that wasn't enough. So, I also worked in restaurants ... It really became clear from that experience that our issues and our economic issues are systemic and they are not an accident. They are a result of an economic system that enriches the few an enormous amount at the cost of the working class and middle class.

Trump's reported jab isn't surprising, though, because it's not the first time he's criticized her and her Green New Deal. Back in February, he said the proposal "sounds like a high school term paper that got a low mark." Elite Daily previously reached out to the White House for comment on his remark, but did not hear back.

Trump has also long rejected the idea of climate change, referring to it as a "hoax" and saying that he doesn't think it is "man-made." Why? He has a "natural instinct for science" which helps him understand climate change. Elite Daily previously reached out to the White House for comment on that remark, as well as his other comments on climate change, but did not hear back.

The good thing is that Ocasio-Cortez is a champ at defending herself. So, he can say whatever he wants, but he should know that there's a good chance the New York representative will have a clapback ready and waiting.