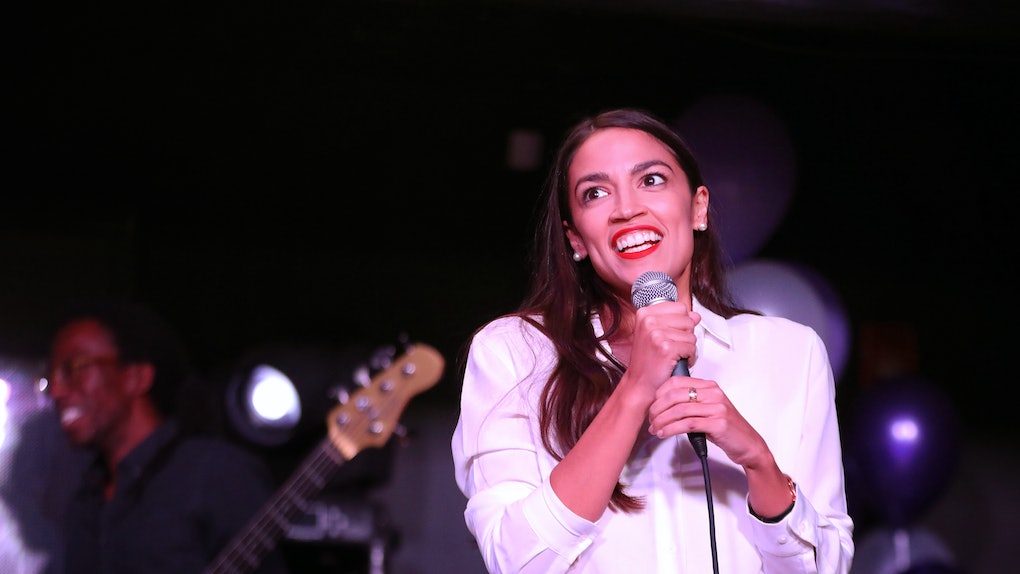 On Wednesday, May 1, Netflix released its long anticipated documentary Knock Down The House, which follows the political journey of four women during the 2018 November midterm elections. Upon its release, it appeared that everyone was tuning in to watch the documentary, and Alexandria Ocasio-Cortez's reaction to Knock Down The House will make you love the project even more.

On Wednesday, May 1, Rep. Ocasio-Cortez took to Instagram to celebrate the Netflix special's release. On her Instagram story, Ocasio-Cortez (D-New York) reposted fans' reactions to the documentary (including Queer Eye's very own Jonathan Van Ness), and wrote her own inspiring messages alongside them.

The Netflix documentary has received praise from the public so far, and as of Thursday, May 2, it holds a 100 percent rating on Rotten Tomatoes. And Ocasio-Cortez seems thrilled by its impact. In an Instagram story on May 1, she wrote,

Love seeing everyone bringing this story into their homes and realizing their own power!

Ocasio-Cortez's win in the November 2018 midterm elections was one of the most inspiring victories in recent years. Not only did she beat out Rep. Joe Crowley, who held the seat for decades, but by winning she became the youngest woman to ever serve in Congress at the age of 29. She represents New York's 14th District covering parts of the Bronx and Queens.

Ocasio-Cortez is a progressive and has expressed her support for a number of issues including — universal health care, free college tuition, and climate change initiatives. Following her surprising win, Ocasio-Cortez took to Facebook late on Nov. 6, 2018 to share a message thanking the voters in New York for supporting her. She wrote,

Thank you. The family of organizers. The neighbors and community of NY-14. Friends, family, neighbors, activists, community leaders. This is about creating our future. Small actions matter so much more than we know.

You know what they say, when they knock you down, just get back up. The new Netflix documentary is sure to be an inspiring message not only for young people getting involved in politics, but for every young person looking to make some serious change in this world.

Lucky for us, the weekend is almost here. For those who are still looking for something to do, Netflix's Knock Down The House documentary has got you covered. Happy viewing everyone!