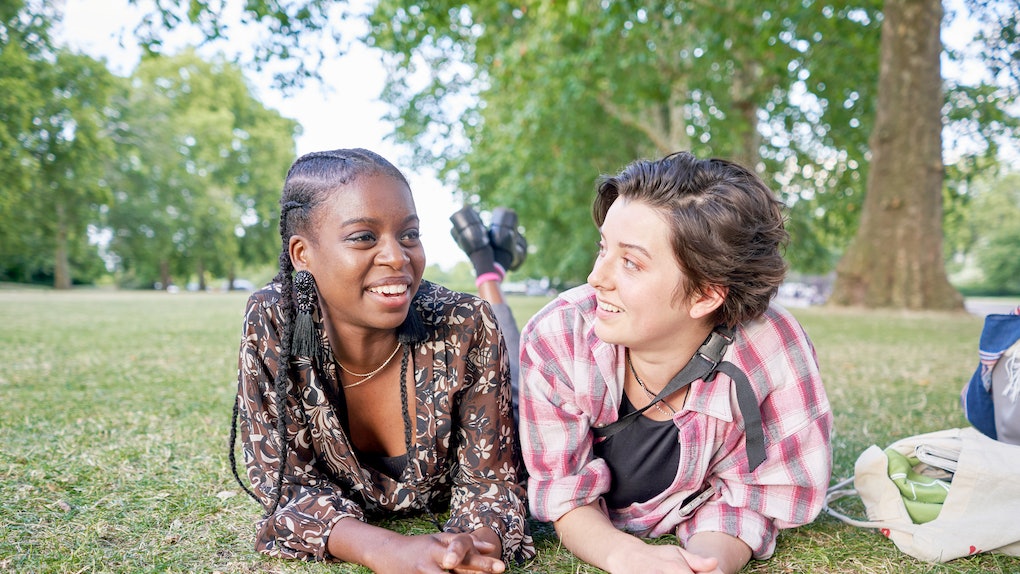 After Catching Feelings, Here's How Each Zodiac Sign Acts

New crushes are full of possibilities. What if that person likes you back? What if you start dating? What if you fall in love and live happily ever after? Of course, there's also the possibility that you'll have no idea someone is even crushing on you. Everyone behaves a little differently around a crush, and after catching feelings, each zodiac sign acts in their own unique way. Some signs are flirty. Some signs are awkward. Some will even go out of their way to avoid their crush entirely. But depending on their sign, you might just be able to spot an admirer.

In elementary school, a crush might have passed you a note saying, "Do you like me? Check 'yes' or 'no.'" Once you've graduated into adulthood, most people become surprisingly less forward about expressing their affection. Zodiac signs make some people naturally inclined towards hesitance, while others are equipped with seemingly invincible confidence, and the way you approach a crush totally depends on your personality. You can never know for sure who's crushing on you until they admit it, but a few telltale behaviors can help tip you off. Here's how people tend to behave around a crush, depending on their zodiac sign.

Aquarians are typically chill AF, so when they start to act uncharacteristically unsure of themselves, it's a pretty good indicator that they have a crush. This air sign tends to revert to immature behavior when they catch feelings, so when they're not fidgeting or stumbling over their words around a crush, they're poking them or pulling their hair to get their attention. They love getting a rise out of people, after all, so pestering a crush is their way of saying, "Hey. I'm into you."

A Pisces may wear their heart on their sleeve, but that doesn't mean they're always terribly forthcoming when they have a new love interest. Because they inhabit a fantasy world much of the time, they're much more likely to fantasize about going on dates with a crush rather than, you know, asking that person out on a date. This water sign is usually pretty upbeat and friendly, so when they shy away from conversation, it's might be the case that they're harboring a secret crush.

Aries are wildly confident, and so when they develop a crush, they usually don't feel too worried — they have no doubt they'll win that person over. This fire sign never hesitates to make the first move and go after what they want, but they also love the thrill of the chase, so they might play hard to get, just because they can. If an Aries drops hints and majorly flirts, then chances are they're waiting for you to come chase after them.

Taurus is known for being the most sensuous and tactile sign of the zodiac, and they often use touch as a way to feel close to others. Rather than emotional intimacy, this earth sign tends to seek physical intimacy with the people they're attracted to, standing close to them whenever they can and using any excuse to make contact. If a Taurus is often tucking in your shirt tag or pulling hairs off your sweater, they might be trying to send you a sign.

Gemini is a sign of duality, often fluctuating between hot and cold with no warning. While these social butterflies may be all over a crush one minute, they're just as likely to give them the cold shoulder the next. Those born under this air sign simply can't make up their minds, which means they're rarely consistent with their behavior around a crush. When a Gemini sends mixed signals, it could be a signal that they like you.

Cancers are already big-hearted mushes, so when they fall for someone, they'll show that person even more love and affection than usual. Unfortunately, it's hard to tell the difference between a Cancer being friendly and a Cancer being flirty. But when this water sign starts baking you muffins, volunteering to drive you to the airport, and complimenting your outfit on a daily basis, it's possible that overzealous friendliness is their way of saying, "I want to be more than friends."

Like their fellow fire sign Aries, Leos are never too worried about a crush being reciprocated — I mean, who wouldn't want to date them? But even though they know their worth, they'll want to make sure the person they're crushing on knows just how awesome they are, too. When a Leo catches feelings, they tend to do a lot of not-so-humble bragging — so if someone born under this sign repeatedly tells you how much they can bench, they're probably making moves on you.

Virgos are top-notch conversationalists, but they're even better advisors. When someone catches their eye, this earth sign will shower them with attention, asking them dozens of questions about themselves and listening intently. But they won't stop there. If a crush mentions they're struggling in a class, a Virgo will appoint themselves their study buddy. If a crush is feeling overwhelmed, a Virgo will volunteer to organize their room. They woo people by transforming themselves into a cheerleader/personal assistant combo.

Libras are hesitant by nature, largely because they care deeply about making the best impression possible and being liked by everyone — especially someone they have feelings for. When they develop a crush, this air sign tends to mirror that person's actions: laughing when they do, leaving the party when they do, and agreeing with everything their crush says. If a Libra just so happens to have the same favorite band, sports team, and color as you, it's probably the result of a crush rather than a coincidence.

Scorpios are cagey and mistrustful, and when they develop a crush, they're far more inclined to hang back and observe that person than engage them in conversation. This water sign loves having secrets, and harboring a crush that no one knows about is the ultimate secret to keep. A Scorpio works hard to cultivate their mysterious aura. If you're curious why that Scorpio is standing alone and sneaking glances at you rather than approaching you, you might just have yourself an admirer.

Happy-go-lucky Sagittarians never shy away from new challenges and adventures. This good-natured fire sign is terrible at keeping secrets (even when it's their own), so any crush they have is not going to stay a secret for long. As they love having a good time, they'll likely go out of their way to make sure the person they're crushing on is always having as much fun as possible, too. When a Sagittarius is even more jokey and energetic than usual, they're probably trying to sling some love arrows your way.

Capricorns tend to do things by the book; for them, chivalry is still alive and well. This sign has old-fashioned ideas about courtship, and when they want to impress someone, they'll try to show it with overwrought gestures that usually end up feeling forced. Capricorns might open your door or pull out your chair — and while that might seem like they're trying too hard, really, they're just trying to catch your eye in their own adorably awkward way.

If you feel pretty certain someone's crushing on you and you feel the same way, go ahead and make a move. Someone has to be the first one to do it, right?