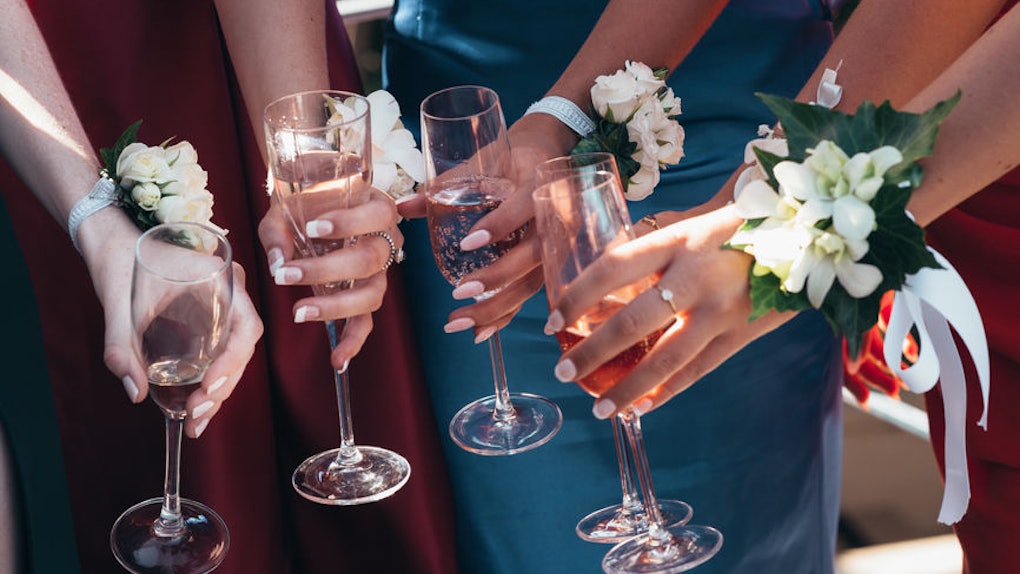 Wedding planning comes with tons of details to hammer out, including the venue, the date, the color scheme, and perhaps one of the more important details, the wedding party. Choosing who will stand next to you as you declare your love and loyalty to your partner is a big deal, and sometimes, it doesn't always go as planned. However, nothing prepared me to learn the story of how a bride Photoshopped a bridesmaid out of her wedding photos, and honestly? Good for freaking her. Photoshop exists for a reason, right?

As drastic as it sounds, it was probably for the best, all things considered. Straight up, the story sounds like something straight out of a Katherine Heigl movie. As Yahoo! reported, a bride recently took to Facebook to explain why she had Photoshopped her wedding photos to no longer include one of her bridesmaids. According to the bride's Facebook post, she had only chosen this woman to be a bridesmaid because of outside pressure from family and friends, and after she was chosen, the bridesmaid wasn't exactly thrilled with her new position.

Now, it's no secret that being a bridesmaid isn't always a walk in the park, and can actually be pretty stressful and expensive. You have to buy a dress, a gift (or multiple gifts), and possibly pay to get your hair and makeup done the day of the wedding — and that's not even considering any travel expenses for the wedding or bachelorette party. It's a lot, so it's understandable that a bridesmaid might not be able to make it to every part of the celebration, but in this case, she didn't even want to. At least, that's what the bride said on Facebook.

"I assumed it was because we are so different, and so she felt like she would be excluded and while trying to make her feel included, I respected that she seemed disinterested," she reportedly explained. The day of the wedding, the bridesmaid didn't get ready with her fellow bridesmaids, showed up just in time to walk down the aisle, and basically ignored the bride the whole time. According to Yahoo!, the bride also claimed the woman reportedly "made eyes" at the groom multiple times before leaving without bidding the bride farewell.

So, the bride decided to be the bigger person and reach out to the bridesmaid after the wedding. "Her response was to write me paragraphs about how awful I am, how I refused to include her in any bridesmaids duties and how I ghosted her," the bride wrote on Facebook. Yeah, obviously not what anyone would want to hear. So, the bride decided to do the only sensible thing she could think of: make sure she didn't have to see this woman's face ever again. She Photoshopped her right out of her wedding photos.

"Just because someone caused a stink at your wedding doesn’t mean that you have to look at them whenever you look back on your pictures," she explained on Facebook. Good for her! You don't want to look back on your wedding photos and feel any ounce of bitterness, so if Photoshop is what it takes to make that happen, then edit the haters away. For this bride, it was the best possible solution.