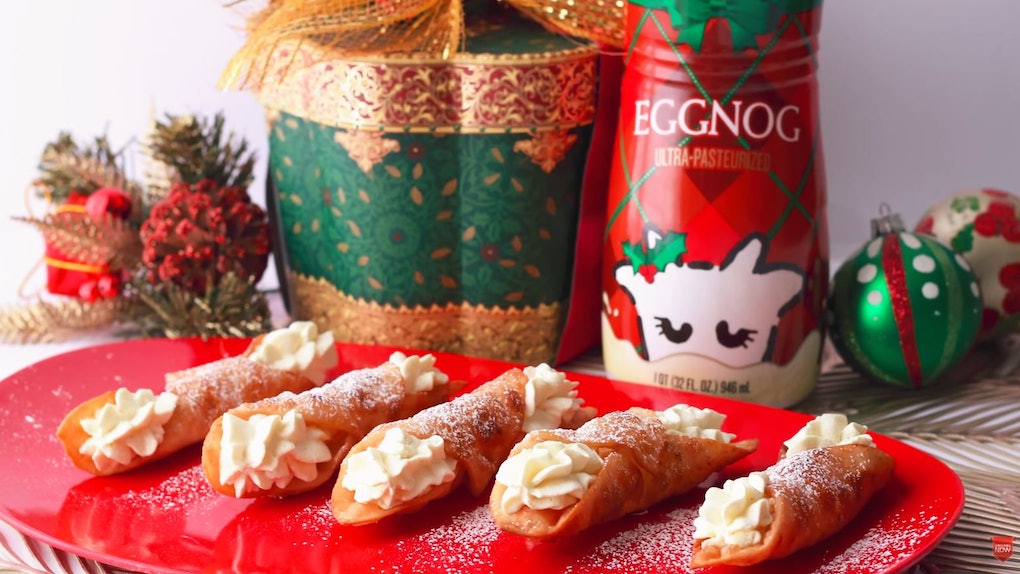 It's the most wonderful time of the year, which means our favorite seasonal flavors like peppermint, gingerbread, and cinnamon are finally making their way back into stores. You know that also means you'll soon be seeing eggnog making its epic comeback. Eggnog is creamy and delicious, and I absolutely love it. Even if you're not a big eggnog drinker, you can't deny that it instantly reminds you that Santa Claus is coming to town. It's a great drink to have straight up with some holiday spirits, but there are also some holiday-inspired things to cook with eggnog that are just as delicious.

You'll definitely be having sugar plum fairies dancing in your head with all of these sweet recipes. Why not have your friends over for a eggnog party? You can serve all things eggnog, from pancakes, to cheesecake, to ice cream. If you're not a fan of just eggnog, there's no denying you'll love one of these nine recipes with eggnog in them. You even have everything you need for an eggnog-themed breakfast on Christmas morning. You can also leave Santa an eggnog-flavored treat instead of your traditional sugar cookies this year.

All I know is I have to run to the store to stock up on all of the eggnog possible, because I'm so eggcited to try out every single one of these recipes.

This is a super simple recipe to make individual eggnog cheesecakes. This is a great recipe idea if you're looking to make something sweet for a holiday party, or if you want to get on the nice list at your office potluck. You could always just make them for yourself if you're feeling naughty and don't want to share, too. We won't judge.

This ice cream is great to add on the side of any eggnog dessert you prepare, to instantly make it a la mode. Or, you can savor it all on its own while streaming a holiday movie marathon.

I can't imagine a better Christmas morning breakfast than some eggnog pancakes. This recipe is super simple to make, so if you're not a whiz in the kitchen, you can still knock these out. The result is some super fluffy pancakes that look almost too good to eat... but we'll eat them anyway.

Double the eggnog, double the fun. This is a great eggnog pound cake recipe that you can put to good use for any holiday party. You can also use the eggnog icing recipe to make icing for any other flavor cake that you want to give an extra eggnog kick to. Yum!

Fudge is something you might not consider at first to serve at your holiday party, but it's something super simple for so many guests to enjoy. You can just grab a square (or several) and keep on partying. Also, you totally had us at marshmallow cream. We'll just be over here swooning.

For all of my fellow friends who are obsessed with chocolate, this one's for you. There's so much goodness going on in one little cupcake. It's the gift that keeps on giving.

This is another great idea for a sweet Christmas morning breakfast that the entire family will enjoy. Bread pudding is already a great holiday dessert, but adding in the eggnog flavor just makes it even more holly jolly. You can also drizzle on some rum glaze for a little boozy kick.

These little guys are like holiday cannolis, but made with tortillas. I'm sure you can even just eat the eggnog mousse on its own with some fresh fruit, and it would be absolutely delicious. Don't forget to sprinkle on the powdered sugar that looks like a little winter snowfall to complete the presentation.

I guess we're going to be eating a lot of eggnog-flavored breakfast this time of year, because we just have to try this eggnog French toast, too. A warning, though — even if you're just a little hungry, beware of watching this video. It'll make you want to run to the kitchen pronto to eat all of the eggnog food you can make.