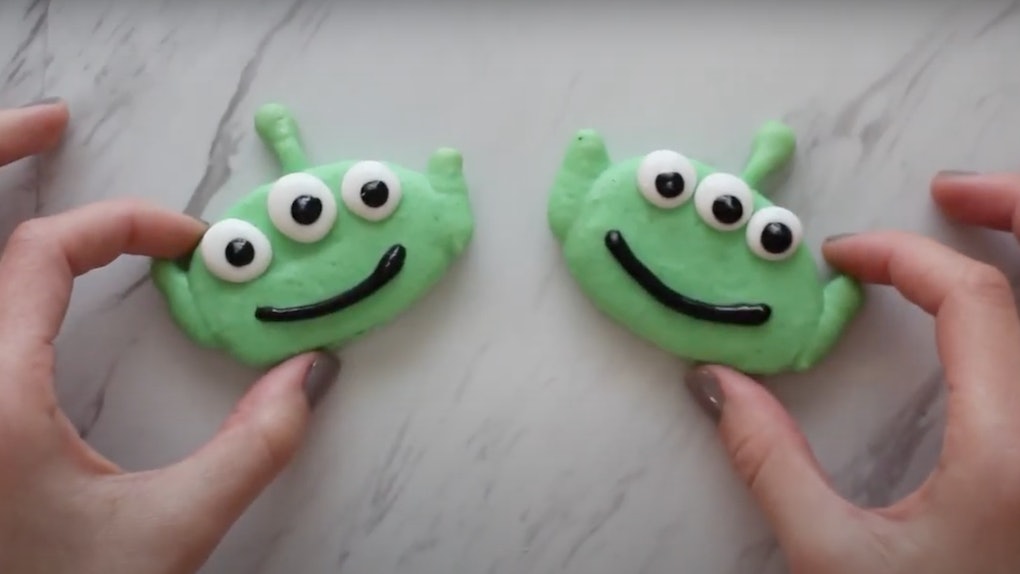 While you're watching Ratatouille on Disney+, it's kind of hard not to crave a little ratatouille yourself. Not to mention, the Pizza Planet pizza from Toy Story and bao buns from Bao always look tasty AF. That's why getting your hands on a few recipes of Pixar treats you can make at home will only help bring all the movies and shorts you love to life.

Imagine treating yourself to a delicious Jack-Jack cookie while you rewatch Incredibles 2. It sounds like a sweet plan for your next movie night in. The only thing that would make these recipes even better is if you had a little assistance in the kitchen, like Remy, pulling the strings. Although, these recipes are easy to follow for anyone who's new in the kitchen or has major skills.

A cute idea for your next date night with bae could be combining dinner and a movie with one common theme. Whip up any of these Pixar-themed foods in the kitchen, and then, enjoy them while watching your favorite Pixar movies. You could even throw yourself a Pixar-themed birthday party with a delicious spread. Or perhaps you simply want a taste of Disneyland while you're at home. Whatever the case may be, it's time to put on your apron and get to the kitchen, because despite it being Disney, these dishes aren't going to make themselves.

As adorable as the bao may be in the Pixar short, Bao, it still makes your mouth water for some steamed buns. Use a recipe straight from Pixar. This tutorial even features an adorable animated bao that'll put a smile on your face while you're working in the kitchen.

Since you first watched Ratatouille, you've wanted to try the dish that saved the day. You don't even need Remy's help in the kitchen in order to make it happen. This recipe is simple to follow along with, and will get you a confit byaldi version of the dish in no time.

In every Pixar movie you watch, you're on the lookout for the infamous Pizza Planet truck. You wish the Toy Story pizza joint existed IRL so you could grab a slice from it. Well, this pizza recipe — with the help of Forky — will help you make your very own Pizza Planet pie to enjoy at home.

4. No Fish Tacos From 'Finding Nemo'

Nemo can breathe a sigh of relief, because these tasty tacos are totally tofu. After all, "fish are friends, not food." This Disney Family recipe will help you make some delicious no fish tacos to enjoy while you watch Finding Nemo and Finding Dory back-to-back.

Merida may have been focused on shooting for her own hand, but you may have been a little distracted by the delicious iced rolls in the movie, Brave. For anyone who's looking for something sweet for snack, these iced rolls are the way to go.

The answer to whether or not you would like more tamales is always, "yes!" Make as many tamales as your heart desires thanks to this recipe inspired by the Pixar movie, Coco.

Another beloved Pixar treat from Disneyland that you can enjoy at home are these Alien Macarons from Toy Story. These are macarons with a blackberry buttercream in the shape of the adorable little green men. Don't forget to snap a pic before you take a bite.

Wrap up your Pixar-themed meal with a little cake (Disneyland's Pixar Fest celebration cake, to be specific). This recipe is made to resemble the Pixar ball with three colorful layers — yellow, red, and blue. You know your foodie pic will pop on the 'Gram with just the right filter.

More like this
8 Disney-Themed Charcuterie Board Ideas To Add Some Pixie Dust To Your Movie Night
By Rachel Chapman
7 TikTok Recipes Using Ramen To Make Lasagna, Pizza, Smoothies, & More Treats
By Kelly Pau
The TikTok Recipe You Should Try, Based On Your Zodiac Sign
By Chelsea Jackson
Stay up to date