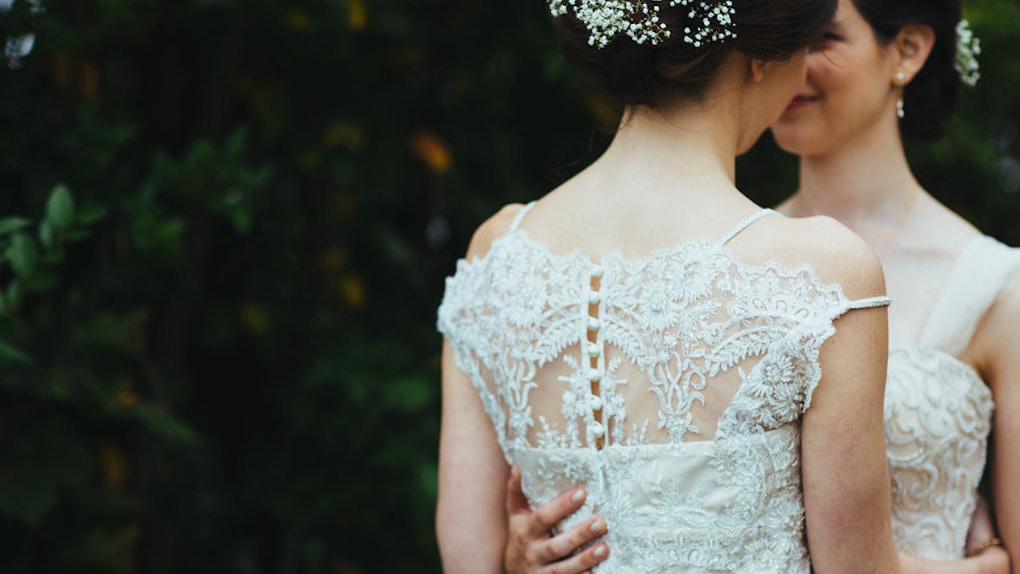 I'm not a very sentimental person. I've never cried during a movie or TV show. I didn't get weepy when my parents moved out of the house I'd grown up in. When my friends need a shoulder to cry on, they know that I'm not the best choice. But weddings? They really get to me. It doesn't matter if I'm the plus-one at the wedding of my husband's coworker whom he barely knows himself — I'm going to lose it when the couple shares their first kiss. So you better believe that when people share their most sentimental wedding stories I melt into a gooey puddle.

After I leave a wedding, I don't remember what the table centerpieces looked like. I don't remember the color of the bridesmaid dresses. I don't remember what the cake tasted like. (JK, that's a lie. I always remember the cake.) What I remember most are the looks exchanged between the couple, and the moment that I burst into tears during the vows, and the first kiss. In the Ask Reddit thread about best wedding moments, users shared their sweetest and most unexpected wedding stories, and I'm still crying. Be warned: You might want to grab some tissues before you read these.

When my dad and I rounded the corner to walk down the aisle and everyone stood up... it blew me away to see all these people I knew from different parts of my life, all there to support us. Like, my childhood friend standing next to my aunt, standing next to my husband's coworker. It made me think of the funeral scene at the end of the movie Big Fish in a way.

Two of my best friends used to be your typical loud, brash, full-of-life dudes that never had a dull moment. They were the same at my wedding, but a little mellow and they seemed to be talking earnestly to everyone and were just much more somber than normal. That was surprising in itself, but even more so, as they came up to us to congratulate, they pulled my wife aside and had a mini conference with her, at the end of which she was blushing and had teary eyes.

I’ve never seen them be that serious before and have such an effect. To this day, I do not know what they told her (she doesn’t tell me per their request), but that scene is of my fondest memories of the wedding.

My dad was in poor health for a long time before my wedding. He had debilitating back problems, was in pain pretty much constantly, and quite unsteady on his feet. Because it was outdoors and rainy, and because I feel uncomfortable with the concept of being "given away," we agreed that I would walk myself down the aisle to prevent him from falling on the slippery path. I was sure if we walked together we would both end up falling down.

Plot twist – when we did our father-daughter dance, to "Sweet Pea" by Amos Lee, he busted out moves I hadn't seen since I was 14 and dancing with him in the kitchen. I was amazed. He always had stage fright, too. People clapped and cheered when he twirled me around. It was perfect.

He passed away about 6 months later and my mother-in-law sent me a ton of photos from our dance. She even had some made into magnets. I really treasure the memory of my surprise when he started leading me around the dance floor. He had this huge smile, like he knew I would be floored.

It was eight years ago but I still relive the moment laughing with my dad before he walked me down the aisle and seeing my husband mist up and almost cry. Just the flood of emotion: Love, joy, silliness, elation, and wanting to cry and laugh at the same time.

The biggest surprise for me was that I was able to clearly and calmly recite vows.

I have social anxiety which is worst when I have to speak in front of a crowd. My husband is very much the same way. We decided not to do any personalized vows. I told my brother (our officiant) to keep the ring exchange script as short as possible, but it was also important that it not be something that felt unnatural for us to say, like, "With this ring, I thee wed," or whatever. He came up with a script that was worded beautifully, but I had to repeat several lines, and I was nervous about it during our rehearsal.

During the ceremony, I only saw my husband and heard my brother's voice, and I breezed right through it.

Once I made it down the aisle during our ceremony (even though we were surrounded by 100 of our family and closest friends), it felt as if it was only my husband and me️ in the park that day. It was an incredible feeling to have the whole world fade away and just share that moment with him.

I've never seen my husband so nervous before! His hands were shaking when he put the ring on my finger. Also the look on his face when I started walking down the aisle, I'll never forget that. And my uncle decided to surprise us with a few big fireworks when we said "I do" (it was an outdoor wedding in my grandmother's backyard). It was a really lovely day.

Neither of us is religious and we didn't want to hire some stranger to do it for us, so we got my brother to perform the ceremony for us. I wrote the program, paid to get him ordained, the whole nine yards. He was super nervous in the months leading up to it, just freaking right out. He was sure he'd just faint in the middle of it, but I believed in him. He had to have a couple drinks to calm his nerves before we came out.

And he rocked ... The man is a natural performer, and he made it so much more beautiful than I even imagined when I was putting it together.

My girl friend I've known since I was four years old made a speech during our open mic time. It was a really huge surprise because this was the girl who used to throw up before and after class presentations and often cried during them. She's terrified of public speaking, and specifically requested not to make a speech at her own sister's wedding. Yet, for me, she managed to suck back a few shots and say some really nice things to me.

Whether you're a total sap or totally impassive, there's no denying that there's something special about wedding days. Even if you forget the little details, you'll never forget the moments that matter most.