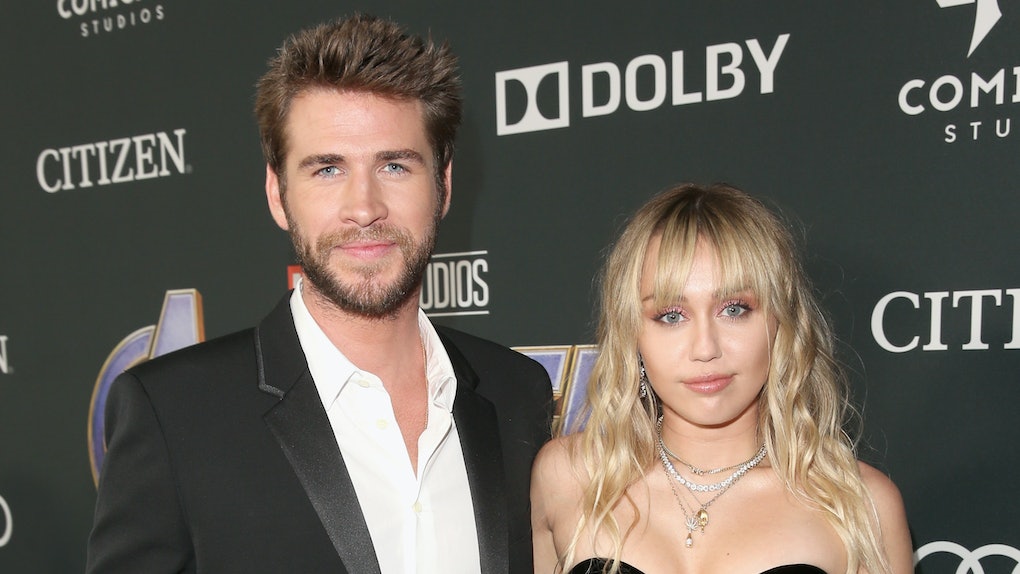 OK, not to be dramatic, guys, but love is dead. Or at least that's how I've been feeling ever since TMZ's report that Liam Hemsworth filed for divorce came in like a wrecking ball on Aug. 21. Yes, I should have seen it coming ever since they announced their separation and Miley Cyrus was later spotted canoodling with Kaitlynn Carter while on vaca in Lake Como. But if these tweets about Liam Hemsworth reportedly filing for divorce from Miley Cyrus prove anything, it's that I'm not the only person feeling totally shook right now. (Elite Daily reached out to representatives for both Cyrus and Hemsworth, but did not hear back in time for publication.)

After all, PEOPLE reported on Aug. 13 that the couple isn't necessarily rushing to divorce. “They both agreed it’s better to spend time apart," a source close to Cyrus claimed, "but this doesn’t mean their relationship is completely over.” However, according to TMZ, Hemsworth filed legal documents in Los Angeles citing "irreconcilable differences," which is celeb-speak for "none of your business."

Fans have taken to Twitter to mourn, and user @nasalightning used this crying Kim Kardashian GIF to convey how she felt. "Liam officially filed for divorce against Miley," she tweeted. "Well it's over."

The news is tough to take

@jaquingonz shared this equally-fitting sad SpongeBob Square Pants GIF to express all the feels along with the caption, "Seeing that Liam filed for divorce from Miley."

Some fans were still listening to "Slide Away" on repeat when TMZ ruined the day for everyone with this news. "Miley dropped a single and Liam dropped divorce papers on the table.... damn," @esuorp tweeted. "Happy Hump Day."

Honestly, not sure how @JessCraft and I are going to make it through the day. "Listening to Slide Away when I get the @enews noti that Liam filed for divorce from Miley," she tweeted. "Now I'm crying in a conference room at work."

For some, "Slide Away" is the only thing that can soothe the pain right now. As @MileyxTea tweeted, "Me: Alexa play Slide Away."

@nicolelovar started a much-needed thread for Liam-Miley shippers in need of a shoulder (or tweet) to cry on. "So guys. It's official," she tweeted. "Liam Hemsworth has officially filed for divorce from Miley Cyrus after 7 months of marriage. Please use this tweet as a space to vent during this difficult time."

@ThePamQuinn filled me with even more dread by pointing out that bad news always comes in threes. "First the news about Spiderman #SaveSpidey THEN the news about Liam officially filing for divorce from Miley... now what?" she tweeted. "Are they cancelling GLOW? Is a kitten bite poisonous? Someone check on Ruth Bader Ginsburg!"

And shout out to @11NightsInJune for knowing that there's no better time to use this gem of a Tyra Banks GIF than when your fav celebrity couple splits. "Hearing Liam Hemsworth officially getting a divorce from Miley," she captioned the GIF.

Welp, I guess there's only one thing left to do now. Alexa, play "Slide Away" on repeat. Also, if someone can make sure that RBG is OK, that would be appreciated.