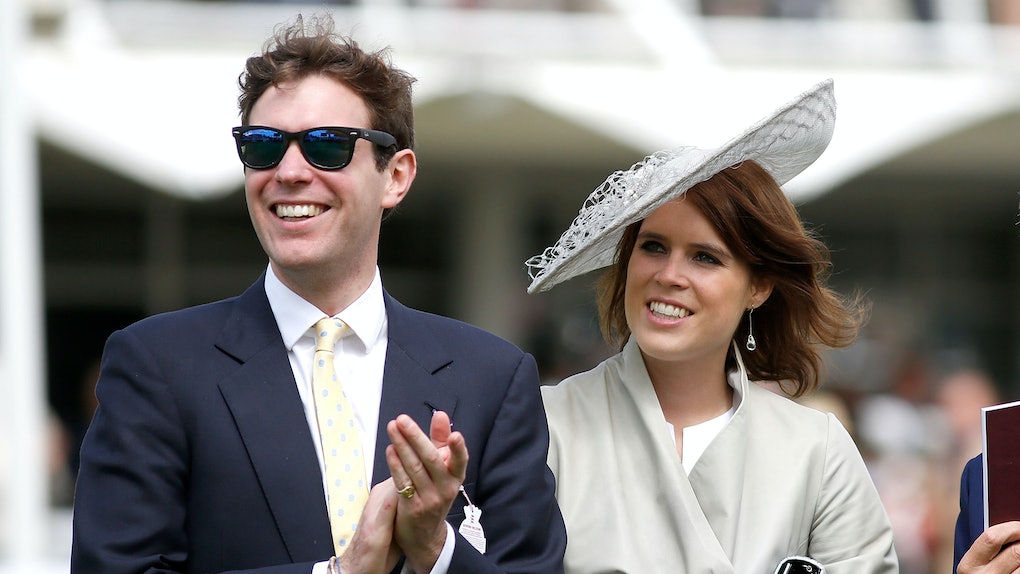 8 Photos Of Princess Eugenie & Jack Brooksbank That Are #RelationshipGoals

If you love following the goings-on with the British royal family, I have great news for you. The royal family is preparing for their second wedding of 2018! Princess Eugenie and Jack Brooksbank are set to tie the knot in less than two weeks on Oct. 12. In case you aren't familiar with the couple, allow me to introduce you with the following photos of Princess Eugenie and Jack Brooksbank.

The princess is the granddaughter of Queen Elizabeth and the daughter of Prince Andrew of York and Sarah Ferguson, Duchess of York. She is a first cousin to Prince Harry and William, as well as the ninth heir to the throne. The couple met while skiing in Switzerland in 2010, and had been dating for seven years before Jack proposed during a vacation in Nicaragua this past January. Brooksbank, who is not a royal, is currently the UK ambassador for George Clooney's tequila brand Casamigos. Like Prince Harry and Meghan Markle's union earlier this year, this wedding will also transform another "commoner" into British royalty.

In addition to being a royal, Eugenie is also the director of Hauser & Wirth fine art gallery. She and Jack are a lovely match made in royal heaven and clearly head over heels for each other. The following photos show just how smitten and comfortable they are with each other, which can only mean the photos of their upcoming wedding are sure to blow us away.

Even at formal events like the Qatar Goodwood Festival, the couple clearly knows how to relax and be a little bit silly together. Which is honestly how we're all trying to be.

Another shot from the same festival shows just how comfortable they are together. Jack's laughter also indicates that he really appreciates Eugenie's sense of humor.

The Chelsea Flower Show is an annual event that has been thrown by the Royal Horticultural Society for well over a century. This seriously cute photo from the event in 2016 shows the couple's ability to participate in the princess's family traditions and have fun while doing so.

Eugenie and Jack got engaged during their vacation in Nicaragua in January of 2018. This photo isTs from their official engagement announcement at Buckingham Palace. Honestly it's hard to ignore how much they're glowing in this photo. Both of their giant, warm smiles and the way they make eye contact with each other show just how ready they are for those wedding bells.

This snapshot of the couple at Easter service in April shows how the couple seamlessly fits right into the family's holiday events. Eugenie's happy glow is hard to ignore as she stands next to her fiancé.

The great thing about this couple is that both Eugenie and Brooksbank consistently seem good natured and happy in both royal and regular settings. This photo of the couple at the royal wedding in May exemplifies how comfortable they are with each other and other members of the family.

The caption for this cute AF photo was, "Clearly I said something funny this time. Sums up Jack in a nutshell!" Jack's face honestly says it all. You totally want to marry someone that finds your jokes this funny.

V&A Summer Party at the Victoria and Albert Museum on June 21, 2017

The joy from this recent photo of the couple from this summer is honestly contagious. This event wasn't super formal like other events they've attended this year, and yet they still look super regal. You can see their comfort with each other simply by their close, yet casual, embrace. I love the way that Eugenie looks at Jack — they seem like they have a lot of laughs together, which is totally at the top of my #RelationshipGoals list.

If you enjoyed these photos of this couple, you should totally tune into their wedding on Oct. 12. The couple has invited the public to their wedding and scheduled a traditional carriage ride after the ceremony. Eugenie has also specified that the wedding will be plastic-free to align with her environmental beliefs. If you wanted more photos of the couple, don't worry — there's bound to be more smiles from these two for years to come.