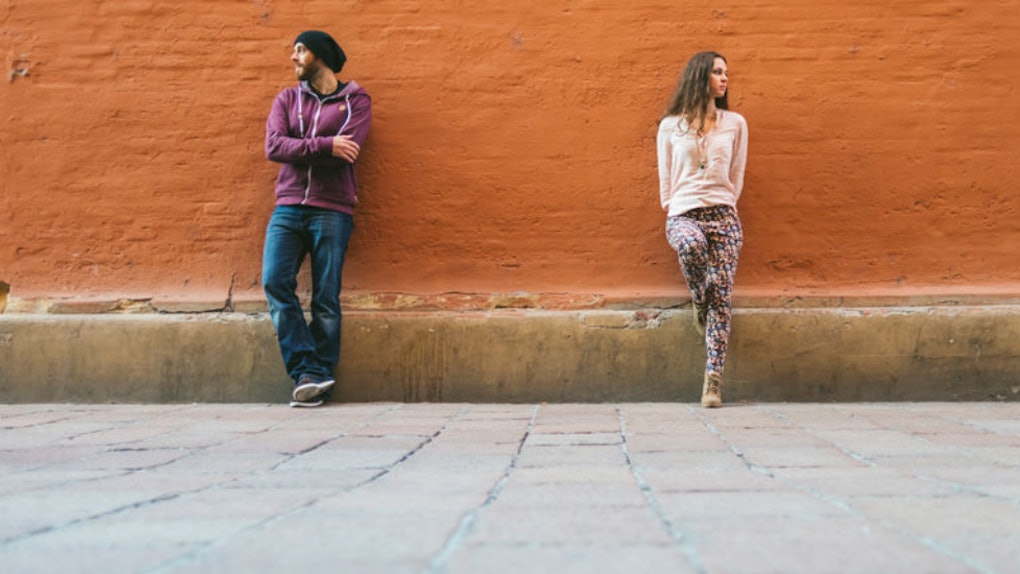 So, you're seeing someone new, and so far everything feels perfect. You get along swimmingly, the chemistry is absolutely there, and you can't keep your hands off each other. But no relationship, no matter how wonderfully it starts out, is immune to an argument every now and then (we're all humans with different life experiences and opinions, after all!), so it's natural to be a little worried about fighting with your partner for the first time.

The good news is, if you're in a pretty stable relationship and you're both open to communicating through your issues, you'll be just fine — and your first fight shouldn't be too bad. Plus, it's a good learning experience, especially if you're with someone you can see a future with. Once you see how your partner responds to conflict (and how you interact with them in the moment) you'll be able to better handle issues in the future.

It's also worth noting that if your fights with your partner are frequent and often go unresolved, that's a sign that you might not be the best fit for each other. The occasional argument is normal, but constant fighting — especially if they tend to escalate to yelling and make you worry about the future of your relationship — isn't something anyone should put up with in a relationship.

Every fight is different, but for the most part, this is how your first argument will likely go in a new, healthy relationship from conflict to resolution (and maybe even makeup sex).

Honestly, your first fight will probably be over something really small, especially if you haven't been dating for very long. You're still getting to know each other, so you're both equally likely to say or do something that annoys or upsets the other person without even realizing it would be an issue. So, let's just say your partner says something that upsets you — now what?

OK, so, being passive aggressive isn't exactly the best way to handle a conflict — especially not one with your partner — but it tends to come out when you've never had an argument with a particular person before. You'll find yourself trying to pretend that nothing's bothering you even though you're still giving off clues that you're upset. And your partner, picking up on these hints but not knowing what they actually did or said wrong, will keep trying to ask despite your denial. You're upset, they're confused, and you're both kind of annoyed with each other — not fun!

3. You finally say what's on your mind.

After a few times of telling your partner you're fine despite their insistence to tell them what's wrong, you'll cave and try to calmly tell them what's on your mind. And maybe it's just that you're both too in the moment and too in your own feelings to have an actual conversation about it, but it doesn't quite go according to plan. It's like they don't understand where you're coming from, but it's also too fresh for you to explain it, and you don't quite know how to articulate what the problem is.

4. You both get a little heated.

At this point, you're both struggling to get your points across, and neither of you are really listening to one another, so you're not making any progress on resolving things. You can feel yourselves getting more frustrated and you don't really know where to go from there. You know you're in this phase when you find yourself internally wishing you had some sort of referee there to keep you from talking over each other. (Do relationship referees exist? Maybe they should.)

Thanks to all that frustration, you decide that enough is enough and it's time to walk away and take a break from the conversation. Maybe you walk into another room or motion to leave the apartment, but either way, you just want time to yourself to calm down and think about what you want to say.

6. You stop and talk things out.

Before you can actually leave, your partner says something that actually resonates with you and makes you feel like you're getting somewhere. So, you decide to stick around and actually talk things out, calmly and rationally. You'll know you're in this phase when you feel your typically stubborn self soften up a little bit. You can tell your partner knows they hurt your feelings, and you're ready to really work things out and not talk over each other anymore.

7. You find a resolution.

Once you've both gotten everything out there and have apologized for the parts you've played in the fight, you'll know you've reached a resolution. When you're both on the same page about what just happened and why it caused an argument in the first place, you'll be able to move on and be even stronger together than you were before — and you'll know how to deal next time.

8. You check in with each other.

The final and most important phase of your first fight (and hopefully any and all fights to come — hopefully they're few and far between!) is the part where you check in with each other. You've talked, you've apologized, you've compromised, and you've figured out how to best deal with similar situations in the future, and now it's time to make sure you're both feeling OK and remind each other how you really feel about your relationship.

If you're already in the stage of your relationship where you say "I love you," don't leave that part out! You'll feel so relieved, knowing that you're both on the same page. And you'll know you've made it to this phase when you feel like you want to drop everything and kiss your partner. (And of course, there's always the potential bonus round after this: makeup sex.)

Your first fight might not exactly be a fun thing you go through together, but if you're considerate and thoughtful of each other in the process, and willing to learn from your mistakes, you'll be just fine.