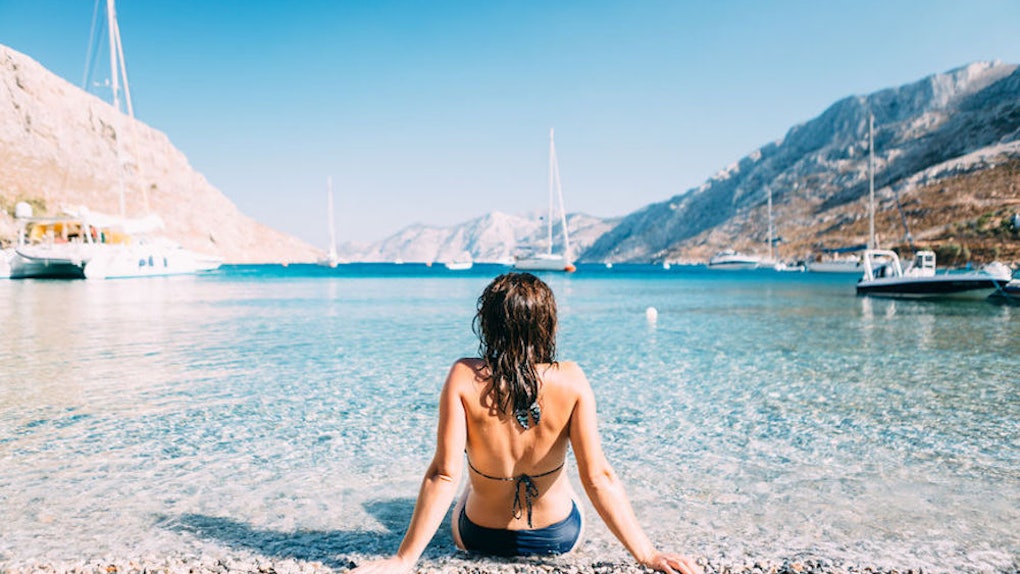 7 Underrated Greek Islands That Aren't On Your Bucket List, But Should Be

At least once in your lifetime, you need to get yourself to the Greek. You've likely seen pictures of the pristine beaches with teal water that stretches to the horizon line. You've imagined yourself lounging in the sun and eating fresh fruit on a boat. But, pinky promise me that you won't leave that image in your daydreams. *Extends pinky finger through the screen.* You need to step into the fine sand and see those beautiful white houses amongst the cliff sides for yourself. Do yourself a favor, though, and scope out some of the underrated Greek islands. You know: The specks on the map that aren't on your bucket list, but really should be.

Up until now, you assumed that Santorini or Mykonos would be everything you're looking for. Don't get me wrong: Those islands are like another planet, with sunsets and cobblestone streets that feel otherworldly. It's just that there are so many other places to explore as well, beyond the beaten path. So, why not make your destination somewhere that's meant for only true travelers?

It won't be easy to get to such untouched shores and serenity. You'll likely have to take a ride on a small boat or plane. But, the journey will be well worth the journey. Make one of these seven spots your next destination, and thank me later for such a sweet addition to your bucket list.

Natural beauty, nightlife, and luxury on every corner — what more could you ask for? Rhodes may not be the most remote of the Greek islands. But, it's definitely a good place to start, especially if you're looking to get away from tourist traps.

According to DiscoverGreece.com, this destination is all about its atmosphere. The restaurants are rather gourmet, and in some villages women bake bread in an oven outside. At the beach, you'll smell the salt water in the air, and then the town will be full of aromas from the local cuisine. It would be impossible to not spend the week with your head in the clouds.

Traveling always comes with a bit of "roughing it." But, when you're in destinations that have barely been discovered by tourists, you don't even mind. Living out of a suitcase — without the necessities, like a curling iron — feels just right. You're amongst the terrain, and finding spots on the beach to call your own. Who cares if your hair is in a mess of curls?

Folengandros is one of those places where you leave your worries behind solely for the adventure. It has the beautiful views and beaches of the more touristy spots, without the crowds. You won't be able to do much except hike or hang in the sun, according to the Travel Channel, nor is there a five-star resort waiting for your arrival, but it's all about the experience. Nonetheless, sign me up!

Let's keep this one short and sweet: Kos is a magical find for those in love with the sun and surf. There are beaches with turquoise water and even a few springs. The island is like a taste of paradise, or an endless summer.

According to VisitGreece.com, you can reach this island from the mainland via ferry or airplane. Be sure to bring along some sunscreen, a beach towel, and possible a camera, too. Something tells me the Internet or Instagram doesn't quite do it justice. But, you might as well try and capture the beauty for your followers who are hanging back at home. (Want to keep this place a secret? Don't tag the location!)

Every Mamma Mia fan will want to check out Skopelos, Greece. According to IMDB, this island is one of the primary shooting locations for the movie. So, keep an eye out for those spots where you can recreate your favorite scenes.

Naturally, you'll want to pack some extra maxi skirts or a denim bathing suit in your bag. You'll hop on a boat, explore the town, or walk the stairs to the church on the hill. How else would you channel Young Donna (aka, Lily James) than with the right attire and a free-spirited soul? She would be proud that you're so dedicated to living your #bestlife. Next stop: One of the other islands from the movie!

The next item on your bucket list should be to head to Hydra. In the past, this island has been a hotspot for celebrity guests like Sophia Loren, according to The Seattle Times. She played a role in the film, "Boy on a Dolphin," which was filmed against the backdrop of Hydra's sparkling waters.

You won't be roughing it here. Although, you will notice that there are no cars or bikes on the road. That's quite the change-up from your street in New York City, huh?

Any traveler or tourist could check out the waterfalls in Iceland, or the dreamy spots on the Italian coastline. But, few will choose to go to an island that's small and rather remote. Truth is, not everybody is looking for that kind of serenity, and would rather see the sights. They don't know that they're missing out on colorful mansions and cute cobblestone streets that wind around this gem in the Mediterranean Sea.

Kastellorizo won't have those long-stretching beaches that you're used to seeing all over social media. However, you'll want to take an afternoon to explore the sea caves. Galazio Spilaio, or "Blue Cave," takes the sunlight and turns it into the most wonderful natural attraction.

Last but not least: Ikaria is the underrated island you must go to for complete relaxation and to get away from reality. Right now, you're caught up in your busy schedule. You've neglected to book a trip anywhere in the world, because you just don't have the time or, let's be honest, energy. But, this spot is known for its natural beauty and, oddly enough, longevity, according to The Guardian. You're going to want to go here to bathe in that pixie dust and healthy living, so pack your bags.