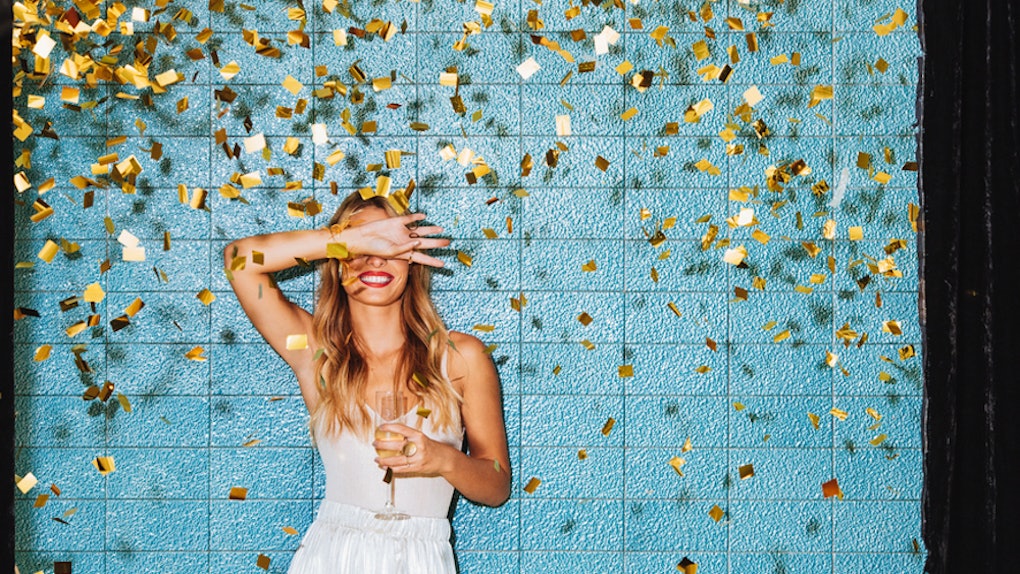 7 Things To Do On New Year's Eve When You're Broke

Pop the champagne... It's almost New Year's Eve. You might already have plans in the city or a sparkly outfit hanging in your closet just waiting to hit the dance floor. But if you don't have plans or pennies to spend ringing in the New Year, don't fret. Our bank accounts are wiped from the holidays, so partying in the city or booking that suite downtown just isn't always an ideal option. Sure, a little party never killed nobody, but bar covers and a little black dress might truly put your bank account into shock. Lucky for you and your crew, there are so many things to do on New Year's Eve when you're broke.

The city never sleeps, but you sure do. You're probably feeling like the lamest of them all right about now. Your friends have texted you a million times with tickets to clubs or getaways for the night of — truly an "ugh" moment.

As a 20-something, you might feel like you need to have all the energy, and maybe money, in the world for this sort of thing. You're not quite a broke college kid anymore, but your funds for fun are limited. Maybe you just moved into your own apartment or are saving up for other things you want to do. It's OK to not want to drop loads of cash on one night.

So, if you're in the need of a cheaper and chiller celebration, here are seven creative things you can do to still make your midnight magical. Happy almost 2018, all.

The Christmas music might not be on repeat anymore, but we're still walking in a winter wonderland. Make the most of your New Year's and the cold and go to a local ice skating spot. Skates are normally free, or can be rented for a very low price, and you'll be sure to make a memory or two when somebody takes a tumble.

Pampering over partying any day. What better way to hit the refresh button before the new year than a spa night? Maybe the holiday season has you incredibly rundown, or you're in desperate need of a pedicure. Give your body a break with endless bath bombs and a good book. You'll be happy to be starting the year off regrouped and relaxed instead of drained and hungover.

Midnight at the museum. OK, so maybe your local spot won't be open that late this New Year's, but a museum is a cheap and unique way to spend the day, and you'll be satisfying a bit of wanderlust, too.

Get lost in the universe at a planetarium or scope out an original Salvador Dali at an art gallery. Just make sure you leave before the dinosaur comes alive.

"Look at the stars, look how they shine for you." Coldplay was right — on New Year's, or really any night for that matter, there will be a sky full of stars waiting just for you.

Grab an astronomy book from a local library or download a constellation app on your phone, and hit the road. Find a quiet spot, with more trees than buildings, and just look up.

Suddenly, your New Year's Eve plans, life problems, and resolutions will be put into perspective. There's nothing like staring at a galaxy to help you get grounded.

Have some snack recipes and specialty drinks from Pinterest you've been dying to try? This is your chance!

Chocolate-covered pretzels and champagne with your besties make for a New Year's Eve well-spent. Watch your favorite chick flicks and feature films from La La Land to the The Little Mermaid, and at midnight, don't forget to tune in to the ball drop!

New Year's Day has unofficially become National Hangover Day, but also National Everyone And Their Mom Will Be At The Gym Day. When the first of January hits, the resolutions begin — and for many people, that means landing a membership at a local fitness club.

So, why not beat the rush? Some people like to follow "new year, new you" mentality. Kick start your new year with some kickboxing and a celebratory smoothie.

Arguably the funnest part of New Year's Eve is getting all dressed up. Putting on a pair of heels, a red lip, and a sparkly dress just makes you feel "so Gatsby," as Taylor Swift says in Reputation, and posting the most visionary picture on Instagram is just something you can't miss.

But, there's no reason why you can't get all dressed up and have nowhere to go. You don't have to break the bank to break the Internet. Rock that red lip, get some glitter and sparklers, and create the perfect backdrop. (I always recommend a blank wall.)

Pose for a Polaroid right at midnight. Your new year is already picture perfect, and you didn't have to spend a penny to do it.