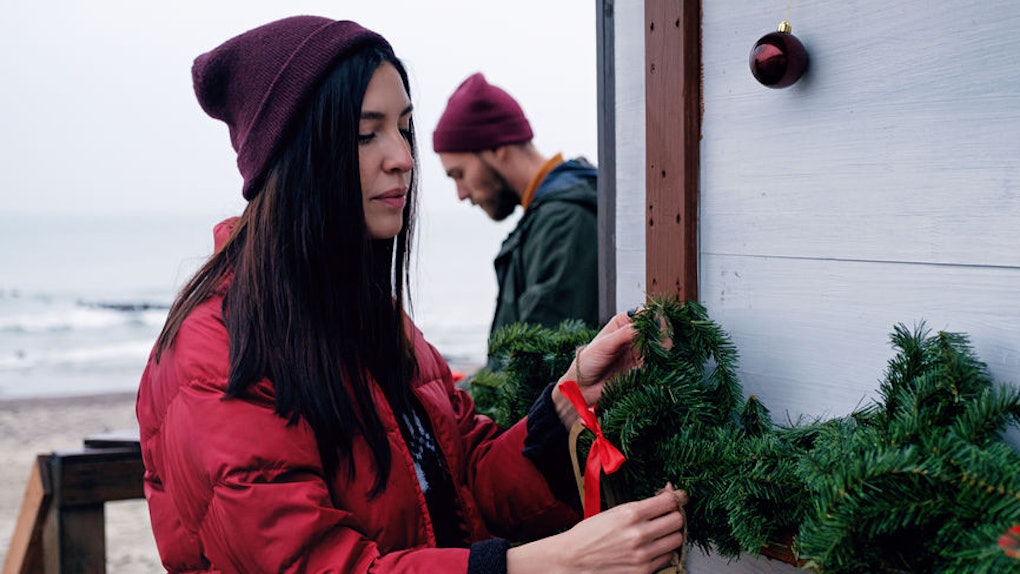 One of the greatest Christmas bops of all-time is about this. George Michael spills all the tea about how he got ghosted "last Christmas." Cue the upbeat synths — and a supercut of Michael looking salty that his crush has moved on to nuzzle red noses with someone else.

The winter holidays are typically seen as a time for togetherness and cheer, best shown through family-bonding and gift-giving. Still, a lot of people's inner Grinch leaps out when it comes to new relationships.

Maybe it's the powdered sugar, Champagne bubbles, and fairy lights that create a mood for fleeting winter romance. Or maybe it's the edgy velvet dresses, tinsel strands, and midnight thrills that create a perfect (snow)storm of slowly fading texts and social media orbiting.

Don't believe me? Pull on your puffer jacket and bundle up! Here are seven chilling ghosting stories. Some are about dating people who probably had a corncob pipe, a button nose, and two eyes made out of coal. Others are about the winter flings that were just downright wack.

A Literary Dream Boy Or F*ckboy In Disguise?

"I went to a new friend's New Year's Eve pregame and met their really cute best guy friend. We hit it off all night — I kind of swooned when he said his New Year's resolution was to only read books by female authors — and made out at midnight. We had the most amazing first date a few days later and kissed goodbye as snow started to fall. The whole thing felt so magical until he started fading out on all my texts and kept dodging my hints that I wanted a second date. I never saw him again."

That's Not Quite What "Slowing Down" Means

"I was ghosted in late 2016 by a guy who I met on a dating app. I fell really hard and liked him so much that I wanted to DTR, but he kept on giving me excuses that didn’t make much sense, like that he was new in town and thought that committing to a relationship would make it harder for him to make friends. I guess I should’ve seen it coming, but we decided to take some space because I told him I would just continue to fall harder for him if we didn’t slow down, and that’s not fair. But I really thought we were just slowing down, not that I would literally never hear from him again. A few days after Christmas, I realized he had unfollowed me on Instagram, so I unfollowed back, but his profile was still public. On New Year's Day, I went to go creep on his profile and noticed he had posted a photo the night before with a new girl at a party, with a caption clearly stating they were dating. So much for not wanting to commit to a relationship."

The Only Gift She Got Was Her Stuff Back

"I was ghosted by my boyfriend of 15 months right before Christmas 2014. Back then, I hadn’t even heard of the term 'ghosting!' I just totally stopped hearing from him. Finally after a week of radio silence I went back on the site where we had initially met and saw that he had reactivated his profile. I confronted him with a text on Dec. 23, basically telling him I wanted my stuff back, and that he should text me a time when he was out of his apartment so I could come get my things. He did, I did, and then I proceeded to spend Christmas Eve and Christmas Day depressed and heartbroken. Ugh."

TFW You Start Thinking: Maybe He Actually Became A Ghost

"I dated a guy for about three months during the holidays. It felt like we were building something. He was interested in meeting the people in my life I cared about — he met my friends and came to my friend's New Year's Eve party with me — and so I let him in. One day, he just stopped answering me. I Googled his name once to make sure he didn't die. Then I moved on. Of course it hurt, but in the end, it means he wasn't a kind enough person for me. And I've made peace with it now."

"We met on Tinder, followed each other on Instagram, and only dated for about a month. So, I was surprised when they invited me to Christmas in the first place? IDK. I got invited to spend Christmas Eve and Christmas with them, during which time I met their brother, mom, and stepdad (who all were so nice to me and def liked me). And then they dumped me over text on New Year's Eve."

And Now, A Word From The Ghost Themselves

"I had been talking with this guy for nine months and it was definitely a non-starter, but he was tall and I liked the attention — so I was just kind of letting it go on. Then, right before the holidays, I realized I was wasting my time and energy and it was time to dip. To be completely honest I didn’t think he’d notice. But then he did in a big way. He pulled the Christmas stunt, tried to invite me on a New Year's Eve trip, and then in the new year, started lurking around my social life (we had a similar social circle). It took me almost a year to fully rid myself of him."

It's Just Not Gonna Work

"I met a guy and we really hit it off, had a lot of similar goals and interests. We went on a date and I thought I really liked him until I realized I only got on for the holidays, he isn't what I was looking for in someone, and he sketched me out. I decided to give it another shot and invited him to a friend's Christmas party. No one liked him so it solidified it for me. I ended up drinking and basically tried to stay away from him all night. I kissed him (a lot) at the door, and he sent me a Snapchat of him singing Sam Hunt's 'Take Your Time' and I never responded... ever again."

And there you have it! Whether it's for yourself or for your best friends, be vigilant against all the spirits that lurk these last few weeks of December.