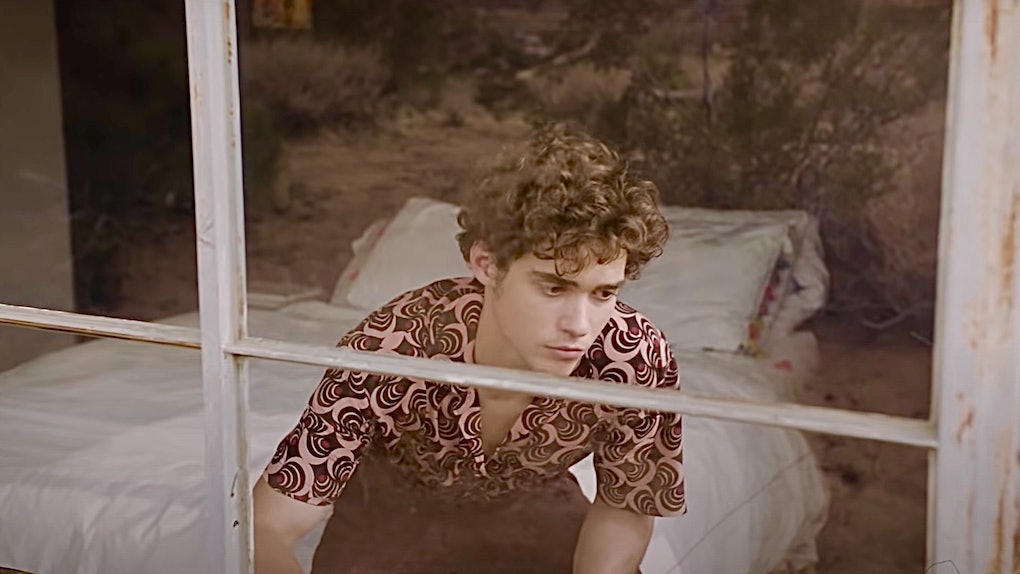 Joshua Bassett's self-titled EP dropped on March 12, 2021, and it's packed with jams and photo shoot #inspo. Every track has romantic and catchy lyrics that'll get stuck in your head, and some even have a dreamy music video that's decked out with pastels and film frames. You'll want to turn on "Lie Lie Lie" or "Heaven Is You," grab your camera, and recreate these Joshua Bassett EP-inspired photo shoot ideas that are "really that good."

After all, taking Joshua Bassett EP-inspired pics is the best way to show your love for the High School Musical: The Musical: The Series actor, and spruce up your Instagram feed for spring. His debut "era" features pinks, light blues, and soft purples that might already remind you of this floral season. They may have the same palette as the flowers in your backyard that are starting to bloom, or a new outfit you bought for the warm days ahead.

You could take these pictures in a collared shirt, similar to the ones that Bassett wears in the video for both "Lie Lie Lie" and "Telling Myself," or in a teal outfit inspired by his "LLL" 'fit to really kick the spring vibes up a notch. Once you have your look picked out, your Joshua Bassett EP-inspired photo shoot can begin. Just don't forget to tag Bassett in the final product so he can see, OK?

1. Snuggle At The Kitchen Table With Your SO

First up is a photo you can recreate with your SO, that's based off the "Telling Myself" music video. In the video, Bassett sits in a restaurant booth with his partner, and they snuggle and chat while enjoying drinks. You can recreate this scene right at your kitchen table, by dimming the lights, sitting close to your love, and touching their face with your hand.

You can put coffee cups on the table, a vase with flowers, and even a fake menu if you want to pretend you're in a restaurant, too. Once you get your shot, be sure to saturate the yellows in it using an editing app like Lightroom or Tezza, to make it look like it was taken at golden hour.

2. Lay On The Ground And Look At A Branch

The album art for Bassett's debut EP shows him laying on top of a car and looking at a blooming branch. He holds the branch over his head, while wearing a lace-covered tee.

To get this shot, pose in a similar position with a flower stem or a branch that may be laying around in your backyard. Have your tripod set up so it's the same height as the hood of your car, and pretend to be in deep thought. Playing the EP in the background isn't necessary, but is recommended.

3. Play Guitar In Front Of A Pink Backdrop

It's no lie, lie, lie that a pink backdrop can stand out on your IG feed. It can make your friends and followers stop scrolling, and leave you a comment like, "This is so sweet," along with a heart eyes emoji. If you already have an Instagram backdrop for your backyard, set it up with a pink sheet, or hang a pink sheet from a sturdy tree.

Grab an acoustic guitar and pose in front of the backdrop for a cute Instagram pic. You can bring other Bassett-inspired props into the shoot, too, like a teddy bear or a HSMTMTS soundtrack.

4. Pose For The Camera While Pressing A Piano Key

Have you seen the poster for Bassett's virtual concert that's on April 16, 2021? It shows the star laying over a piano, pressing a single key down. The photo looks vintage, dusty, and like it was taken on a film or disposable camera.

Recreate this image by posing with a keyboard, or piano if you have one. Press a single key down, while gently smiling at the camera. You can either apply a filter, or just take the photo on a disposable camera and have it developed. If you don't have a keyboard, create a similar scene with your laptop or computer keyboard.

5. Gaze At The Sky With Your Best Friend

A blue sky may be the most underrated backdrop in the books. Don't sleep on the creative possibilities of it any longer, and be sure to head outside with your camera, BFF, and this shot from Bassett's "Telling Myself" video.

To recreate it, you just need to hug your BFF while a self-timer goes off. You'll want to angle your lens up, and look away from it when it goes off. If the wind blows your hair in the moment, consider that a major win.

6. Take A Selfie In A Deep Red Turtleneck

The music video for "Only a Matter of Time," the fourth track on Bassett's EP, is simple but moody. The star sings while he stands on train tracks and wears a deep red turtleneck. Don't rush to find train tracks for this pic, because you can snap it right in your bedroom.

The key is to stand in front of a poster of a national park, or a very earthy place. From there, you'll want to take a selfie in a similar red turtleneck. You can curl your hair, too, if you want to mimic Bassett's signature locks.

7. Stand In Front Of A Car At Sunset

Last but not least, take a note out of the "Lie Lie Lie" playbook, and stand in front your car while wearing a dressy 'fit. Plan to take the picture at sunset, so you can capture the same purple haze from the music video, and look off into the distance.

For this photo, you can either leave your car in a driveway or parking lot, or pull it up so that a green yard is behind it for all the spring vibes.