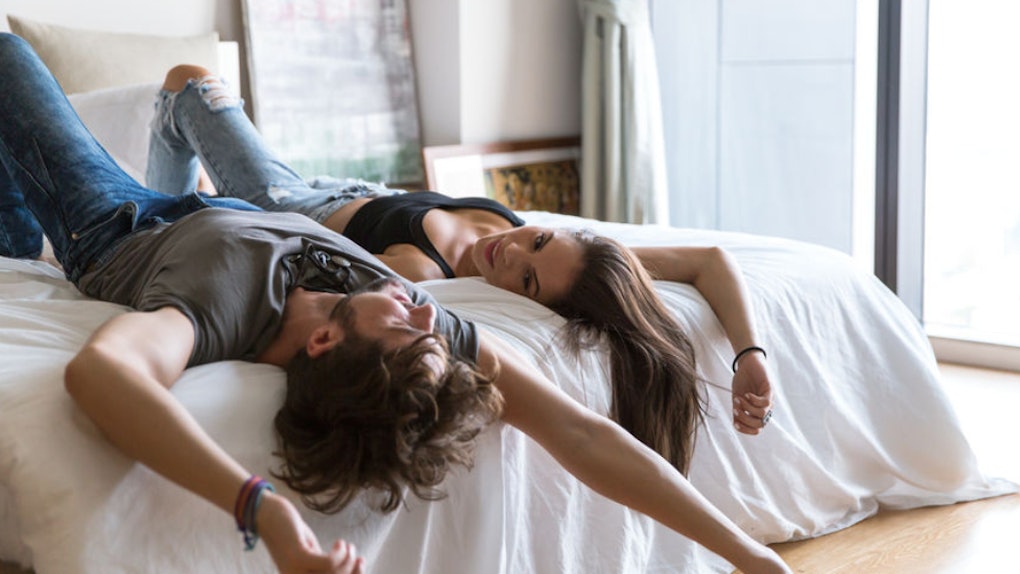 7 Brutally Honest Phases Of Casual Relationships, Because Everyone Has Them

Sometimes casual dating works out perfectly for all people involved, and sometimes, well, our emotions aren't always on our side and feelings can get in the way and complicate things. But that doesn't mean that a casual relationship can't be fun and fulfilling, it just means that you and the people you date need to communicate and be on the same page (just like with any relationship). Casual may not mean making a serious commitment, but it also doesn't mean that you or the people you date can just not factor emotions into it at all — you're all human, after all. And the key to any healthy relationship, no matter how casual or serious, is respect and consideration.

Anyway, whether this is your first foray into the world of casual dating or you're basically a pro at it now, you can probably relate to these phases of being in a casual relationship at one point or another.

1. You realize you're not at a point where you want something serious.

Maybe you just got out of a serious relationship, or maybe, on the other hand, you haven't dated anyone in a while. Either way, you know you're not looking for something serious right now. It feels like even just the thought of committing to another person stresses you out, but that doesn't mean you don't want to go on dates, meet new people and have some fun — and that's totally fine.

2. But you struggle to get the hang of dating multiple people at once.

If you've never been in a position where you're going on multiple dates with multiple different people at once, you're in for a bit of a challenge. Some people can just effortlessly put together a rotation of cool people to date and hook up with and it all totally works for everyone involved, while others struggle to even text the right people back at the right time. Casually dating several people at once comes with a bit of a learning curve, but eventually you figure it out and things start to calm down a little bit and fall into place.

One thing you didn't expect to experience in this casual relationship process? Catching a hint of feelings for one of your dates — and feeling a little bit jealous that you're not in a more committed situation. But you still don't want to be in a committed relationship, right? You try to push the feelings of jealousy aside, but sometimes you struggle with the fact that you can't see this person as often as you'd like to — and that your feelings aren't totally matching up with what you know you want and need right now. Emotions are tricky like that!

4. You start seeing someone more consistently, but it's confusing.

Having feelings for someone you're casually dating — especially when you know deep down that you're not ready for something serious — can be super confusing. You'll know you're in this phase when you've started to accept and move past the jealousy, but you're still not sure how to proceed. You want to keep seeing this person, but you can't really reckon with what that means for you yet. Do you have to commit to them to be with them, or are you happy with things as-is? What about them — do they want the same things as you?

5. You face the internal struggle: To DTR, or not to DTR?

As if you aren't struggling enough with figuring out what you want, now the person you've been seeing wants to talk about where things are going and if you're still on the same page. You go back and forth, internally struggling to figure out if you're down to make things official or not. But, the thing is, even though you've found yourself catching feelings, you know that you're still not interested in anything serious right now, so you ultimately decide to tell your partner that. Honesty is the best policy, after all.

6. Your casual fling starts to fizzle out (or maybe it heats up!).

As with all "So, what are we?" conversations in casual relationships, there are three possible healthy outcomes: 1) You both want to keep things casual and agree to keep seeing each other with that in mind, 2) you both decide you want to commit to something more serious, or 3) one of you wants something serious and the other doesn't, so you decide to end things. As per the last phase, you know where you stand, so what happens next depends on how your partner's feeling. Maybe you keep things going casually, or maybe it's better to stop seeing each other so no one gets hurt, but either way, you need to make a decision together.

7. You realize that everyone does casual relationships differently, and that's OK.

The thing about casual relationships is that, just like full-blown, serious, committed partnerships, they're all different, and everyone wants something a little different out of them. What a casual relationship looks like for you might look totally different to someone else, and that's fine — what's important is that you figure out what works and feels right for you (and that you find a partner, casual or not, that is happy to be on the same page).

And the other important thing? Now that you've been through it once, you know what you need out of your next relationship, no matter how serious it is or not.