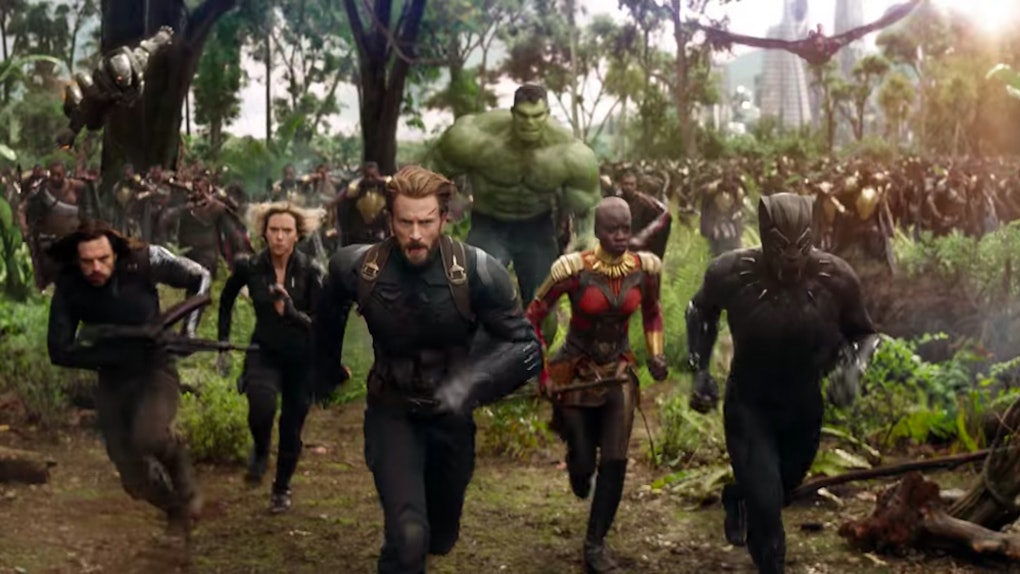 After months of stalling, Marvel has finally released the final trailer for Avengers: Infinity War, and from the looks of things, it's about to go down (not to quote Pitbull or anything). The new trailer sets up a massive battle between the Avengers, their superhero allies, and Thanos, an all-powerful villain trying to steal Infinity Stones and destroy the world. The trailer does a great job explaining this, but there are still a few tiny details in the Avengers: Infinity War trailer that even the most dedicated Marvel fan may have missed. Of course, the studio doesn't want to give too much away in the trailer, but if you're paying attention, you may find a hint or two that answers the film's biggest questions — including which superhero will die in Avengers: Infinity War.

Unsurprisingly, Thanos' adopted daughter Gamora (Zoe Saldana) features prominently in the trailer, as she's the only one who can really explain what the villain wants. "The entire time I knew him, he only ever had one goal. To wipe out half the universe," says Gamora, now a Guardian of the Galaxy. "If he gets all the Infinity Stones he can do it with the snap of his fingers. Just like that," she says. Tony Stark says, "Tell me his name again," and after Gamora answers, it's all Thanos, all the time. The intense trailer moves quickly, only offering glimpses of Thanos' battle with the Avengers, but it's these moments that tell us the most about what to expect in Avengers: Infinity War. Buckle into your hovercrafts, Marvel fans, because it looks like it's going to be a bumpy ride.

In the middle of the trailer, Thanos walks next to a small, green-skinned Zehoberei girl, Gamora. As fans know, the Zehoberei were annihilated by Thanos, but he took mercy on Gamora and chose to adopt her instead. The trailer offers fans a close-up of Gamora's small hand holding Thanos' finger, which would normally be a sweet image in literally any other movie ever. Instead, in Avengers: Infinity War, it's a reminder that Gamora could have been turned evil, and instead managed to become a good guy and join the Guardians of the Galaxy.

At one point in the trailer, fans see Thor (Chris Hemsworth) totally at the mercy of Thanos: his head is about to be smashed by Thanos' huge hand. In Thor: Ragnarok, the Avenger lost his eye to the Goddess of Death Hela, and now, the eye patch-wearing superhero may lose everything. Unless Thor's friends step in to save him, I'm not sure how he's going to get out of this one — he looks pretty stuck in there. It's possible that Thor won't make it out of this fight with Thanos alive, especially considering that we know a major character is going to die in Avengers: Infinity War, and Hemsworth's contract is up after Part 2 of Infinity War. However, if Thor were to die, I have to imagine that it would be with more honor than simply having his head crushed by Thanos.

Is it possible that we'll be saying goodbye to Iron Man, as well? The trailer definitely suggests that Tony Stark (Robert Downey Jr.) will meet his demise. After being surrounded by Thanos' men, Tony Stark is next seen with his armor suit totally shredded, his face and most of his upper body exposed to the villain. Before making a move on the now-vulnerable Iron Man, Thanos says, "I hope they remember you" — a possible easter egg referring to both the Avengers and Marvel fans. Downey Jr.'s Marvel contract is currently up, making it very possible that Thanos' remark has a double meaning.

Man, is anything safe in Avengers: Infinity War? The bulk of the film's battle takes place in Wakanda, the home of Black Panther and his warriors. From the massive explosions, stealth attacks, and burning buildings and plains seen in the trailer, the fight between the Avengers and Thanos will leave Wakanda in ruins — or at least something pretty close to that. That being said, if there's anyone who can rebuild Wakanda, I'm pretty sure it's the Dora Milaje, their amazing female warriors.

Spider-Man may be the only survivor.

As soon as news broke that there was going to be a major Avengers: Infinity War death, fans began speculating that Marvel was going to kill off multiple characters and make a core group of Avengers to rebuild their ranks. In the trailer, fans see the other Avengers on the losing side of a battle with Thanos, but Spider-Man (Tom Holland) never seems super threatened by the villain. At the very end of the trailer, things are blowing up right and left, but Spider-Man is swinging his way through the fiery debris, apparently unharmed and unfazed by the obstacles. His figure is the last thing we see in the trailer, so could this be an indication that he's the only one — or one of few — who make it out unharmed?

Thanos already has at least two of the six Infinity Stones.

Towards the end of the trailer, Thanos crushes a Tesseract and releases the Space Stone, the Infinity Stone that allows for interdimensional travel. Later, when Thanos attacks Captain America (Chris Evans), he has another Infinity Stone: the purple Power Stone. The Power Stone can produce massive blasts, explosions, and other energy-harnessing forces of destruction, so it's no surprise that once Thanos has it, defeating him becomes a near-impossible task. Can the Avengers defeat him with the remaining four Infinity Stones? We'll have to watch to find out.

More like this
The 'Zola' Movie Trailer Will Have You Reliving The Iconic Twitter Story
By Dylan Kickham
This Video Of Disneyland's Marvel's Avengers Campus Is Super
By Cianna Garrison
'Thor: Love & Thunder' Cast, Plot Details, Premiere Date, & More
By Ani Bundel
Stay up to date