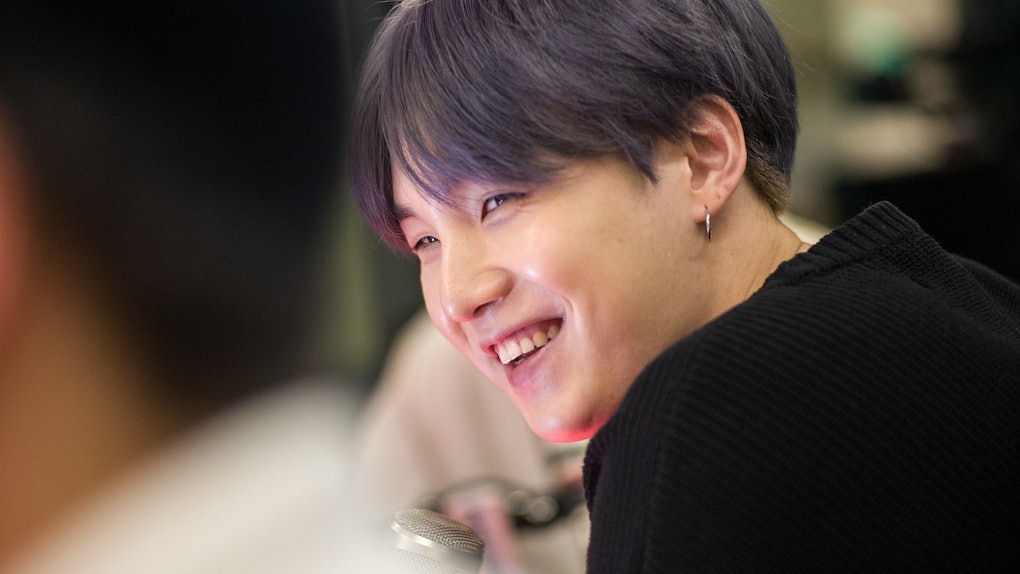 6 Times Suga Told BTS He Loves Them, Because He’s Actually A Huge Softie

When some people think about BTS' Min Yoongi, aka Suga, the first word that comes to mind may be intense, or even intimidating. He is, after all, a super hardworking musician and producer, and has more talent in his pinky finger than I have in my entire body. Despite his tough exterior, though, I have a hypothesis: I'm 100% certain that Suga is actually a total softie. And I plan to prove this by showing you all of the times Suga has told BTS members he loves them.

I'm definitely not the first to point out Suga's under-recognized softer side, because the BTS ARMY has been onto him for some time. (I mean, come on, guys. ARMYs didn't give him the nickname "Lil Meow Meow" for nothing.) And even RM, Jin, J-Hope, Jimin, V, and Jungkook have brought attention to Suga's low-key affectionate nature.

Besides the ARMY, there's maybe no one Suga loves more than the other members of BTS. Makes sense, considering he's known them for so long and they've become like brothers to him. If you don't believe me, hear me out — here are six times Suga told BTS he loves them, whether he used those coveted three words or took a different approach.

OK, so they didn't actually say the three words to each other. But RM and Suga, two of the more reserved members in BTS, hugged it out and shed a few tears together (at around 17:40 in the video above) after BTS won Artist of the Year at 2016's MAMA, or M-Net Asian Music Awards. They didn't need to say "I love you" for anyone to understand that's what they meant.

This was also not an official "I love you," but calling someone your "soul partner" comes pretty damn close, doesn't it? Suga tweeted this photo of J-Hope in a wig to wish him a happy birthday in 2017. According to a fan translation tweeted by @ThrowbacksBTS, the caption translates to, "The mom of Yoonji’s house #ThisIsSugaHyung #HobiHappyBday #SoulPartner #Sope #IfSugasTheLeaderItsSope #IfJHopesTheLeaderItsHote."

"Yoonji" is, of course, a reference to that iconic episode of Run BTS! in which Suga transformed into his female alter-ego Min Yoonji. "Sope" is also Suga and J-Hope's "ship name," so clearly Suga thinks of J-Hope as his partner in crime, even if he's joking around.

During the 2018 FESTA Bangtan Dinner Party, V revealed — to everyone's shock and Suga's adorable embarrassment — that Suga once sent him a heartfelt text which ended with an "I love you." Check the moment out at around 29:06 in the video above.

As if that wasn't enough to have you in your feelings, Jungkook jumped in to announce that he also received an "I love you" text from Suga. Meanwhile, Jin kept claiming that Suga barely ever texts him at all. (It's OK, Jin. He still loves you.)

The sweet moment is topped off by the other members teasing Suga and begging to get the same treatment as V and Jungkook. When Jimin joked that hearing "I love you" from Suga would give him strength, Suga didn't even hesitate to say it despite his obvious mortification. I swear, you guys, he's just a giant marshmallow on the inside.

According to ARMY's English translations of the little moment at 14:54 in this behind-the-scenes look at BTS' performance at the 2018 Melon Music Awards, Suga asks Jimin, "I told you I love you, right, Jimin-ah?" to which Jimin answers yes. And while we can't see Jimin's reaction because he's offscreen, please scream with me about the bashful little smile Suga gets afterward.

Suga went live to celebrate his 26th birthday in March 2019, and V swung by his studio to say happy birthday... and "I love you." When Suga wouldn't say it back, V told him he wasn't leaving until he heard him say it, which is honestly the perfect amount of extra and I would expect nothing less from him. Suga eventually told him he loved him — twice! — and even if it was under his breath and mostly as an attempt to get V to leave, there's no hiding how flustered he was.

6. To all the members during the 2019 FESTA Bangtan Attic:

It seems like Suga's been more open about his loving nature lately, if the 2019 FESTA Bangtan Attic video is anything to go by. Their discussion ended with declarations of love from all of the members, which is seriously so adorable. When Jimin pointed out that Suga hadn't joined in yet (at around 50:52 in the video above), Suga began rapping "I love you" over and over to make it clear that he's just as sweet as the rest of them. Now that's what I call growth.

So there you have it: Suga may look super cool on the outside, but he's totally warm and fuzzy on the inside — at least when it comes to BTS, that is. The only thing I'm wondering now is when it will be my turn to hear Suga tell me he loves me. A girl can dream...

More like this
This Theory About The Songs In BTS' "Butter" Concept Videos Will Blow ARMYs' Minds
By Michele Mendez
Will Sandra Oh Return To 'Grey's Anatomy'? Here's What She Said
By Dylan Kickham
Juliette Porter Teases 'Siesta Key' Season 4 Drama — EXCLUSIVE
By Rachel Varina
Stay up to date