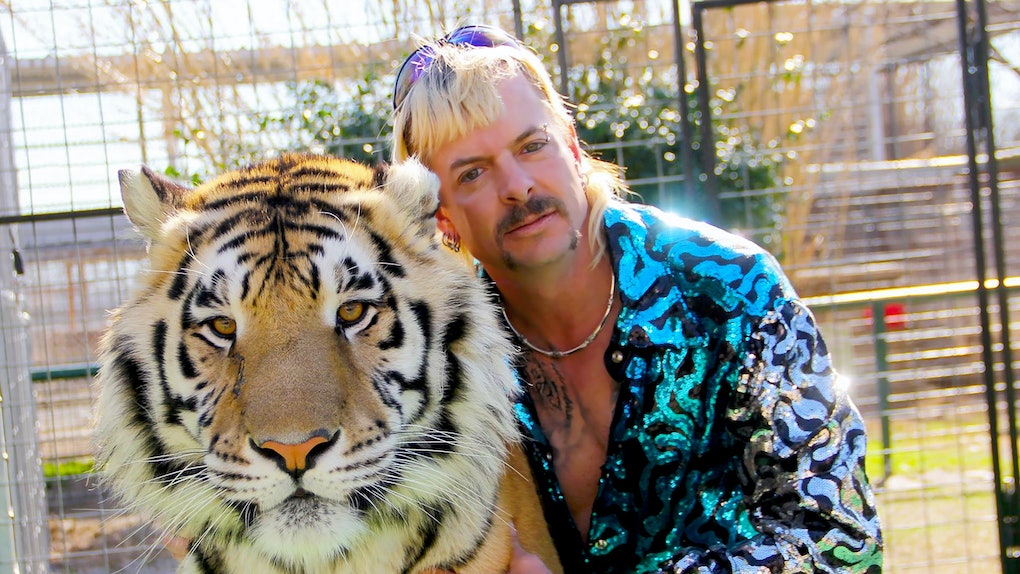 The year 2020 will be remembered for a lot of things, but none captivated America quite like Netflix's Tiger King. The docuseries debuted in March 2020, and its cast of real-life characters became instant celebrities. If you're looking for a pop culture Halloween costume that captures all the wildness of 2020, then look no further than the cast of Tiger King for inspiration. These Tiger King Halloween costumes will be the hit this year, whether you choose to dress as Joe Exotic, Carole Baskin, or any of the other cool cats and kittens who showed up on screen.

Tiger King is the phenomenon it is thanks to its eccentric cast, so it makes perfect sense to pay tribute to them through your Halloween costumes this year. Luckily, there are plenty of Tiger King costume choices to explore. Halloween may look a bit different this year thanks to social distancing measures, but that doesn't mean you can't still dress up as you favorites from Tiger King. In fact, you can celebrate at home with a rewatch of the Netflix series while gearing up for one of the many upcoming retellings of the story.

Tiger King has quite the large cast, so here are six narrowed-down Tiger King costume ideas that'll be the real cat's meow:

The Tiger King himself, Joe Exotic is at the center of all things Tiger King, so if you're doing a Tiger King-inspired costume, Joe's an obvious choice. He's got such a distinctive look, it's pretty easy to pick out a few key details and mimic them for the perfect costume.

First, you need a button-down shirt so bright you could make a highlighter out of it.

Joe is never seen with out a gigantic, shiny belt buckle, so get one of those too.

Most people don't rock a mullet these days, so you'll need to grab a wig if you want to rock Joe's look.

And if you don't have your own facial hair, you'll need to get a fake 'stache worthy of Joe.

Carole Baskin and Joe Exotic are embroiled in what has quickly become one of the 21st century's most iconic rivalries, making the two of them a super-memorable couples costume. But even on her own, Carole Baskin makes a for a great Halloween getup. Since she seems to exclusively wear animal print and flower crowns, it's easy to mimic her daily look.

Her favorite style seems to be a long and flowy dress.

Of course, she's rarely seen without her signature flower crown.

If you don't have long blonde hair, this wig will complete your Baskin look.

Doc Antle, the owner and face of big cat zoo Myrtle Beach Safari, is another rival of Joe Exotic. He's also another member of the Tiger King cast who rocks a very memorable look. Here's what you need to replicate it, multiple wives and girlfriends not included.

This wig is step one. Step two is pulling the hair tight into Antle's iconic low ponytail.

Since Doc runs a "safari," of course he wears a safari hat.

Rick Kirkham is the producer who's partly responsible for giving Joe Exotic the platform to become the star he is today. In a way, there would be no Tiger King without Kirkham. Audiences see him mostly in just one outfit for the whole series, so his look is pretty easy to replicate.

If you want to channel a true Tiger King couple costume, then this is your pick. Lowe took over Joe Exotic's zoo, and he and his wife now have plans to star in their own reality show. They're often seen in matching outfits.

...and he perches his sunglasses on the brim.

Both Lowe and Dropla love a good flannel.

What would Tiger King be without the tigers themselves? You can dress up as the true stars of the series easily this Halloween.

This top lets you rock some tiger stripes.

A set of ears and a tail complete the roaringly good look.

Whether you feel aligned with the big cats themselves, or you're more of a feline monarch, these costumes channel the true wildness of 2020.