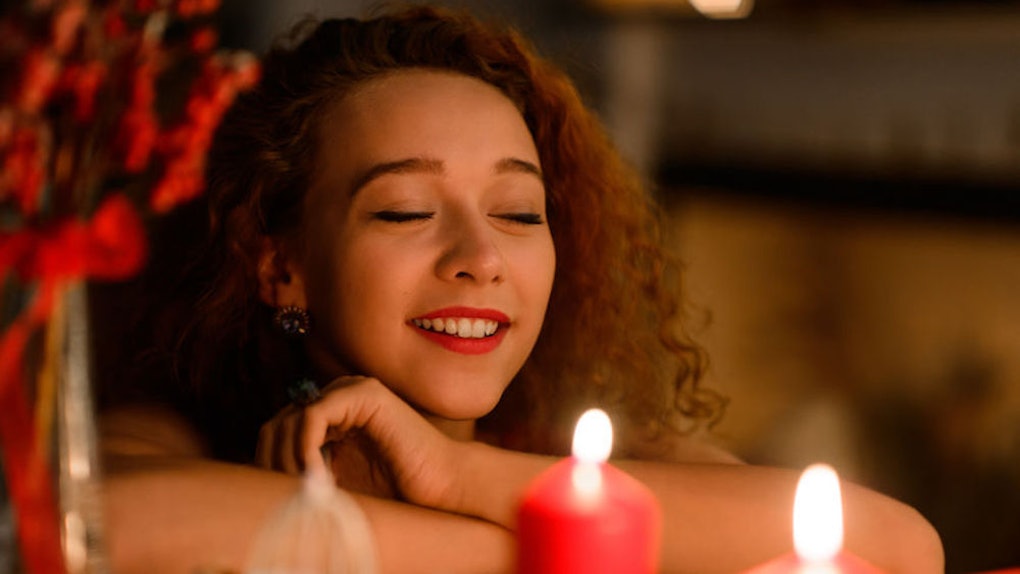 6 Thanksgiving Foods That Make You Tired After The Feast Is Over, According To An Expert

Look, I'm not going to pass up the chance to eat my favorite Thanksgiving foods, even if they have the potential to send me into a mega napping session. I care too much about the traditions, the amazing flavors, and the time spent catching up with family to worry about which Thanksgiving foods make you tired, and whether or not a slice of pumpkin pie will cause me to pass out on the coffee table. But if you're looking to reduce your post-meal sleepiness a little on Nov. 22, you could always make a point to only eat as much as you're truly hungry for, and save some leftovers for the next time you're feeling peckish.

"To some extent," Kim Yawitz, a registered dietitian/nutritionist in private practice in St. Louis, Missouri, tells Elite Daily in an email, "drowsiness from turkey, carbohydrates, and other foods can be minimized by eating in moderation."

But listen: If you want to go all out on Thanksgiving and feast until you simply can't eat another bite, more power to you, girl. A different strategy to keep yourself from dozing off in the middle of a conversation with your cousins might be to simply get up and move around a little. "One of the best things you can do is to get moving, ideally within 30 minutes of your meal," Yawitz suggests. "This will help lower blood sugar, aid in digestion, and get the blood flowing. Volunteer for dish duty, or suggest a 15-minute group walk after your meal." And hey, once your food has had a chance to settle in your belly, you might even have room for one last slice of pie.

You might be quick to blame turkey for your marathon nap after the big meal, but according to Yawitz, it probably isn't the main culprit behind your sleepiness. While the meat does contain an amino acid called L-tryptophan — which, she tells Elite Daily, breaks down in your body to the sleep-inducing chemicals melatonin and serotonin — "turkey is no higher in tryptophan than many other foods we eat, including cheese and other types of meat." So, if turkey were to blame, Yawitz explains, "we’d get tired after eating other protein-rich meals as well."

Having said all of that, here are a few of the Thanksgiving foods to watch out for if you'd like to stay alert and energized throughout the holiday festivities.

Asparagus i one potential culprit

I'm a huge fan of asparagus because of its light, almost creamy flavor. So whenever I see a dish of sautéed stalks on the table during Thanksgiving, my mouth immediately starts watering.

If you can relate to my asparagus obsession, just keep in mind that, according to Health, the green veggie is rich in folate, a vitamin that can make you sleepy if you ingest a lot of it at once, as per Everyday Health.

Watch out for walnuts

On those nights when it seems almost impossible to drift off, you might have tried taking a melatonin supplement to help balance out your sleep cycle. The naturally occurring melatonin in walnuts can have a similarly significant effect on your body, according to a study published in the medical journal Nutrition. You might think that pecans are the main nuts at a Thanksgiving feast, but from green beans to sweet potato casserole, you're likely to find walnuts in a number of dishes on the holiday as well, so just keep in mind that those little guys could make you a little sleepy.

Keep an eye on the collard greens

Since I grew up in the south, my Thanksgiving celebrations have pretty much always been synonymous with a pot full of collards simmered in bacon fat. According to MedlinePlus.gov, dark leafy greens are one of the biggest sources of magnesium, a mineral that can naturally make you sleepy, so don't be surprised if you're struggling to stay awake after a plate full of these veggies.

Red wine will have you down for the count

"Many of us have a drink or two with Thanksgiving dinner," says Yawitz, but according to the dietitian/nutritionist, even a little bit of alcohol has the potential to make you extra drowsy. "Alcohol slows down activity in certain brain receptors and makes us feel more relaxed," she explains, "so a carb-rich meal with a couple of drinks is a one-two punch when it comes to sleepiness."

There are very few foods I love more in this world than freshly baked bread, so one of my favorite parts of a Thanksgiving feast is loading up on those super soft dinner rolls that seem to be perpetually passed around. According to Yawitz, these little guys are unexpected culprits when it comes to making you sleepy. "There’s a big spike in a hormone called insulin — which takes up sugar in the blood — after a carb-rich meal," she tells Elite Daily.

These carb-y treats don't just contribute to your drowsiness on their own, though. They can actually make your body react more strongly to that sleep-inducing tryptophan, Yawitz says. "Insulin also decreases levels of amino acids in the blood relative to tryptophan, which means more tryptophan gets to the brain and more serotonin is released," she explains.

Pumpkin pie will probably make you pass out real hard

Whenever I think of the words "pumpkin pie," they are always accompanied by a host of trumpets in my head — the dessert is just that good, IMO.

But yes, too much of this heavenly delight could potentially trigger some sleepy feels. "Foods higher in simple sugars, like pies, can trigger greater insulin release and possibly increase drowsiness," says Yawitz.

There is a spot of hope, however; according to Yawitz, the name of the game is to eat the dessert in moderation. But, honestly, if you want to eat as much pie as your stomach can take, and pass out on the couch immediately after the fact, who am I to judge?