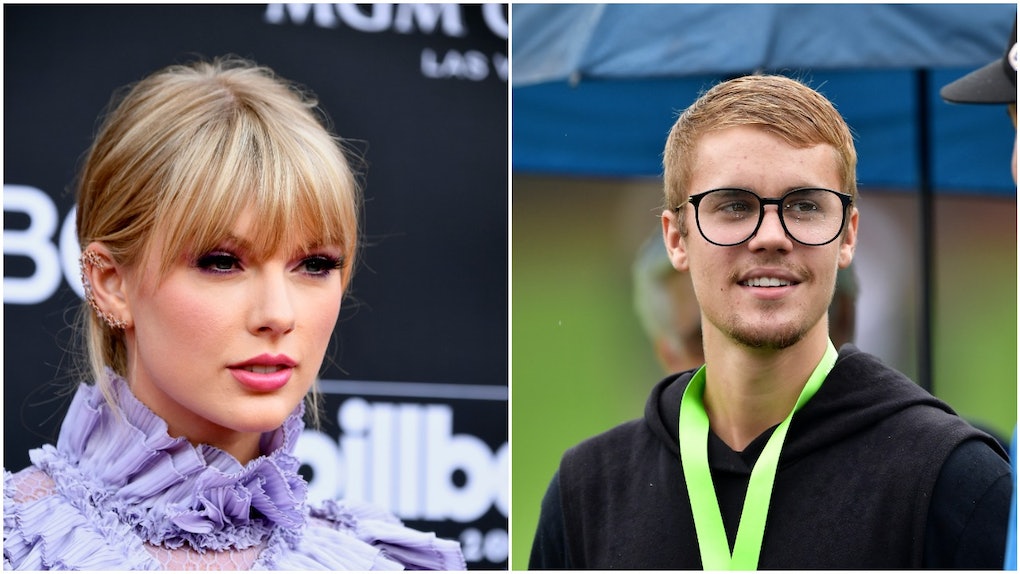 Celebrity friendships always look like so much fun... until they don't. Relationships that once looked secure at high-profile events and award shows can quickly turn into very, very awkward encounters because Hollywood isn't as big as it seems. Narrow down Tinsel Town to a specific group of top-talent creatives, and that microcosm of A-list talent gets infinitely smaller. For example, now that Taylor Swift and Justin Bieber are publicly at odds with one another, I can only imagine how awko-taco it's got to be for their mutual friends. These people Taylor Swift and Justin Bieber have in common probably make this ongoing feud that much more uncomfortable.

He is the reason for Swift and Bieber's current feud. Braun is the high-profile music manager behind some of your favorite artists, including Ariana Grande, Demi Lovato, and Justin Bieber. In fact, he's been Bieber's manager for his entire career. So, naturally, when Swift called Braun an "incessant, manipulative bully" after learning he gained ownership of her entire music catalog by acquiring Big Machine Records, Bieber had some words for her.

First, he called out Swift for posting her angry letter to her Tumblr account and questioned her true motives behind doing so.

"For you to take it to social media and get people to hate on scooter isn’t fair,” Bieber wrote in an Instagram post. “What were you trying to accomplish by posting that blog? Seems to me like it was to get sympathy u also knew that in posting that your fans would go and bully Scooter."

Bieber wrapped by saying he wanted the best for Swift, before telling her she had crossed the line. "I usually don’t rebuttal things like this but when you try and deface someone I loves character thats crossing a line.." he wrote on Instagram.

The music video Swift is referring to is West's June 2016 track "Famous," in which he featured naked wax figures of prominent celebrities in bed with him. Lyrics to the song also include a specific line about Swift: "I feel like me and Taylor might still have sex / Why? I made that b*tch famous."

Tay Tay was reportedly outraged by it all, but Kardashian and West were outraged by her outrage. They claimed she approved the lyrics and leaked a video that appeared to confirm that. In it, Swift can be heard saying she felt the lyrical nod was a "compliment" and even thanked him for asking for her permission. But in a statement addressing Kardashian's leaked audio, Switch maintained that she never approved the word "b*tch."

For anyone who is still not all caught up, the "Famous" lyrics allude to the infamous moment at the 2009 MTV Video Music Awards when West interrupted Swift's acceptance speech to say Beyoncé should have won the award for Best Female Video. Before the release of "Famous," Swift and West seemed to be moving past the 2009 awards show drama and onto better terms, but obviously the drama surrounding "Famous" only added more fuel to what looked like dwindling fire.

Clearly, Swift is not a fan of West or anyone who is Team West, which Bieber seems to be a member of.

Selena Gomez has got to be the singular person who makes this triangle that much more complicated. The "Taki Taki" singer has been Swift's bestie since 2008. That's a long-ass time. Gomez even said Swift is "like [her] big sister" during an Instagram Live in September 2018.

The connection here is Gomez is Bieber's ex. The two dated off-and-on from 2008 to 2018 so you know there's a lot of history there. During the early years, the three pop stars were often spotted on the awards show circuit together, like at the 2011 Teen Choice Awards where Selena performed her hit track "Love You Like A Love Song." BFF Swift and her then-boyfriend Bieber can be spotted dancing together in the audience at the 1:23 mark.

Jelena's relationship hit a snag at some point after that, driving Swift and Bieber further apart. I can only imagine how much more awkward things got for Swift when Jelena reunited and dated for a few months from January to March 2018 — and that's after Bieber "bullied" Swift on Instagram.

Despite the ups and downs of Jelena's relationship, Swift and Gomez's friendship seems to remain tighter than ever. In January 2019, the super busy ladies even made time for a wine night with fellow gal pal Cazzie David. See, best friends forever!

The Biebs and Ed Sheeran dropped the song of summer 2019 with their collab "I Don't Care." In the video, the two singers look to be having an amazing time as they goof off in front of a green screen together. The pop singers are obviously friends, as this is the third project they've worked together on since Bieber's 2015 track "Love Yourself" (the song was originally written by Sheeran for his own 2017 album Divide). Their second collaboration was on "Cold Water" which was written by Sheeran and produced by Major Lazer, with Bieber and MØ on vocals.

Bieber and Sheeran's apparent friendship may be awkward for Swift, seeing as she's also very close with Sheeran, and has been since 2012. Swift and Sheeran began writing music together that year, which resulted in their collab, "Everything Has Changed," on Swift's RED album. They've performed together dozens of times, so it's not surprising that Sheeran's Instagram comments are filled with fans begging him to speak out on Swift's behalf.

After remaining silent for a few days, he finally responded to a fan, writing, "I've been speaking directly to her, like I always do." However, some fans are still pleading with him to speak out publicly on the matter. Seriously, his comments section is in ruins and Swifties are not letting up. As one fan wrote, "@edsheeran SPEAK UP!!! for taylor, and for all of the other artists in the industry who fall victims to the same vindictive and unfair treatment. you write your music, you should understand! staying quiet isn't going to do anything."

Sheeran has yet to release a statement directly addressing his friends' beef.

It's probably obvious at this point, but Swift is not on the best terms with the Kardashian-Jenner clan.

In July 2016, Kendall Jenner, who is close friends with both Bieber and his wife, Hailey Baldwin, publicly sided with her sister Kim despite running in the same circles as Swift's "squad," which was heavily populated by her supermodel contemporaries. She quietly liked a series of tweets that supported Kardashian after she leaked the recording of Swift and West's phone call discussing "Famous." One tweet she liked said, "Kim is a savage! Dont f*ck with her man hunni #KUWTK" and another said, "The Kardashians/Jenners literally all stand up for each other and it's beautiful."

So, how does this connect to Bieber? Well, he's been a longtime pal of the Kardashian and Jenner sisters. Remember that photo shoot he took with Kim in the Bahamas in 2010? He also partied it up with Kendall at Coachella in April 2015. Then, there's the fact that his wife is super tight with Kendall, making the feud kind of an extended family affair.

Hailey Baldwin defended her husband at all costs in the midst of Braun's beef with Swift.

Though, a closer look at Hailey's relationship with T. Swift seems to reveal she was never a fan of the pop star to begin with. Despite the pair sharing mutual supermodel friends like Karlie Kloss, Gigi Hadid, Cara Delevingne, Hailey publicly shaded Swift and her squad mentality in December 2016. "I don’t know what having a squad means," she told Yahoo. "I don't understand the Taylor Swift squad at all. I just have my friends and that’s it. I don’t think that you need to create a public squad. I don’t know what that proves." Yep, not a fan.

In August 2017, she also liked an Instagram photo that asked how much someone was willing to be paid to smack Swift. While the original post offered a whopping $835 billion, Bieber liked the rebuttal that accepted the low low price equivalent of a sweet tea from McDonald's. Ouch! Safe to say, there's no love lost between Baldwin and Swift.

As you can see, this beef is very juicy, very tough, and seriously convoluted. There are a ton of parties involved, essentially the entire music and A-list pop industry as a whole. Honestly, only time will tell how this is going to pan out. I'm just hoping for the best for all parties (and their music) involved.