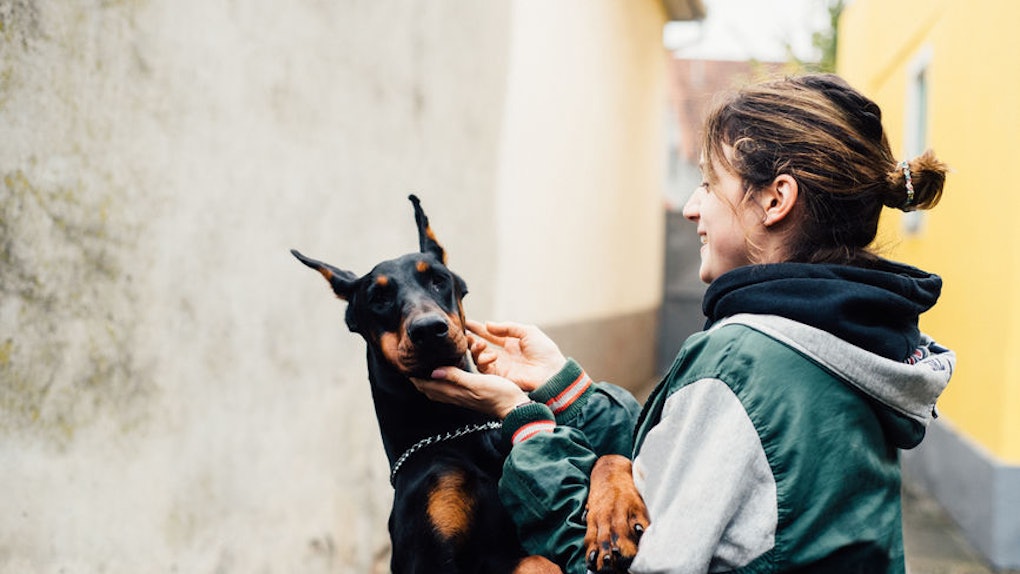 5 Workouts You Can Do With Your Dog If Your Fur Baby's Into Fitness, Too

After a long day at work or school, sometimes you'd much rather sit inside cuddling with your pet than follow through with that workout class you booked weeks ago, you know? Like, why would you go to a cycling class when you and your darling Dalmatian can just chill and spend some QT together? Well listen, I'm here to tell you that you can do both at the same time, with no need to make that very difficult decision between the two. According to personal trainers, you can work out with your dog, my friends, so enjoying their company and getting your sweat on don't have to be mutually exclusive.

As Rover.com reports in its survey about dog owners, owning a pet increases your physical activity by a whopping 69 percent, just by sheer way of having a furry pal in the first place, and all the things you have to do to take care of them. So really, adding a little more movement into your pet-care routine just takes some creativity and an open mind. Plus, you know who's probably going to be most excited about trying some new moves and all that extra exercise? Your precious little fur baby.

So, if you want to try working out with your dog, here are some paw-sitively adorable suggestions from personal trainers for how to do it.

Carry Your Pup When They're Too Tired To Walk

David de Ponte Lira, a fitness coach and founder of FullMusculo, tells Elite Daily over email that his dog can be a rather lazy exercise companion, so whenever the two of them go out for a walk, he often ends up carrying his pup in his arms on their way back home, because halfway along the route, he usually gets tired and lies down on the ground to rest.

While this is pretty adorable and hilarious, the coach tells me he can't deny that this adds some extra intensity to the overall activity — for him, at least. If you have a small enough dog that you can pick up — or heck, even a cat — why not power-walk a little with your munchkin held tight in your arms?

According to Anne Appleby, a yoga teacher in San Francisco and founder of YogaForce, doing yoga with your dog is totally possible, not to mention good for their health. "If you like yoga, chances are your dog will like it, too," she tells Elite Daily over email. "As a matter of fact, when your dog wakes up in the morning or after a long nap, most likely he/she does downward facing dog first thing, often immediately followed by upward facing dog."

While there are many positions you can look up and train your pet to do, Appleby gives happy baby pose as an example of something both you and your dog can do together. "The dog is on his/her back with the paws in the air. The spine is relaxed into the floor. This is a hip-opener," says Appleby. "Both dogs and human babies do this often; it is relaxing!" Pro tip: You might want to rub your pup's tummy during this, the yoga teacher suggests. Uh, you don't have to tell me twice.

Take The Long Way On Your Walk

Nothing could be simpler, right? But the truth is, your pups often don't get enough exercise as it is, so rather than just letting them out to do their business, go outside with them for a real walk, and don't forget to take the long way home.

According to animal communicator and healer Blaire, known as The Love Guru, it's important that your dog has opportunities for walks that are longer than running outside in the yard or down the street and back. Plus, she suggests, you can use this time to get in some exercise and some mindfulness practice. "Go for a nice walk, practice taking deep breaths and releasing stress from the day, look around at your surroundings, and relax while your dog explores the area," she tells Elite Daily. "It's OK to do a power-walk, but also make sure to give your dog a mix of leisure, as your dog really loves to smell and explore everything along its path."

Take "Catch" To The Next Level With Some Running Bursts

Karena Dawn and Katrina Scott, the trainers behind Tone It Up, tell Elite Daily over email that simply jogging or running for 15 to 20 minutes during your morning walk is a great way to get some cardio in.

But beyond that, bringing a game of catch into a larger outdoor area can ensure you get a little more movement in. Even if your energy levels are running a bit low, tossing a ball around and jogging alongside your dog can give you just the motivation you need.

Add Some Squats To Your Dog Walk

According to the Tone It Up trainers, adding some moves to your morning or evening dog-walk can provide both of you with a seriously fun and intense workout. While holding onto the dog leash and adding mountain climbers and squats are among the trainers' suggestions, a move called "doggie chops" is particularly fun for those who have smaller dogs, because you can hold onto them with both hands for added weight.

"Begin standing with legs shoulder-width apart, pooch held up at the level of your chest," Dawn and Scott explain. "Squat down and twist your upper body to the right, keeping your pooch at chest height. Straighten your legs, and lift and extend your pup to the left. Slowly lower back to start."

Complete 12 reps of those movements, and you'll be feeling the burn (or should I say, bark?) in no time.