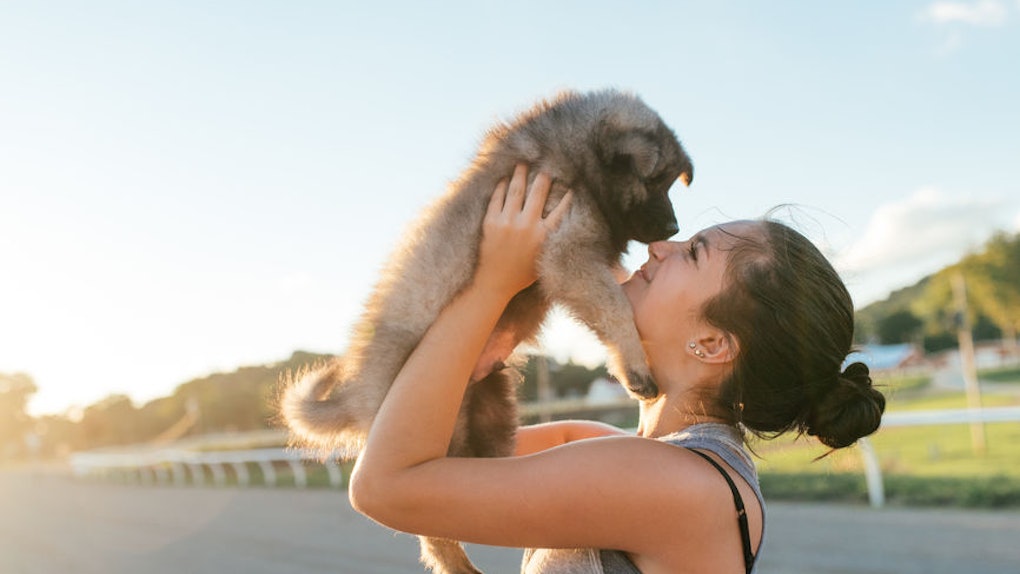 Does Walking Your Dog Count As Exercise? Science Says Strolling With Your Pup Is Great Cardio

If the mere thought of running sprints on a treadmill or pedaling to nowhere on a stationary bike makes you want to gag, then listen up #TeamCardiNo, because I have news for you: Let’s say you’re strolling through your neighborhood at least once a day with that ah-dorable pup of yours. You walk around the block once, maybe twice, and suddenly your smartwatch sounds, congratulating you on meeting your fitness goals for the day. Confused? Don’t be. According to new research, that wearable tech isn’t malfunctioning: Walking your dog does count as exercise, so stop thinking of taking your dog out as a chore, and instead, think of it as a multipurpose task that allows you to work up a sweat, your pup to take a poop, and the both of you to bond. Can endurance really get any better than that? I’m not so sure it can.

Maybe you’ve come across an article or two of mine where I mention my beautiful fur baby, Aria, a tabby cat. I wouldn’t get very far trying to walk her, obviously, but once upon a time, my family and I had a brilliant dog named Maggie. Maggie was a chow-lab mix, weighed about 60 pounds, and the only memory I have of walking her is that, basically, I put her on a leash and she walked me halfway up the street before deciding the concrete jungle just wasn’t for her: She laid down in the middle of the sidewalk as her way of telling me it was time to go home. At the time, I wasn’t a fan of cardio either, so I couldn’t blame her, but if you have a furry friend who loves going for long walks, science says you’re in luck.

According to a recent study, walking your dog definitely counts as exercise, meaning you now have a much more enjoyable way to clock in some cardio, sans treadmill.

If you ask me, nothing compares to the companionship between a dog and its owner, and taking your pup out for regular walks is an excellent way to keep that bond going strong. Plus, you know what they say about endorphins, right? See, the more active you are, the better you feel: That release of endorphins helps fight off the initial feelings of physical stress that your body associates with exercise. Combine that with the pure bliss that is palling around with a pup, and it’s no wonder walking a dog is an enjoyable form of exercise.

Interestingly enough, though, a lot of people who own dogs don’t take them out for walks, which is exactly why Katie Becofsky, a dog owner and professor of kinesiology at the University of Massachusetts in Amherst, set out to explore if walking your dog counts as exercise. To begin, The New York Times reports Becofsky and her team invited 30 dog owners to join an "obedience class" that would train their pups to be well-behaved on a leash. The participants were told to log their walks, wear an activity monitor, and note any additional activity six weeks after the program. Unfortunately, weather proved to be an issue, so while participants did stick to the scheduled walks of the course, there wasn’t a whole lot of extra walking going on.

To explore Becofsky’s hypothesis a bit further, researchers at East Carolina University in Greenville, North Carolina, created a physical education course for college students that allowed them to volunteer at an animal shelter for class credit. Students would visit the shelter twice a week for 50 minutes and take a dog for a walk in a nearby park. As a result, the study participants ended up walking roughly 4,500 steps per session, and they noted that the time completely flew by, not only because they were having fun, but because the dog was, too. Melanie Sartore-Baldwin, a professor at East Carolina University who led the study, told The New York Times,

They told us that the dogs had seemed so happy about the walks, which had made them feel better about themselves and the whole experience.

There’s something very appealing about spending time with a dog who is so delighted to see you, and getting in an easy 4,500 steps before 10 a.m.

In other words, walking your dog is physically, mentally, and emotionally beneficial for both you and your pup.

I know myself, and when I first started out on my own fitness journey, I only associated cardio with high-intensity training such as running, sprinting, biking, etc., but according to certified trainer and fitness personality Katie Austin, cardio is just the act of moving your body enough that your heart rate picks up. In other words, walking totally counts.

“A lot of people underestimate the value of walking on your body,” Austin tells Elite Daily, especially because it’s low impact, she explains. Still, she adds, “[walking] is a great form of cardio that isn’t so hard on your body and knees like running.” And especially when you add a dog into the mix, Austin says, you’re not only getting your legs moving, you also have to kick your stamina into high gear if you’re keeping up with a pup who tends to be on the speedier side.

On top of the obvious physical benefits you're bound to reap by walking your dog on the reg, taking a stroll with a furry friend is going to offer up some amazing mental, as well as emotional benefits, too. For example, think about when you take a walk around the park with a friend or loved one: You walk, you talk, you take in the scenery together. It's not just a form of exercise; it's an experience. Through these moments, you and your pup are forming a bond, and walking mindfully together isn't just going to get your steps in for the day; that one-on-one time is going to strengthen the relationship you share with your pet.

So while it's pretty awesome that walking your dog counts as exercise, it's even more awesome that you can use this fun fact to borrow your best friend's pup and go for a long stroll... to your apartment... and never come back. Just kidding. Happy walking!