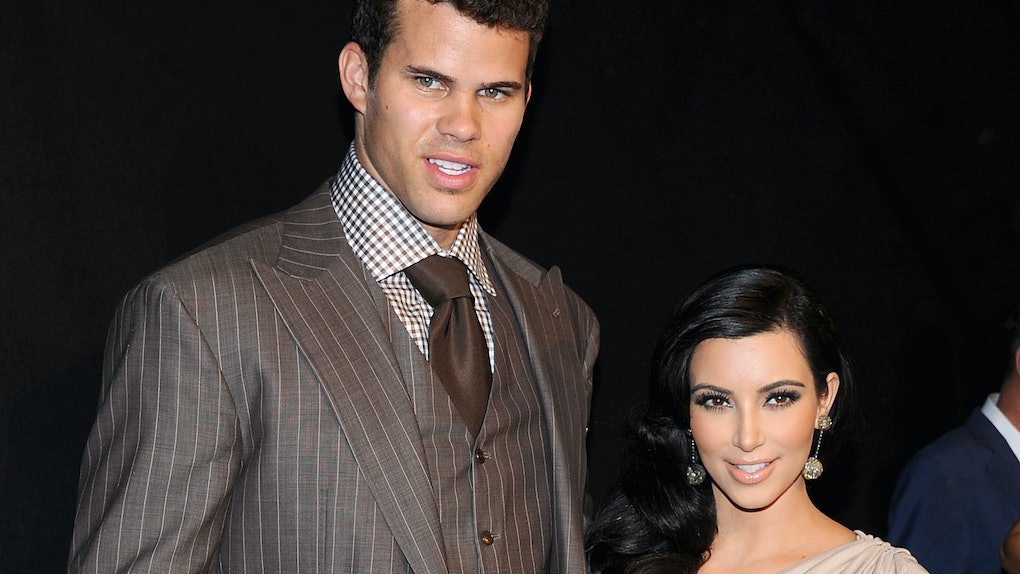 Breaking up in Hollywood can be messy. Breakups in general are messy, but having your relationship unravel while in the public eye seems like a different beast entirely. While some people try to keep things as amicable as possible, others prefer to simply tell the world how they really feel — and I mean the entire world, because as celebrities, pretty much everyone knows those personal details of your life (Major props to celebs for dealing with this, BTW). But sometimes, celebs dish on their exes, because hey, we're all human, right? But these five celebs talked about their exes and things got a little awkward... like, really akward. So if you're interested in hearing some cringe-worthy quotes from some A-list stars, settle in and get comfortable. This might take a while.

And if you're wondering why a little smack-talk about someone you've dated previously is awkward, it's not... unless, of course, you and your ex are both in the spotlight. Reading it on every headline. Seeing it all over social media. Do you get the idea? I think you get the idea.

So let's take a deep dive into the world of celebrity exes. Tighten those seat belts, fam, because things are about to get super bumpy.

Sometimes, love is fleeting. Like, 72 days kind of fleeting.

Kim Kardashian and Kris Humphries had a surprise engagement that led to a marriage, that (perhaps not-so-surprisingly) ended in divorce. But it wasn't until Kardashian spoke with Oprah on Oprah's Next Chapter in June of 2012 to chat about her failed marriage that things sort of took a turn. She told Oprah,

I was in love… I would've had an extravagant wedding anyway, to end that relationship was a risk in itself to lose ratings and I had to take the risk to be honest to myself. I saw how our relationship was. I don't want to get into the small things, but once we moved in, I knew he was not the one.

Yes, you read that correctly. Kardashian admitted that if she ended things with Humphries before the wedding, it was a risk in losing the ratings (there was a special Keeping Up With The Kardashians that televised the wedding).

She also revealed that she knew they weren't meant together once they moved in together. This is just all-around uncomfortable, no?

When Katy Perry and Russell Brand got married on Oct. 23 back in 2010, it sort of made sense. They're both fun-loving and a little bit quirky, so I was feeling it. Despite getting matching tattoos, I thought that this was a marriage that might actually work. But it wasn't meant to be, and the couple divorced in July of 2012.

But fast-forward to July 31, 2014, when Brand was performing a small stand-up gig at London's Soho Theatre, where Brand allegedly joked about having sex with Katy Perry while they married, and things got real awkward real fast. During his routine, he reportedly said,

When I got divorced, I considered becoming a monk. When you’re a monk, you’re not allowed to have sex with anyone. When you’re married, it’s one person. That’s one more than a monk. It’s not that different. I’d be having sex thinking, ‘Think of anyone, anyone else.'

I'm sorry, but if you are thinking of anyone other than Katy Perry while having sex with Katy Perry, something is intrinsically wrong with you.

No, no, no. Sorry, but this is just too uncomfortable for my liking. Russell Brand, if you don't have anything nice to say, don't say it. Actually, don't even think it. K, thanks.

Do you miss Jen and Brad the way I miss Jen and Brad? A part of me still isn't over it, but I realize that it's just not going to happen, no matter how much Twitter wants the ex-couple to get back together.

But, I digress. After their separation back in 2005, Aniston opened up to Vanity Fair and had some nice things to say about Pitt... and a few unsettling ones, too. Aniston talked about how Pitt didn't do anything to intentionally hurt her but said that he's missing a "sensitivity chip." She said,

Brad is not mean-spirited; he would never intentionally try to rub something in my face. In hindsight, I can see him going, ‘Oh—I can see that that was inconsiderate.’ But I know Brad. Brad would say, ‘That’s art!' ... There’s a sensitivity chip that’s missing.

Is Jennifer Aniston calling Brad Pitt a robot? Maybe, maybe not. But all I know is that whenever I see him, I'm half expecting him to say, 'ERROR, ERROR.'

(But also, Jessica Biel is my dream girl and her marriage with J.T. seems kind of amazing, so please don't get mad at me for the above statement.)

When the pair split (RIP), Timberlake opened up to GQ and talked about how Spears didn't stand up for him when she had many chances to, and that rubbed Timberlake the wrong way, so he did what any other jilted lover would — he wrote a song about it, called "Cry Me A River." You might have heard of it. He said,

I felt like she had a couple of opportunities to just sort of stick up for me, and she didn't. Which is ﬁne. But at that time, you know, I fought back, and that's the way I fought back. I used my mind. I came up with a song.

Timberlake's video for "Cry Me A River" was an additional way to make things just a litttle bit more awkward for the world, but man, was it hot.

Kudos, Justin, for using your art as a form of revenge.

Thankfully, both Timberlake and Spears are doing their own thang and seem quite happy, but we'll never forget this denim-wearing couple anytime soon.

LOL, did you really think that we'd get through this post without having Taylor Swift on the list? We all remember — quite vividly, I might add — that John Mayer and Taylor Swift were a "thing" at some point back in 2010, yes? And then, that "thing" went south quicker than you can say "teardrops on my guitar."

But if we know one thing about Taylor Swift, it's that she's pretty much the queen of breaking up and making music about it. When Swift released a track entitled "Dear John" in July 2010, it seemed pointed directly at Mayer. If you listen to the lyrics, you'll probably agree that this song is probably only about one John in particular. Part of the lyrics go:

I see it all now that you’re gone, Don’t you think I was too young, To be messed with, The girl in the dress, Cried the whole way home, I should’ve known. Don't you think 19's too young to be played by your dark, twisted games, when I loved you so.

I'm just going to come out and say it: shots definitely fired.

But then, things got even more heated when Mayer opened up to Rolling Stone about how Swift releasing that song "humiliated" him and felt that the whole situation was "bullsh*t":

I never got an e-mail. I never got a phone call. I was really caught off-guard, and it really humiliated me at a time when I'd already been dressed down. I mean, how would you feel if, at the lowest you've ever been, someone kicked you even lower?

I will say as a songwriter that I think it's kind of cheap song writing… I think it's abusing your talent to rub your hands together and go, 'Wait till he gets a load of this!' That's bullsh*t.

John Mayer was hurting, y'all. Maybe Tay feels a little bit remorseful over it?

There you have it, folks. Now you know that the course of true love never did run smooth, and the course of unrequited love is like, a million times bumpier.

More like this
Are Olivia Lux & Utica Dating After 'Drag Race'? Olivia Gave An Update
By Dylan Kickham
10 'Gossip Girl' Actors Who Dated Each Other IRL
By Corinne Sullivan
Travis Barker Tattooed Kourtney Kardashian's Name On His Chest
By Joyann Jeffrey
Stay up to date