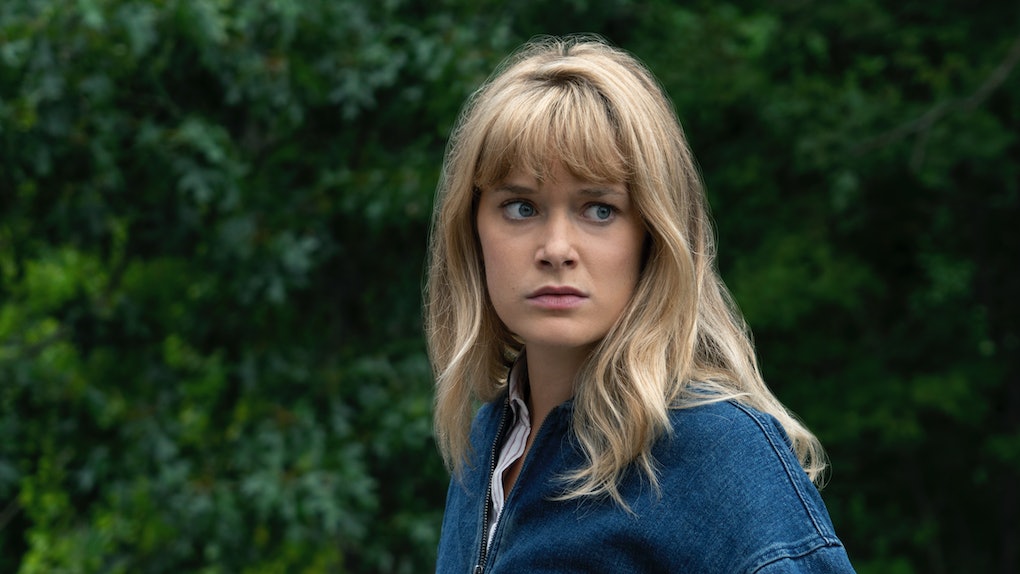 Netflix's The Society has sent its fans into intense theorizing about its Lord of the Flies-esque plot and what that surprise ending means for a possible second season. Although the show seemingly answered one of its earliest mysteries, viewers aren't quite ready to give up on this particular storyline. Theories about Cassandra from The Society prove that fans aren't too convinced about what happened to the character in Season 1.

This post contains spoilers for the entire first season of The Society. The first episode of The Society introduced Cassandra (Rachel Keller) as West Ham's golden girl, serving as class president, star of the school play, and loving big sister to Allie (Kathryn Newton). She took charge when the teens' camping retreat was cut short and they were dropped off in a place resembling their hometown but missing their parents. As the group came to grips with being in a confined parallel universe, Cassandra established working schedules and gathered the women together to maintain order.

But at the end of Episode 3, fans were shocked when Cassandra was shot and killed outside the kids' makeshift prom. As Allie, Gordie (Jose Julian), and the Guard began investigating her death and confiscating guns, loner Greg Dewey (Seth Meriwether) essentially confessed to Harry (Alex Fitzalan) that he shot Cassandra. He was arrested and put on trial, initially playing coy about his truth before admitting he killed her because "she had it coming."

The Guard and Allie later executed Dewey in the woods. Although his emotional state finally seemed to align with the remorse of a murderer, some fans find Dewey's act a little too unbelievable. The Society may have let the mystery of Cassandra's death culminate with Dewey's execution, but viewers on Reddit are debating other options. Did someone else kill Cassandra? The theories below break down the possibilities if the reveal of Dewey didn't satisfy you.

A huge reason why eagle-eyed fans don't buy Dewey as the murderer lies in the sound of feet approaching Cassandra moments before her death. The clicking noise resembles the sound high heels make against concrete, which would likely mean that a woman is the one who pulled the trigger. This has fueled rumors that an adult from West Ham, perhaps even Allie and Cassandra's mom, killed her, which would back up the struck expression Cassandra shows when she faces her killer. This Mommie Dearest-esque idea comes from Cassandra spotting the universe-crossing dog right before she was shot and her mother seeing the same dog in West Ham.

The noise might just be a coincidence, especially because the audience doesn't know enough about the West Ham adults to determine their relationships with their kids and the female teens were mostly in support of Cassandra as a leader. Cassandra might not have recognized Dewey, but the sight of a gun definitely would've been enough to cause that stunned reaction.

2. Pfeiffer Brainwashed Dewey To Kill Cassandra Or Killed Her Himself

The first season left much unanswered about Pfeiffer (Chaske Sanchez), the bus driver who seemingly took out his anger with the West Ham adults on the teens by taking them to the parallel universe. Fans are convinced that Pfeiffer kidnapping the teenagers parallels the legend of the Pied Piper and that he is somewhere in New Ham, and people have even tied the mystery man to Cassandra's death.

A Reddit theory crafted by user fiaxbia says, "Maybe Campbell [Toby Wallace], on behalf of Pfeiffer, convinced/brainwashed Dewey to shoot Cassandra, the reason being that Pfeiffer was afraid she might be smart enough to figure it out, or that if she was murdered, Gordie would stop focusing on how to get home."

The suggestion is plausible but still a little shaky. Wouldn't some hint of Campbell having contact with Pfeiffer come up? More believably, if Charlie the dog serves as a portal to the old world, fiaxbia wonders if Pfeiffer killed Cassandra because she was close to discovering the way home. In that case, he would have worked with Campbell to convince Dewey to take the blame. I'm still a little reluctant to believe any theories of Pfeiffer working with one of the kids, but he's definitely hiding out in New Ham and potentially messing with the teens' minds.

Reddit user Spazy10 admitted that Helena's (Natasha Liu Bordizzo) motives are still unclear, but based on this theory, her characterization does fit the nature of Cassandra's death. Her dad kept a full supply of guns and she knew how to use them, and her reputation as a churchgoing moral authority ensured that no one suspected her as the killer. Spazy10 also pointed out that Helena was reluctant to defend Dewey in court, although her nerves about taking such a high-stakes position came across as the main reason why.

Luke (Alexander MacNicoll) lying to her about Allie and Will's (Jacques Colimon) abuse of power will likely be Helena's immediate Season 2 storyline, and the fact that the show hasn't highlighted any guilty feelings within her probably eliminates her as a possible killer. Still, points for creativity!

IMO, Gordie grew from a creepy "nice guy" to the low-key scientist hero over the course of Season 1. Harboring feelings for Cassandra, he admitted to her that if they went home, she wouldn't need him anymore, which fuels the Reddit theory of user Mazythore. As the key investigator of Cassandra's death, Gordie could have manipulated the medical data to cover his tracks. Given the early portrayal of him as a slightly obsessive admirer of Cassandra, the possibility of him killing her out of possession isn't totally far-fetched, but Gordie's character development and confrontation of Dewey ultimately don't fit with this concept. Ditto for the theory that Becca killed Cassandra — she did stare at pictures of Cassandra a little too much, but the pregnant teen had much more to deal with before Cassandra was killed.

The world has a lot of senseless murder in it, and the budding civilization of New Ham was no exception to this. Even after he was arrested and put on trial, Dewey and his motives for killing Cassandra seemed to fall short. Other than being an intense misogynist with a weird need to please Harry, Dewey's reasoning wasn't as juicy as fans hoped, but sometimes a TV show just needs a senseless killing to move the plot along. Allie's character wouldn't have developed into a leader if Cassandra lived, and perhaps The Society's decision for Dewey to be the murderer is just a demonstration of how susceptible to change people would be if they're removed from the world as they know it.

The surviving kids have bigger fish to fry now that Campbell and the Guard have staged a coup and Grizz's (Jack Mulhern) team has found viable farmland. Maybe Season 2 will reveal a bombshell about Cassandra's death, but if this was all there is, The Society has definitely established itself as a multilayered dystopian story.

The Society is currently streaming on Netflix.

More like this
These 'The Nevers' Theories About That Flying Ship Are Absolutely Bonkers
By Ani Bundel
Shonda Rhimes' Quote About Regé-Jean Page Leaving 'Bridgerton' Is SO Shonda
By Rachel Varina
Will ‘The Falcon And The Winter Soldier’ Get A Season 2? This Could Be A Hint
By Ani Bundel
Stay up to date