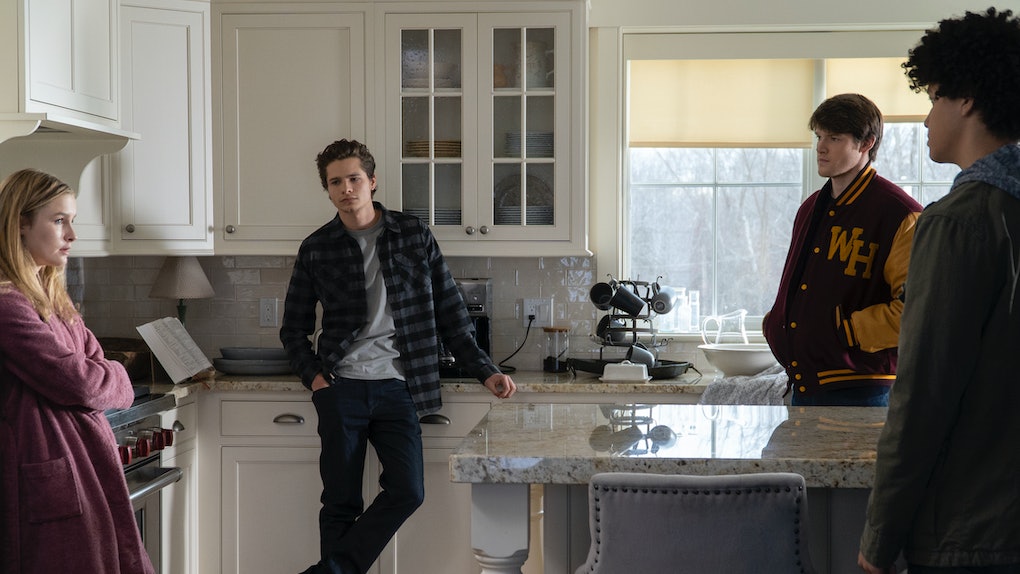 This 'The Society' Theory About The Pied Piper Explains So Much

A skim through the premise of Netflix's The Society instantly draws parallels to English class mainstay Lord of the Flies and its tale of a group of children stranded on a deserted island after their plane crashes. But once you're a few episodes into the drama, it's clear that The Society is not as a simple as William Golding's story, as it delves into the aftermath of teenagers realizing that their town is suddenly devoid of all adults. Ideas about what happens after the first season are spreading, but this The Society theory about the Pied Piper offers clues about a possible Season 2 bombshell.

This post contains spoilers for the entire first season of The Society. Plagued by a pungent smell drifting through the air, the town of West Ham, Connecticut, sent its teenagers on a camping trip in the first episode of The Society. The adults stayed behind to test for threats the smell may cause, but the kids' retreat was cut short thanks to a supposedly blocked road. When they returned home, their parents and other residents were nowhere to be found, and the teens realized that while this place looked like West Ham, they were actually in a confined parallel universe allowing no communication with the outside world.

As the kids learned to survive on their own and build a new civilization, they came to the conclusion that they were taken away as a result of their parents' mistakes. Town officials previously refused to pay a man named Mr. Pfeiffer (Chaske Spencer) to remove the smell, and having spotted him before the trip, aspiring doctor Kelly (Kristine Froseth) realized that Pfeiffer drove the kids to what they began calling New Ham. The final episode's closing scene also confirmed that West Ham still exists and that its adults are mourning the loss of 200-plus teenagers.

The show has several biblical references, most notably the inexplicable graffiti message "Mene, Mene, Tekel, Upharsin." I'm still crafting my theory about how distant brothers Campbell (Toby Wallace) and Sam (Sean Berdy) mirror Cain and Abel, but the most prominent theory regarding The Society actually involves the legend of the Pied Piper. This story took place in the town of Hamelin (which doesn't sound too far off from West Ham) as its villagers experience an onslaught of rats. A stranger arrives and volunteers to remove the rodents with the help of his pipe music. His mission is successful, but the townspeople soon regret the amount of payment they agreed to give the Piper if he got rid of the rats.

Just as Sam and Campbell's dad refused to pay Pfeiffer, the town of Hamelin holds out on paying the Piper. As revenge, he uses his music to lure away the children of the village and lead them into a mountain, which opens to allow the kids and the Piper inside. The group is never heard from again, but The Society fans on Reddit have been studying the details of the story because of its major similarities to New Ham.

In addition to the original story aligning with the details of The Society disappearance, "Pfeiffer" is German for "piper." Versions of the Pied Piper tale also include one child who didn't make it to the mountain with the others, fueling speculation that Charlie the dog, apparently seen crossing between universes, serves in this role. Most importantly, these comparisons could mean that the still-unconfirmed Season 2 will carry a twist involving Pfeiffer.

In the Pied Piper story, the Piper disappears with the children, which could mean that Pfeiffer is somewhere in New Ham with the teens. Reddit users have wondered if he's behind that terrifying video of Helena (Natasha Liu Bordizzo) sleeping, and as he may have control over this alternate universe, he could have access to everyone's houses and what exactly happens in New Ham. Is he still there to ensure that the kids don't find their way home? Does he plan on making contact with them as they uncover the reason why they're there? The specifics of Pfeiffer are still a mystery, but at this point, a sighting of him in New Ham seems imminent.

The Society is currently streaming on Netflix.

More like this
This TikTok Theory About Eric From 'Boy Meets World' Will Blow Your Mind
By Rachel Varina
What Is The Golden Dawn In 'The Irregulars'? It Was A Real Society
By Ani Bundel
Disney+'s 'Loki' Trailer Reveals Key Info About Marvel Fans' Favorite Villain
By Ani Bundel
Stay up to date