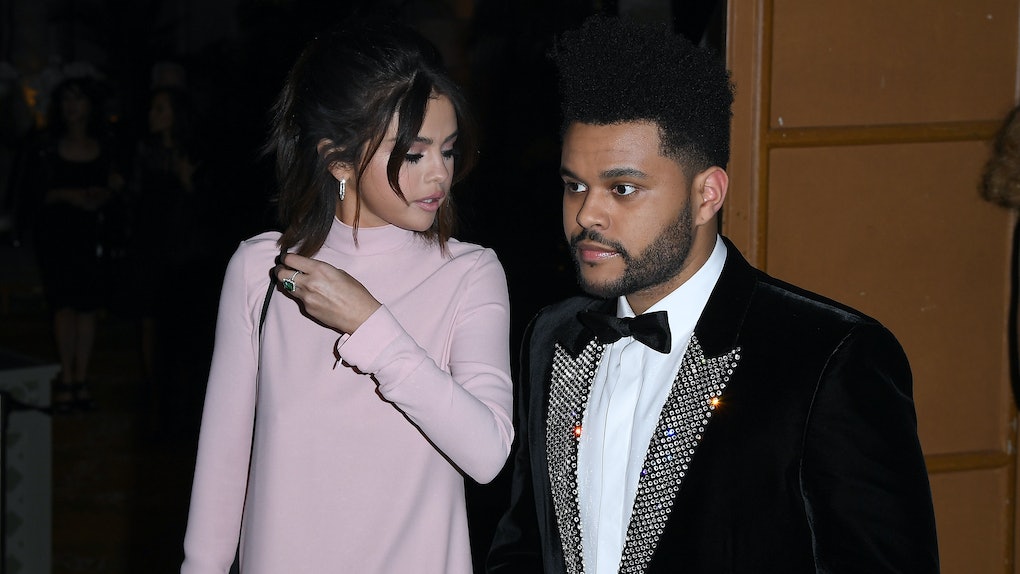 5 Signs Selena Gomez & The Weeknd Were Gonna Break Up, According To An Expert

After 10 months together, most of us thought Gomez and The Weeknd were meant to be. They made an absolutely stunning couple and seemed to be infatuated with each other. However, on Oct. 30, People reported that multiple sources came forward claiming the couple ended their relationship. Basically, the reports said that the pair's demanding schedules made it difficult to fuel a relationship. The source said,

She [Selena] and Abel have been going back and forth for a few months about their relationship. It’s been hard with him being on tour and her shooting in New York. That wasn’t easy on them ... It’s been hard for them to come to the realization that this is the direction things were heading, but it’s been hard for months.

Elite Daily has reached out to both Selena Gomez' and The Weeknd's teams for comment, but did not hear back in time of publication.

Dr. Danielle Forshee, LLC is a doctor of psychology and a licensed clinical social worker. She has worked full-time in the fields of clinical psychology and social work for more than a decade. Forshee gave Elite Daily an insight to why Gomez and The Weeknd called it quits, and gave some intuitive suggestions that this could have been a long time coming.

Below are five signs that could show Gomez and The Weeknd were in choppy waters.

1. Their Careers Could Have Caused Distance In Their Relationship

At surface level, Gomez and the The Weeknd both being in the music industry seems like a plus. They probably have a ton in common and would understand the hectic schedules, red carpet appearances, and general world famous singer dilemmas.

But in reality, the fact that both are so busy could have contributed to the split. Dr. Forshee said,

While I can’t comment specifically pertaining to either of their personalities, I can speak to the fact that they are both singers who travel a lot and spend a lot of time apart, and that these factors could easily cause emotional distance if [their relationship is] not attended to every day.

2. Justin Bieber Could Have Played A Role

If Gomez and The Weeknd weren't doing well, Gomez spending all her extra time with Bieber could have been the final nail in the figurative relationship coffin. Dr. Forshee said,

It is likely that the sound of Justin’s voice, his smell or gestures have triggered positive memories of her relationship with him. Once positive memories come to the surface, our brain produces chemicals that make us feel a “high” and hormones that make us feel reattached. If, in fact, there was a lot of distance between The Weeknd and Selena, and she was increasing the time spent with Justin, this may have put her relationship with The Weeknd at risk.

3. Distance May Have Been The Biggest Factor

Anyone who is in or has attempted a long-distance relationship knows that they are hard work. If you don't have the time or dedication, they can fall apart easily. Dr. Forshee explained that most couples still have that "new love" excitement at 10 months into the relationship. This means the distance could have played the biggest role in the split. She said,

At the 10-month mark, it’s not typical for the new love excitement to fade unless you’re spending almost every single moment of your time together. In the case of The Weeknd and Selena, they sound like they’ve been spending a lot of time apart. This may be the cause of the problem, because when people who are in relationships have too much space in between them, and don’t go out of their way to create daily rituals of connection and intimacy, show appreciation, and provide validation, their relationship is at risk to outside influence.

Beiber could have been one of these "outside influences." Dr. Forshee continues,

Outside influence could be seeing an ex in a more positive light, and remembering all the positives about their relationship and forgetting about the negatives (i.e. Justin Bieber).

Obviously, a long-distance relationship can be hard to maintain. Dr. Forshee explained that it's harder to get your emotional needs met when your partner is far away. Mix in impossibly busy schedules, and it probably weighed heavily on Gomez and The Weeknd. Dr. Forshee said,

In the event that Selena wasn’t getting her emotional needs met by The Weeknd, or in the event that she didn’t know how to communicate her needs to The Weeknd, this may have caused some type of relationship anxiety for her. Because our brain never forgets, it is likely that Selena associated positive feelings with her previous lover that she was no longer able to get from The Weeknd. It’s possible that the only way that she knew how to get her emotional needs met was to spend time with Justin Bieber.

When all else fails, social media truly tells all. Dr. Forshee mentioned,

It appears that there’s been a decline in reciprocal liking of each other’s Instagram photos, compared to earlier in their relationship. This may be a nonverbal cue of the potential growing distance of attention to each other and their emotional connection.

This is an interesting point because Gomez and The Weeknd are usually very active on each other's Instagram accounts. Hmmm.... major suspect.

Although Gomez and The Weeknd have called it quits, it seems as though they're on good terms. Only time will tell if anything is developing between Gomez and the Biebs. Tick, tock.