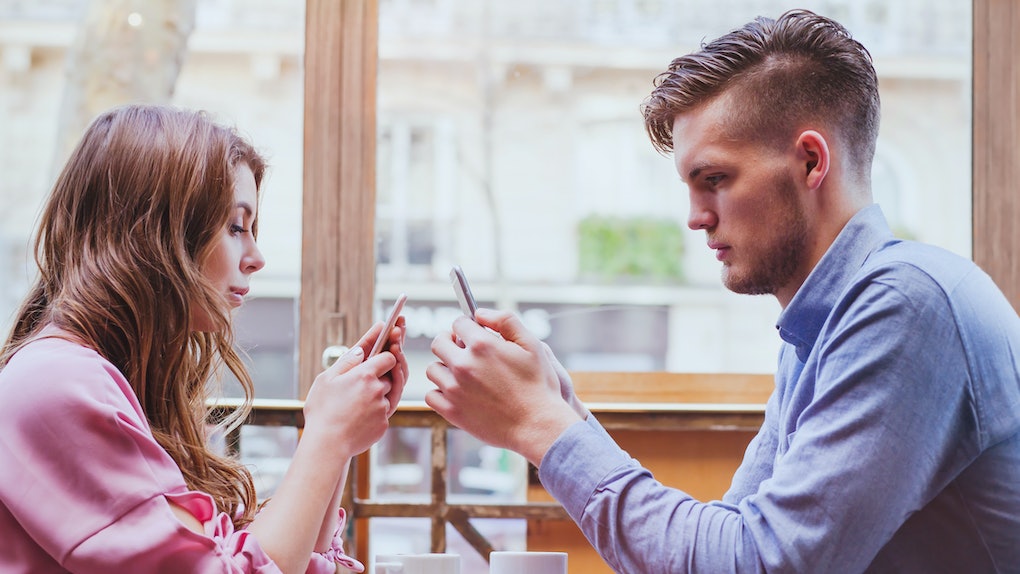 Even more than a goodnight kiss or a free dinner, I think most people go on a first date hoping for sparks. It may not be love at first sight (and TBH, it rarely is), but effortless conversation can put both you and your date at ease — and great conversation can even lead to second dates. Of course, there's always the chance you and your date simply don't click. Certain personalities don't tend to hit it off, and when it comes to the most boring zodiac sign pairings, dates between these signs are pretty much destined to be duds.

It's not that certain zodiac signs are boring themselves (though you could argue some have a tendency to be... less exciting than others). It's just that a few sign pairings have so little in common that when you put them together, you're more likely to hear crickets than an actual conversation. Getting a rapport going isn't impossible — after all, coming up with good convo starters is tricky for anyone, regardless of your sign. But if any of these pairs decide to go on a date, they better make sure their phone is charged, because they're probably going to spend the whole dinner staring at it.

You think this pair might hit it off, where they're both practical, analytical, and a bit detached, but it's those shared qualities that make conversation between these two earth signs a total snooze. While a Virgo would love a person who shares their passion for matcha green tea and yoga, they won't find that in a Capricorn, who'd rather steer the conversation towards their job and their latest passion projects. Both signs are also known for being reserved, so it will take a while for a convo to get going in the first place — and once it does, it's likely to leave something to be desired.

Aries and Taurus are both powerful and strong-willed, but they assert that will in entirely different ways. Aries are action-oriented and likely to leap before looking, while Taureans tend to take their time before making any major (or even minor) decisions. As they're both terribly stubborn, getting an Aries to slow down is as unlikely for a Taurus as an Aries getting a Taurus to pick up the pace. Aries are ultimately likely to find Taureans impossibly rigid and dull, while Taureans will quickly tire of Aries' unwillingness to consider any viewpoint that doesn't reflect their own.

You'd be hard-pressed to find two signs as poorly suited for each other as a Scorpio and a Gemini. Chatty and sociable Geminis can usually get anyone talking, but even they will have a hard time cracking open a Scorpio. While one sign sees the glass as half-full, the other only ever sees the glass as half-empty (and you can probably guess which is which). For Geminis, Scorpios are usually seen as far too elusive and dark to engage in conversation, and Scorpios are likely to find Geminis too shallow and unflappably optimistic to take seriously.

Cancers and Leos both have big hearts and lots of love to give, but that's probably the extent of their similarities. Cancers are homebodies who desire love that is familial and comfortable rather than fleeting and exciting. Leos, on the other hand, are pretty impossible to tie down. A Cancer might suggest a first date that involves a couch, cuddling, and Netflix, while a Leo would rather attend a music festival or hit up a nightclub. As a result, Leos will see a Cancer's stability as a threat to their independence and fun-loving nature, and a Cancer will find a Leo's relentless pursuit of fun just as tedious.

These two may hit it off beneath the sheets, but when it comes to achieving a stimulating convo rather than an orgasm, Libra and Aquarius are likely to be left unsatisfied. Libras care deeply about what others think, and they may even act disingenuous if it means winning the approval of others. Aquarians, however, couldn't care less what the haters say, and they won't hesitate to become antagonistic just to get a rise out of people. It won't take an Aquarius long to write off a Libra as a people-pleasing phony, while a Libra won't have any tolerance for an Aquarius' impulse to ridicule anything mainstream.

It's true that persistence and patience might allow even the most incompatible zodiac pairing to find common ground. However, when these signs go on a date, they're more likely to ask for the check than ask to see the dessert menu after dinner, as they'll want to put an end to this terrible date ASAP.