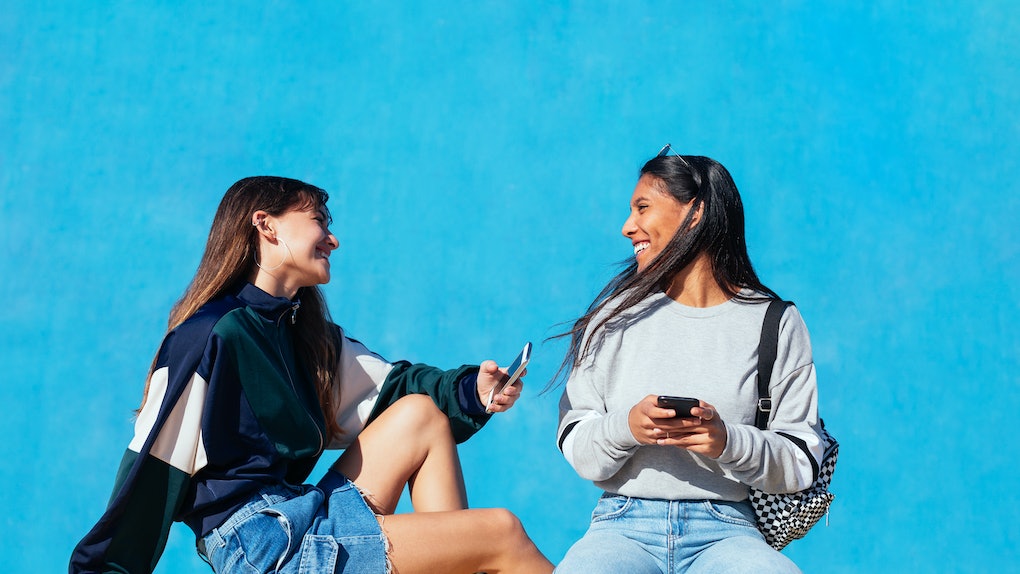 Back in the day, flirting meant pumping yourself up for some IRL conversations and ice breakers. Although I'm told that people do, in fact, still flirt in person (where these people are, I'm not sure), it's safe to say a lot of dating these days happens over the phone. So, if you haven't exchanged numbers yet or you're just more into the 'Gram, knowing the best Instagram comments to leave on your crush's old photo can be a great URL way to grab their IRL attention.

Though deep scrolling is something everyone does — commenting on something from three years ago can sometimes have the potential to make your boo feel a little uncomfortable. To a Jenner, "old" could mean a snap from last week, while to my mother an "old photo" is something that came out of an actual film camera. Though it's good to make the first move, IRL or on the 'Gram, you may want to consider just how old the picture they posted is before posting a comment. You're a smart and mindful creature and you know the best ways to interact with your crush.

If you're feeling spicy, here are six comments to leave on your crush's old pics.

1. Thanks For The Invite.

If your crush posted a pic of an amazing party or a group pic with a bunch of your friends (that you're not in) making a joke about wanting an invite/wishing you were there can be a great way to get their attention. If they're at a fun bar or your favorite sushi restaurant, commenting that you love whatever place they went to or that you've always wanted to go there could also open the door for them to get in your DMs to invite you next time.

If your crush went on on a gorgeous vacation a couple summers back or they're eating the most amazing burger you have ever seen — asking them where something is in an old photo is a great way to get a conversation started. Whether you talk about your favorite places to travel or the best hot wings around the city, asking them about an old picture is a great way to get to know them better.

If your crush looked just like the little kid from Stuart Little (who, BTW, is ripped now) when they were little or their latest vacation picture makes them look like Megan Fox, giving them a little compliment can get a great way to get their attention. A far cry from directly stating "You are so hot, I want to lick the sweat off your forehead," giving them a celebrity or pop culture look alike can be a sly way to say you're into them.

4. Can I Borrow That *Insert Object In Photo*?

If your crush wore an amazing Teletubbies costume on Halloween or they're drinking out of an amazing pineapple shaped party mug — asking to borrow whatever fun item they have in a pic can be a great way to get conversation started. Maybe you have your own theme party coming up and you extend an invite or perhaps you use the prop as a way to talk about your own Halloween plans. Whatever the case, commenting on a fun object in a picture can totally make you the hot subject in your crush's mind.

5. *Insert Color They Are Wearing/Season The Picture Was Taken In* Looks Great On You

If your boo looks amazing in their skiing pic from last winter or the red ensemble they wore to formal made you swoon — leaving a sweet compliment can make them totally blush. Something like "Summer looks great on you!" or "Blue really is your color" gives them a nice compliment without focusing too much on specific body parts.

Commenting on your crush's old picture can be a great way to get the ball rolling. Whether you make a silly joke about their Halloween costume or earnestly ask about their last vacation, jumping in the comments can be sweet, funny, flirty, and everything in between. A picture may be worth 1000 words, but a good comment is priceless.