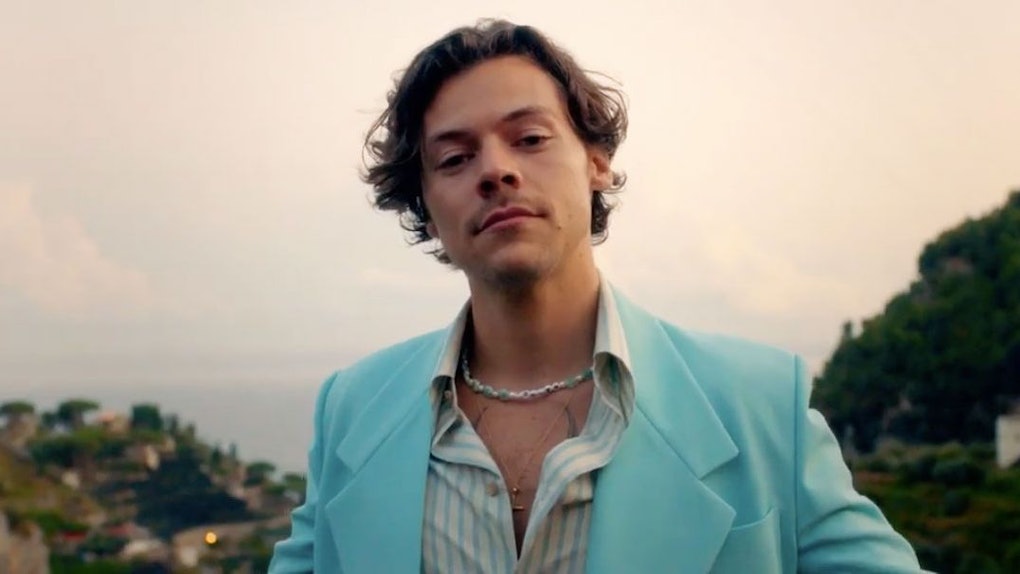 By now, you've likely watched Harry Styles' "Golden" music video at least 10 times. The video features Styles running throughout the Amalfi Coast, and it truly lives up to its "golden" name. The vibes are immaculate and make you travel to Italy to check out the Harry Styles' "Golden" music video filming locations on a future getaway. The only thing that would make a European vacation even better is having Styles by your side.

A teaser of Styles running through a dark tunnel dropped on Oct. 25, 2020, and he was spotted back in September filming in Italy, according to Harper's Bazaar. Now, we can finally put two and two together, and it equals this feel-good music video that gives you a glimpse into what it might be like chilling with Styles on this gorgeous coastline.

Prep for a future wanderlust-filled vacay by noting some spots that are in Styles' music video. Pack your cutest swimsuit for a cliffside beach trip and swimming in the Tyrrhenian Sea. Don't forget a button-down shirt for taking a hike in the hills and going for a jog through the tunnels. You can even opt for a scenic drive along the coast, blasting Styles' Fine Line album. Pretty much, any of these five locations will have you feeling "so golden."

According to this TikTok video, Styles was apparently spotted driving a vintage Alfa Romeo car in Maiori, Italy. He drives right pass the Casa Vacanze, so on your trip, take the same route. Go for a scenic drive along the same Amalfi Drive road in some matching white driving gloves.

2. Cruise Through The Amalfi Coast Tunnels

As the teaser shows, Styles can be seen running through tunnels in his music video. While you're on your scenic drive, make sure to cruise through a few of the tunnels along Amalfi Drive as well. Wear a white button-down just like Harry, and time your drive with the sunset so you really get that golden hour glow.

Go for a stroll (or dance like Harry) along some walkable streets in the neighborhoods. Make sure to capture an epic sunset picture overlooking the water, dressed in a #twinning teal blazer.

3. Stand On Some Rocks Out At Sea Like The Faraglioni

At one point in the video, Styles can be seen standing on some rocks in the sea. Sporting a yellow fisherman's hat, he's having a totally carefree time, checking out some tide pools. While you're on the Amalfi Coast, consider checking out the Faraglioni in Capri, which are rock formations in the water and an epic sight to sea.

4. Run Through The Italian Hills

Along with running through tunnels, Styles can also be seen running along a trail in the hills. If you love to hike, there are plenty of trails to check out on the Amalfi Coast. One that resembles the one in the "Golden" video is the Valle dei Mulini hike. It's a forest hike with waterfalls that would make for such a romantic date idea with your partner.

5. Go For A Swim In The Tyrrhenian Sea

To cool off after all that running, Harry Styles can be found swimming in the Tyrrhenian Sea. Visit a cliffside beach like Cavallo Morto Beach in Maiori, Italy. This spot is a true gem, as you can only get there via boat. Get yourself an underwater camera to capture some action shots swimming — just like in the music video — that you can post on the 'gram with your fave "Golden" lyrics.

More like this
40 Captions For Spring Staycation With Your Dog & Any Pawsible Pics You Take
By Rachel Chapman
Will BTS' Camping Collection Restock? Here's What To Know About The Helinox Collab
By Marisa Casciano
21 Taylor Swift's 'Fearless' Lyrics For Throwback Pics That Belong On The 'Gram
By Rachel Chapman
Stay up to date