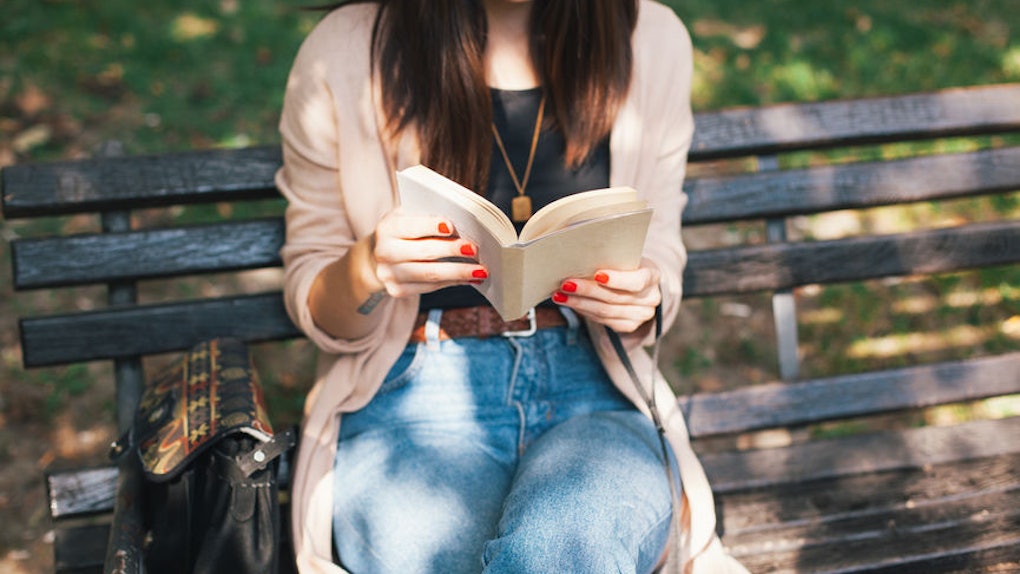 There’s more to Halloween than stocking up on the miniatures of your favorite chocolate candies, drinking Pinterest-worthy witch’s brew, and finding the perfect costume to coordinate with your squad. Personally, I’ve always been a little less interested in the partying aspect of All Hallows' Eve — though, don’t get me wrong, playing dress-up is my jam — and more inclined to celebrate the holiday curled up in the corner of my sofa with a scary book and a cup of tea. This year especially, there are just so many good books to read for Halloween 2018 that my to-be-read (TBR) list is overflowing. Realistically, I won’t have time to hop from one haunted attraction to the next, re-watch all of my favorite horror films, and check every book off my Halloween bucket list, but you can bet your bottom dollar I’m going to try my best.

Up until a few months ago, any book recommendation I received was always from my older sisters, mother, or best friends. But then I stumbled upon this magical digital realm known as BookTube, and my bookshelf (not to mention my bank account) has never been the same. BookTube, for those of you who don’t know, is essentially just a bunch of channels on YouTube dedicated to all things novels, novellas, short stories, and literary reviews. Personally, I’ve always been a fan of fitness and beauty influencers who record videos to talk about the products they love and loathe, but one day, I started to wonder if book reviews were big on the platform, too. As far as I was concerned, Goodreads was my go-to for any and all things bookish, and while I still absolutely adore Goodreads to document my own ratings and hold myself accountable to meet my reading goals, BookTube is unlike anything I’ve ever come across.

The BookTube community is not only welcoming, it’s also really inspiring and motivating because, let me tell you, without a teacher assigning me something to read, I definitely fell off the literary bandwagon after college. These days, however, all I want to do is lose myself in a book, so when these online personalities started to combine literature with my favorite season and holiday in their recommendations, rest assured, these channels had my unwavering attention.

If you, too, love everything All Hallows' Eve, and are interested in picking up a spooky story this season, here are a few BookTube-recommended titles for the occasion.

If You're Looking For A Dark Fairytale

Hailey In Bookland was the first BookTuber to pique my interest in online literary culture, and every book she's mentioned in the videos I've tuned into thus far sound so good. My TBR pile has grown tremendously because of her.

During Hailey's fall recommendations video, The Hazel Wood by Melissa Albert really struck my fancy for two reasons: 1) The cover art is fabulous, and 2) according to Hailey's summary of the novel, the story is essentially one that encompasses all the creepy vibes of Halloween, plus the authentic fall feels you look for once the season turns. Albert fuses mystery with dark fairytales, and a whole lot of drama in her hazel woods, so grab a cup of coffee and get comfy. I expect this novel to a page-turner at best.

If 'Hocus Pocus' Is Your All-Time Favorite Halloween Movie

Normally I'm very on top of any news regarding Disney Channel original features, and I've low-key been anticipating a Hocus Pocus sequel for years. I'm still holding out for the remake (almost 25 years later and finally details have been revealed regarding the next film adaptation), but until I can get cozy on my living room couch and visually watch the Sanderson sisters reunite once again to raise all hell in Salem, Massachusetts, Emma of the BookTube channel emmabooks has brought to my attention that a sequel novel was published this year. IMO, that's even better than a movie.

Emma got it right when she described the plot of Hocus Pocus as one of the most iconic Halloween stories of the millennial generation. The book, she explained, is split into thirds: The first acts as a kind of novelization of the movie you know and love, and the second and third portions take place years into the future when Max and Alison's daughter, Poppy, take on the Sanderson sisters as her parents did before her. Are you ready for this? Because I am so ready for this.

For Anyone Who's Never Experienced The Twilight Saga

Whether you're someone who wasn't that interested in the Twilight saga as a teenager and would like to give this book a second chance, or you've never picked up a copy at all, join along with Naya Reads and Smiles this season as the BookTuber experiences, for the first time, the slightly overdramatic but nonetheless intriguing synopsis of young woman who falls in love with a vampire. As if high school on its own isn't enough of a struggle, right?

I wouldn't consider Stephenie Meyer's saga to be a thriller, per se, but it's definitely an entertaining read if you're into fantastical love stories and vampire YA. If nothing else, it's a quick read that'll get you in the spooky spirit. And, who knows, maybe re-reading the tale will finally persuade you to pick a side: Team Edward or Team Jacob?

If Horror Stories Are A Little Too Scary For Your Liking

For the most part, I'd personally read just about anything Hannah of A Clockwork Reader recommends, and during her roundup of the best Halloween books to read in 2017, The Night Circus by Erin Morgenstern was one that Hannah admitted she recommends "literally all the time." This particular version of the book was published with red pages and actually released as the "The Halloween Edition" some years ago, so not only will it look cool on your shelf, it has a fun backstory, too.

If you're a little less interested in the horror side of Halloween stories, it sounds like The Night Circus would be a good alternative for you. Essentially, a circus appears only at night, and it's run by two rival magicians. The story takes you through their competitions, and according to Hannah, the content is so descriptive that it will "evoke every one of your senses," allowing you to really get wrapped up in the story.

For Anyone Who's Ever Secretly Felt For The Villain

Because You Love to Hate Me Edited by Ameriie
$11.69
|
Amazon

In an ideal world, Halloween lovers everywhere could conjure up a freeze-time spell that would allow them to cancel any and all work or social obligations for the entire month of October so that they could, instead, pour themselves a cup of witch's brew and read scary story after scary story. Unfortunately, though, #adulting is a thing, and if you have a very limited amount of time to spare on fantastical worlds and ghost tales, fear not.

BookTuber Jesse The Reader highly recommends Because You Love to Hate Me for readers whose time is of the essence come October. The book is a compilation of 13 short stories written by 13 different authors, including Victoria Schwab and Marissa Meyer, who have teamed up with 13 influential bookTubers — such as Jesse himself, Regan Perusse, and Zoë Herdt — to re-imagine fairy tales from the perspectives of misunderstood villains.

To get the most out of the experience, Jesse suggests reading these spinoffs one at a time to really savor them and get you hyped for Halloween in the weeks leading up to the holiday.