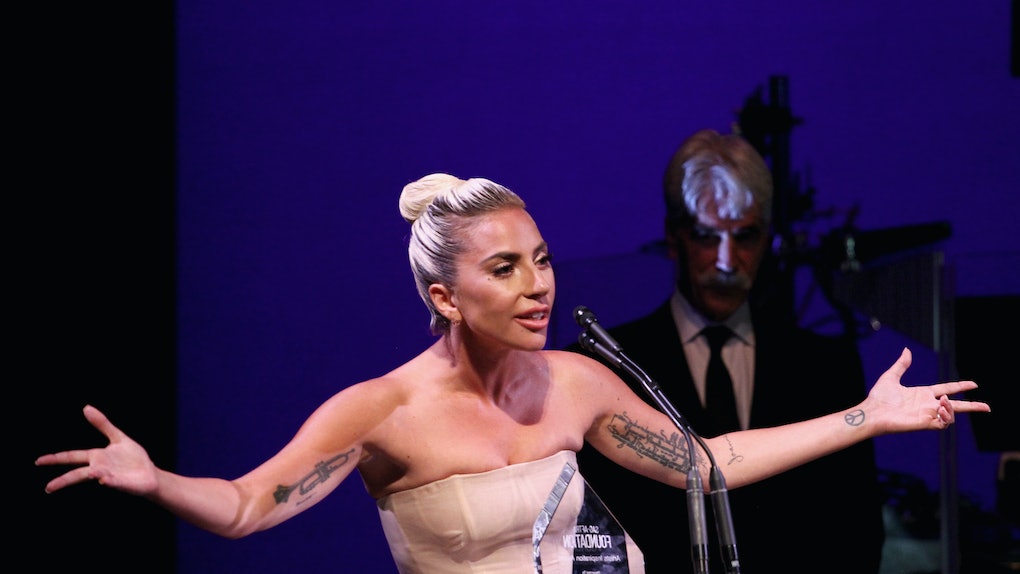 Mental health is an ongoing conversation, one that needs to be kept alive by people from all walks of life. After all, mental health struggles can affect anyone, and while the challenges that come with these conditions can be brutal, the best thing that anyone can do is to simply keep talking about it, and keep spreading awareness. Of course, mental health is almost always difficult to talk about in any context, but that's why I have such a soft spot for all the ways Lady Gaga has shown support for mental health awareness. She brings a kind of comfort and care to these discussions that, IMO at least, is truly unmatched. You can tell she's deeply passionate about these issues, and it's nearly impossible not to be moved by her words when you read what she has to say.

According to the National Institute of Mental Health (NIMH), roughly one in five adults in the U.S. is living with a mental health condition. More specifically, Johns Hopkins Medicine states that about 10 percent of American adults "will suffer from a depressive illness" each year, such as major depression or bipolar disorder.

Again, these are issues that can affect literally anyone. It's something we need to continue to talk about, and thankfully, Lady Gaga chooses to use her platform time and again to bring light to these topics. Here are four times she showed support for mental health awareness and proved what an awesome role model she really is.

When she talked about kindness at the SAG-AFTRA Foundation Gala

Lady Gaga recently received the SAG-AFTRA Foundation's Artists Inspiration Award, and in true Gaga fashion, she took the opportunity to address the topic of mental health in her acceptance speech. According to The Hollywood Reporter, Gaga told the audience that the world is currently facing "a crisis of epic proportions" in terms of mental health. She said,

We are losing a generation of young people who do not believe that their voices are worth hearing, that their pain has no end and that their contributions are not valuable enough to move the needle in society and culture. We are facing a crisis of epic proportions and the cause of that crisis is our inability or unwillingness to be open and honest about one thing — mental health, today.

She went on to say that she personally continues to struggle with her own mental health, and while it can certainly be a heavy, dark subject to discuss, Gaga's main point in her speech was to emphasize the power of kindness:

When she FaceTimed with Prince William about mental health

Back in April 2017, Lady Gaga talked with Prince William, another mental health advocate, via FaceTime, about why it's so important to speak openly about these issues, despite the sense of uninvited shame that can sometimes creep into the discussion. Gaga said during the video chat,

There's a lot of shame attached to mental illness. You feel like something is wrong with you. I should be so happy, but you can't help it when in the morning you wake up, you are so tired, you are so sad, you are so full of anxiety and the shakes that you can barely think.

Prince William, along with Prince Harry and Kate Middleton, the Duchess of Cambridge, founded the Heads Together initiative in 2016 to help combat the stigma surrounding mental health, as per ABC News, and this video partnership with Lady Gaga showed that the A Star Is Born actress is both willing, and eager, to work with others in spreading awareness about mental health.

When she wrote about PTSD for the Born This Way Foundation

In a 2016 open letter for her mental health organization, the Born This Way Foundation, Lady Gaga shared that she had been diagnosed with post-traumatic stress disorder (PTSD). According to the NIMH, PTSD can happen after a person experiences "a shocking, scary, or dangerous event," and the symptoms can include flashbacks, nightmares, and generally terrifying, debilitating thoughts about the traumatic event.

In the open letter, Gaga wrote,

It is a daily effort for me, even during this album cycle, to regulate my nervous system so that I don’t panic over circumstances that to many would seem like normal life situations. Examples are leaving the house or being touched by strangers who simply want to share their enthusiasm for my music.

The 32-year-old performer also acknowledged in the letter that "many associate PTSD as a condition faced by brave men and women that serve countries all over the world," and while this is certainly true of the condition, Gaga's goal here was to "raise awareness that this mental illness affects all kinds of people, including our youth." She wrote,

I pledge not only to help our youth not feel ashamed of their own conditions, but also to lend support to those servicemen and women who suffer from PTSD. No one’s invisible pain should go unnoticed.

In October, Lady Gaga partnered with Dr. Tedros Adhanom Ghebreyesus, the head of the World Health Organization, to write an op-ed for The Guardian about the need for global action on expanding mental health treatment and support services. Gaga and Dr. Ghebreyesus wrote,

We can all help to build communities that understand, respect and prioritize mental wellness. We can all learn how to offer support to loved ones going through a difficult time. And we can all be a part of a new movement – including people who have faced mental illness themselves – to call on governments and industry to put mental health at the top of their agendas.

The two authors acknowledged in their op-ed that they come from completely different walks of life, but if anything, that's what makes their joint message all the more powerful. As Gaga and Dr. Ghebreyesus explained, they've both seen how the right political initiatives can truly effect change in this world. But now, they wrote, "it is time to do the same for mental health."