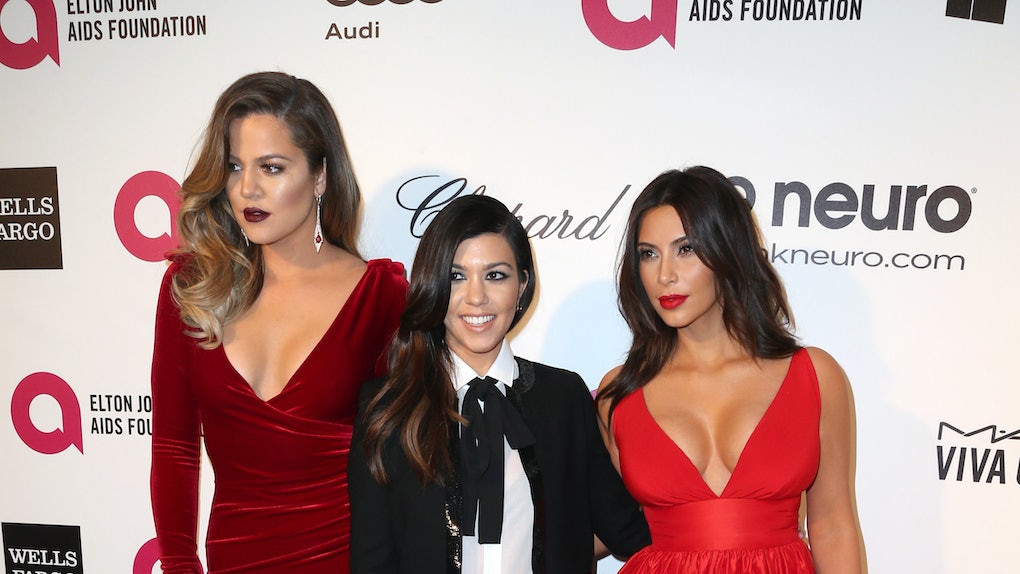 4 Shady Things Kim, Kourtney, & Khloe Kardashian Have Said About Each Other

If you have a sibling, then you know how difficult it can be to get along sometimes. Yes, you love them. Yes, you care about them. But at the end of the day, they just get on your damn nerves. And, while you can try your best to keep your cool, there are times when you just get into a blinding rage and say things you don't mean. Well, guess what? Celebrity siblings are no different, and I can't think of any other family who prove that sentiment better than the Kardashians. Whether you're watching them collectively lose their sh*t with one another on Keeping Up With The Kardashians or reading some really catty interviews with the sisters, these are just a handful of shady things Kim, Kourtney, and Khloé Kardashian have said about one another. At the end of the day, though, they are sisters, and will (hopefully) apologize and hug it out whenever a line is crossed — and honestly, there are quite a few times where that has happened, as you'll read below.

Some of these go below the belt (which is a very Kardashian thing to do), but let's be real: They are really just like your average siblings when they fight, even if it is on a more brutal scale. Just try not to wince too hard when you hear all the low-blows these sisters took at one another.

1. When Kim called Kourtney the "least interesting" sister to look at.

This one was a tough one, you guys. Back in July, an episode of KUWTK revealed that Kim and Kourtney were up in arms over scheduling a photo shoot. It's a long story, but the most important thing to take away from it is that Kim flipped out on Kourtney, basically yelling about how Kourtney's career pales in comparison to her own, so she should be willing to work around her schedule. "Maybe if you had a f*cking business that you were passionate about, but you don’t, so don’t even act like you know what I’m talking about!" she screamed.

Kim continued, yelling to her family, "I need Kourtney to not be so f*cking annoying with a stick up her *ss like she f*cking runs this sh*t, because she doesn’t."

She then delivers the final, terrible blow, yelling that Kourtney is "the least exciting to look at."

Yikes. It pretty much ends with Kourtney storming off and calling Khloé on the phone to call Kim a "very distraught, evil human being."

Needless to say, that one didn't end so well.

2. When Kim and Kourtney had an epic Twitter feud about "priorities."

Continuing on from the previous situation, we found Kim and Kourtney at odds once more.

Just after the episode where we saw Kim drag Kourtney for being the "least interesting" Kardashian aired, Kim defended herself with a tweet, calling Kourtney out on not being respectful of her busy schedule. On Aug. 5, she wrote, "You hear that??? If I don't take my meeting as scheduled then I couldn't launch my ULB KKW BEAUTY collection! AND I had this oNLY time slot to plan my baby shower, but Kourt wouldn't budge to help a sis out!"

And, just minutes after, Kourtney delivered the ultimate punch to the gut, tweeting, "We all have our own priorities. Mine is being a mother."

That really fired Kim up, who took to Twitter again to let the world in once more on their dirty laundry. "And mine is not? The shoot was with our kids!!!!! My #1 priority is being a mother as well and I can work too, so can you!" she tweeted.

All of it was pretty harsh (and awkward) to bear witness to, but Kourtney finally raised a small white flag, explaining that she felt "spread thin," with everything, but ultimately called Kim "an amazing mother," therefore seemingly quashing this Twitter war between the two sisters (for the time being, at least).

Proof that just because you might see your sibling frequently, doesn't mean that your arguments have to take place in person.

During the season finale of KUWTK back in March, the world saw the siblings travel to San Francisco, and watched the three sisters take a private Alcatraz boat tour.

It sounds fun as hell, but obviously, when you're a Kardashian, things are a lot different.

Khloé was aggravated that Kourtney spent her time on the phone, so when Kourtney suddenly tried to point something out on the tour (while she was still in the corner talking to someone on her phone), Khloé lost it. "What the f*ck are you here for? Don’t chime in if you’re not going to get off your f*cking phone call all the time. You’re like, a waste of space in my meter right now."

If someone said those words to me, I'd be unable to even speak. But because these sisters curse each other out with almost every breath they take, Khloé goes back to sightseeing like it ain't no thang. It's truly something to behold:

Which leads me to believe that being called a "pregnant wh*re" was NOT the shadiest thing she's been called by her sisters. How does this family even work, y'all?

4. When Kim told Khloé that she has an "inferiority complex."

Hell hath no fury like a Kardashian scorned. Let's rewind way back to 2015 to an episode of Keeping Up With the Kardashians, where the family went on a snowy retreat. Except things on this fun little getaway were slightly less zen than you'd hope.

While hanging out with best friends Jonathan Cheban and Malika Haqq, Kim and Khloé got into a bit of a scuff over the fact that Jonathan told Malika that she was jealous of him, because his best friend Kim is more famous than her best friend Khloé. *Insert eye-roll here.*

Kim tells Khloé, "I think that both of you have a f*cking inferiority complex."

"Oooh, burn,” Khloé says, clearly mocking her sister. "Maybe that’s why I don’t want to hang out with you," she adds.

What happened to the good old days of simple hand-to-hand combat?

OK, you guys. I'm officially exhausted from writing about all of this shade. Do me a favor and go text your sister, because I won't deal with sibling rivalry of any form ever again.

More like this
Shanna Moakler's Comment About Travis Barker's New Kourtney Tattoo Is So Shady
By Caroline Colvin
Travis Barker's Instagram About Sex With Kourtney Kardashian Will Make You Blush
By Candice Jalili
Meghan Markle & Prince Harry's Beef With The British Tabloids, Explained
By Brandy Robidoux
Stay up to date