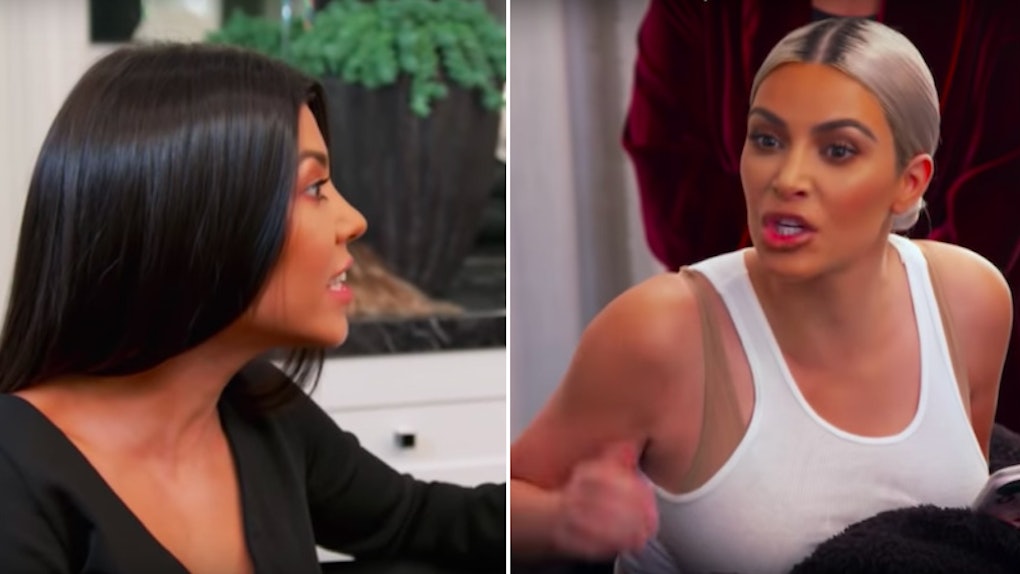 When I was younger, my sister and I would occasionally throw insults at each other when we were angry. Sometimes sibling rivalry is a real thing, and believe me, I get that. But then we grew up, matured, and are now BFFs (hi sis!). Sadly, though, it looks like the Kardashian sisters might not be quite there yet, and Kim Kardashian's comments about Kourtney's looks are uncalled for, and if I'm being honest, pretty rude. We see it all pan out on Keeping Up With The Kardashians, and from the looks of it, it does *not* look pretty.

In an exclusive clip from Sunday's episode of KUWTK, we see a visibly annoyed Kim arguing with Kourtney about the scheduling of a family photo shoot. Basically, Kim and Kourtney's schedules don't align, causing a small ~situation~ with the timing of their upcoming session.

Momager Kris Jenner inserts herself into the conversation, asking Kim if she needs any help figuring out the timing of things, and Kim maturely responds, "Well, if Kourtney wasn't so difficult."

"If I’m out by four [o’clock], that’s all I need," Kourtney tells Kim, which seems reasonable enough to me. "If [I get there] and no one’s ready, and I’m, like, lingering around, I’m leaving at 4 p.m., and I don’t care what anyone says."

Fair enough! Kourtney has children. She has a smoking hot boyfriend. She has a life, Kim, and just because your schedule doesn't coordinate perfectly with hers doesn't mean that you guys can't find a compromising solution, right?

Kourtney's available when Kim is supposed to have a meeting, and Kim says that "unless she has her meeting at 7 in the morning," this isn't going to work.

"So do it at 7 in the morning!" Kourtney says, which to me, sounds like the perfect solution if Kim really wants to make the photoshoot she's planning work.

Kris gets all stern and tells Kourtney, "Be nice!" And I'm sorry, but wouldn't Kim shifting her meeting to an earlier time be the best solution for everyone involved? After all, Kourtney obviously had something planned prior to Kim's shoot, so it seems kind of unreasonable to expect Kourtney to overhaul her schedule when Kim won't do the same. Can someone explain to me why Kris is taking Kim's side on this?

It's at this point that Kim blows up at Kourtney, yelling, "No one wants you in the f*cking shoot. Get the f*ck out of here and go. … We don’t want you in the shoot."

Kourtney looks eerily peaceful while Kim lashes out, and tells Kim that she wasn't exactly jumping at the chance to be in the shoot anyway.

Am I not seeing this clearly? How is Kourtney in the wrong here?

Enter angel Khloé Kardashian, who tries to ease the tension by trying to put their silly fight into perspective by telling them to look at how much pain and suffering is going on in the world right now — but you can barely hear her over Kim shouting angrily at Kourtney. "Maybe if you had a f*cking business that you were passionate about, but you don’t, so don’t even act like you know what I’m talking about!" she screams.

It's at this point that Kourtney surrenders and leaves the room.

And if you think that Kourtney's lack of presence would stop Kim from hurling insults, you're absolutely wrong. "I need Kourtney to not be so f*cking annoying with a stick up her *ss like she f*cking runs this sh*t," Kim says. "Because she doesn’t. She’s the least exciting to look at."

I'm sorry? You mean to tell me that Kourtney Kardashian, a beautiful woman is not "exciting to look at?"

So Kim is saying that this face is totally boring:

I mean, really. So not interesting:

Seriously, such a snoozefest:

Clearly, I'm kidding. Kourtney, you are radiant and striking and very, very "exciting to look at" in my eyes.

You can watch the whole scene unfold below, but beware: Kim's claws may literally scratch you through the screen.

Ouch. Watching it is so harsh, but hopefully an apology was offered to all those involved in this heated argument, and everyone has since moved on from the whole debacle.

You know what they say about sisters: can't live with 'em, can't take a complete family portrait without 'em.